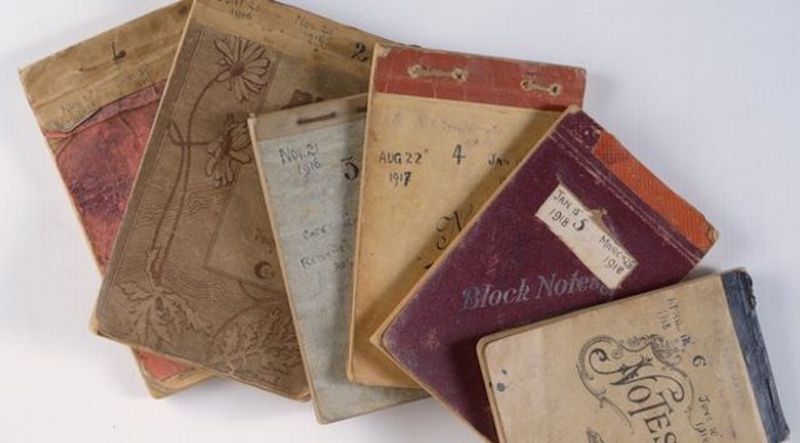 Meg Elison Stole Her First Diary and Never Looked Back

I stole my first diary.

I was just coming off a long stint of teenage homelessness and had landed a pity job in a lawyer’s office in Los Angeles. There wasn’t much to do; I learned to send and receive faxes, sign for packages, and send emails designed to stall for time. In the hours that swelled between tasks malignant with boredom, I poked around her office, since the internet was new and still mostly empty. I read depositions and looked over photos from her destination wedding in Italy. One day, in the bottom of an impacted drawer, I found a lime green cloth-covered journal with the price tag still stuck to it. The lawyer I worked for had written a single entry, dated four years before. I read it furtively, and then closed the cover. I was hungry for something, but it wasn’t a voyeur’s thrill. The diary seemed like a portable chunk of her lawyerly life; a tangible class marker, the accessory of a type of professional, well-adjusted womanhood that seemed totally unattainable.

I cut that lone entry out with a razor and fed it through the shredder. The book thus cleansed, I began to write.

Of course, that wasn’t my very first diary. I was born an American girl and I had been gifted a handful of sparkly pink Lisa Frank diaries over the years, their tiny tin locks with their aluminum keys destined to be lost. The diaries were lost, too. We lived in the kind of poverty where my mother would wake me in the middle of the night and tell me to pack my school bag with the most important things, because we were never coming back here. My first diaries did not make the cut.

But that first stolen volume became truly mine. It’s dated from the last millennium and I still have it. If I had to pack a bag tonight, my diaries would be first on my list.

I had been a reader of diaries long before I began in earnest to keep one. When I first discovered Anne Frank, I assumed one was only allowed to read the diaries of the dead. I devoured histories delivered in journal form: Esquemeling among the pirates, Pepys and his encrypted sins. When I was older, I sought out Anais Nin and Susan Sontag. Sexy diaries added another layer to kind of history I could study, but the thrill was the same. I was learning about fallen worlds from people who were falling through them. I have never read the diary of a person I know; it’s how I hold up my end of the bargain. I don’t want them reading mine.

Mostly I don’t want anyone reading my diary because I use it to process things I don’t want to say out loud. There are things that the truly honest can tell their friends, that desperate people will say to anyone who will listen. It’s painful and grueling to accept the life stories and operatic, performative tragedies of friends and strangers, to hear the bottomless aching need behind their tearful words and pointless regrets. After I’ve heard those things I sometimes feel an intimacy, engendered by my empathy or identification with their struggles.

However, strangers sometimes steamroll unwilling listeners into accepting recounted trauma; an act by which the storyteller carves out their own diary in the flesh and spirit of the beholder. These conversations are hard to avoid as a woman and harder still to end once they’ve begun. When I am written upon and made to play the role of Dear Diary without my consent, I only feel disgust. It’s as if I’m receiving email after email containing some truly unflattering or perhaps incriminating nudes. I don’t hand those out. I don’t force anyone to look or listen. I want to be embarrassed and naked alone, so I paste them in my diary.

Aside from containing my shame and boredom, aside from this gross processing function, my diaries have become a physical extension of my memory. I’ve been able to mark major eras in my life by looking back across nearly 20 years of diaries, even if I never open their covers. I can see the broken spine in the one I schlepped around Europe after dropping out of high school and overstaying my visa. There’s one that smells like the mouth of a river, from the years that I lived in Portland and wrote in the rain. There are the grimy ones I filled in taking my breaks on a gummy card table in a succession of grinding retail jobs.

When I am brave enough to open them up, I know my first heartbreak is in there. My feeble, stunted attempts to figure out why I had been abandoned by both my parents. The glossy scissored photos of the people I wanted to be. The puerile attempts to form a code by which to live. I’d like to think that they’re better now; more adjusted to reality, less maudlin and histrionic. I keep writing. I keep thinking it’s a gift to my future self.

I buy my diaries now. They’re all in the same style as that first purloined letter to the self, but I’ve found better colors since. I use archive-quality acid-free ink, hoping to outlive Pepys in every sense of the word. I see them as the proof of living, of having left behind lives very different from the one I have now. I don’t look back often. Instead, I write characters who keep diaries and make them do it better than I do. They do it every day, they keep a chronicle. The world falls and they fall through it, and they remember to write it all down. My own diaries may never be published, but at least I’m contributing to the canon of diarists, one way or another. I write the diaries of people who never existed, except in my head. To keep track of who they are, in their own words.

Another diarist, Joan Didion, once mentioned that she had already lost touch with a few people that she used to be. I have, too. I think we all do. But those of us who keep diaries still know how to get a hold of them, if we need to.

Meg Elison’s The Book of the Unnamed Midwife is available now from 47 North.

Meg Elison is a Bay Area author and essayist. Her debut novel, THE BOOK OF THE UNNAMED MIDWIFE won the 2014 Philip K. Dick Award and was listed as a Tiptree Committee Recommendation. Her second novel, THE BOOK OF ETTA, will be published in spring 2017 by 47North. Her work has appeared in The Establishment, Liquid Imagination, Compelling Science Fiction, Everyday Feminism, and many other places online and in print. She writes like she's running out of time and lives in Oakland. 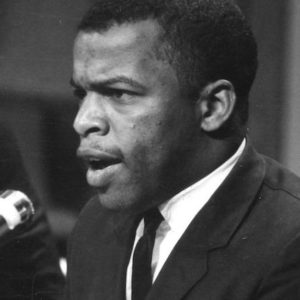 On November 16, John Lewis—along with his collaborators, co-author Andrew Aydin and artist Nate Powell—won the National...
© LitHub
Back to top