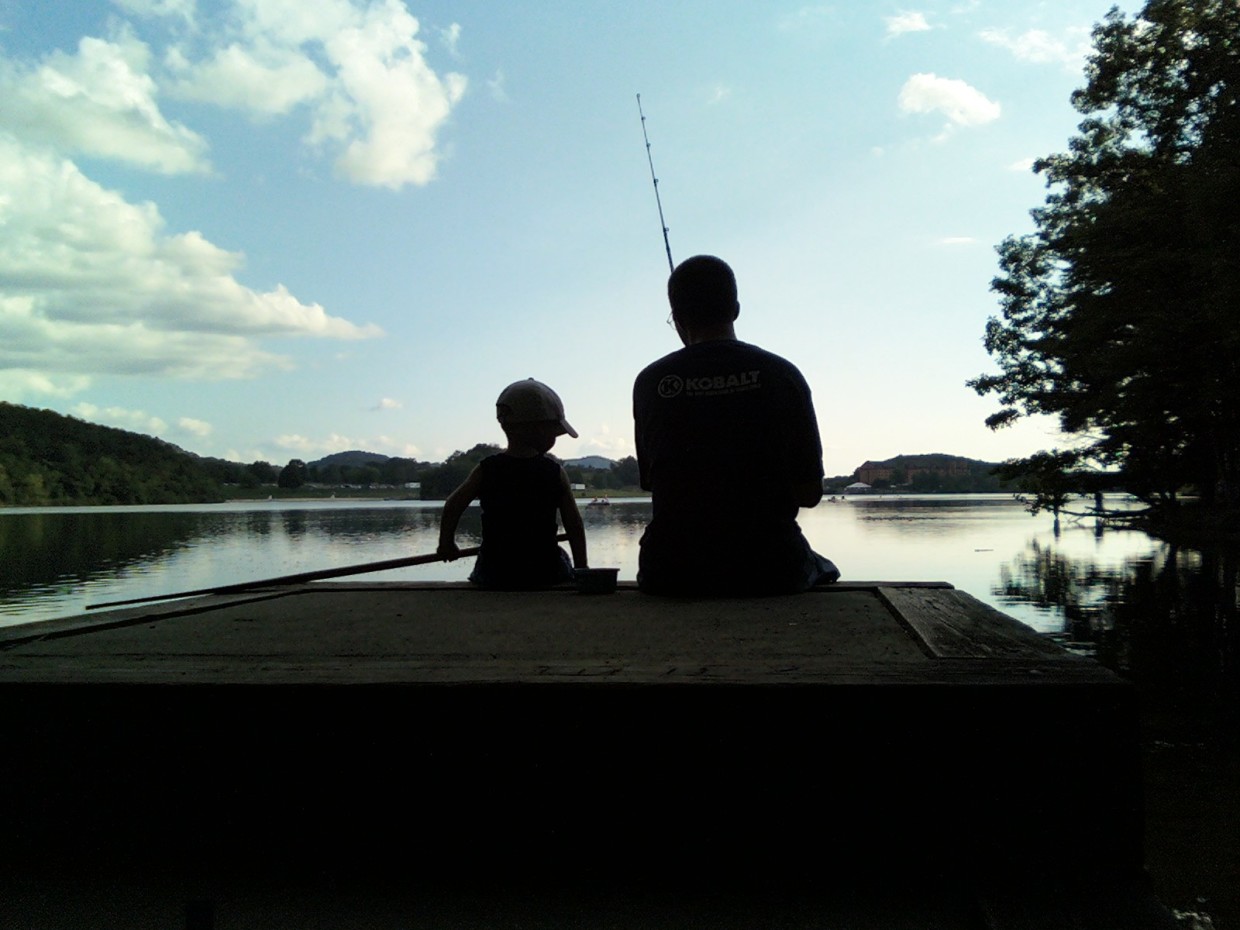 On Chest Hair and the Mystery of Fathers

One hot evening this June, a friend, the poet Joseph Millar, read his poem “Near the Continental Divide” to the crowd assembled in Pacific University’s McCready Hall, a great sloping room named for a Midwestern lumberman who made good in Oregon and in the 1930s became a trustee of the school. The poem is collected in the book Overtime.

Joe’s voice is gravelly but uplifting—light and stony, it reminds me of limbs after hard work—and can be halting in conversation. He wears a white goatee. A minute or so into the poem, which is about his father, Joe recalled:

When I was twelve I didn’t want to be President

or King of England. I didn’t want to be in movies

like my children do, lying dazed in the TV’s astral glow

listening to the guitars. I wanted hair on my arms

and big shoulders. I wanted to be a man like him,

In the midst of these lines I patted my pants pockets for a pen, then fished around in my bag, before making some notes, a reminder to find the poem in a book, to ask Joe which one. I scribbled,

son. There is a line in the poem about chest hair.

Of course there is no line in the poem about chest hair. I’m the one with chest hair. My own arm hair is light and fine.

Therapists will tell you we use psychological projection, the attribution of one’s own characteristics to someone else, as a defense mechanism.

My father, who was a teacher, died more than thirty years ago now. He was thirty-nine. I was five. My son, who is four, was born May 29, 2011. My father died May 30, 1982. I hardly knew him. I’ll be thirty-nine this year, on September 8. There will be a few important months next summer when I’ll be thirty-nine and my son will be five. I hope I don’t die. Then I’ll turn forty.

Therapists will tell you that coincidences, or synchronicity, are sometimes distorted or exaggerated.

I’ve taught with Joe at biannual residencies since the summer of 2013, so I may have heard him read “Near the Continental Divide” before that night in June. I may even have been moved by the poem before—such is the ephemerality of memory and emotion. We have all been moved, deeply even, by something we’ve now forgotten. Therapists will recommend that, when they come, memories and emotions be written down, so that they won’t be forgotten again, so that they can be worked on over time.

During these residencies, faculty and students are kept very busy. My own days begin with a Skype call to my wife and son while he eats oatmeal cooled by frozen blueberries; with the three-hour time difference, this means I’m up by quarter past four. By nine I’ve showered and dressed; I’ve eaten, had coffee.

For the next twelve hours, we teach classes and writing workshops, attend lectures and the defenses of master’s theses; we all eat lunch together in the university cafeteria, and each night for a week the faculty—poets and fiction writers, we dabblers in fact—present work both old and new in McCready Hall. We all agree it really is a beautiful room. At the ends of days like these my mind can swim; and after a few of them in a row, the days blur together.

This past June, Joe read at midweek, I know; his name is listed there in the printed schedule. And either that night or the next day, I approached him—caught him in a corridor, is my memory—to tell him how much I’d enjoyed his poems.

Something else came out first, though. “I took some notes during your reading,” I said, “during the poem with the chest hair.” This must have confused him. “I don’t think I want to be a mystery to my son.” It all came out very fast.

Joe, unfazed, said, “I want to talk to you about that.”

About that, as if he’d anticipated what I’d said, as if he’d somehow been warned. As if he’d had this conversation before. I want to talk to you about that.

But there was no time to talk then. Others were around. And so, for the next few days I kept my eye out for an opportunity to see what he had wanted to say. He found a moment to tell me to buy Overtime, which I did, and which he inscribed: “For Scott—a son and a father—Have many poems in your life. love, Joe.”

Then, Sunday morning, our time together over, I boarded a flight from Portland to New York’s Kennedy airport. Joe and I never did talk.

In “Near the Continental Divide” Joe says goodbye to his father for the last time. They’re together at an airport in Colorado, and Joe, “unwilling to park and linger,” looks on from the front seat of a black Oldsmobile while his father stumps through the doors of the terminal. His father has just stuffed two fifties in the car’s ashtray after insulting his son’s poems. “Keep firing,” he says and then flies away east, from Denver to Pittsburgh: “It was August, almost time / for his classes.” Joe drives west into Utah. His father was a teacher.

My son sometimes says he wants to be a teacher; he wants to bring his book about weather to my classrooms and tell my students how storms are made. About hail. We can teach together, he says.

Most days, though, he wants to do something else with his life. The typical things—building, collecting trash, making deliveries, putting out fires. He calls the men and women who do these things “workers.”

Joe was a worker. He’s fixed telephones and caught fish for a living. Before he climbed on stage that night, Joe’s poems were described by the writer Josh Cook as the “lonely, late-night songs of the 9-9 shifters, the divorcees, the fishermen, the framers, the callused, the weary.” The poet Madeline DeFrees considers the writing in Overtime “some of the best poems about work since Philip Levine’s.” I don’t have the experience with poetry to say one way or another. But the poems do work on me.

Given what I know about memory, were I to ask Joe today what he’d wanted to say after I’d come to him in a corridor with the fear of being a mystery to my son the way his father was to him, talking about my chest hair, asking about a poem, I doubt he’d remember. Not because he’s old, though I do take some comfort in that, my relative youth against his advancing age. It’s good to know older people; they make death seem farther away. Having a son immediately makes it feel closer, of course.

No, I doubt he’d remember simply because it’s very easy to forget. We all do it all the time.

“Near the Continental Divide” was originally published in 1997 in a Hawaiian literary magazine called Mānoa; back then the poem had shorter lines, and nearly thirty more of them. And back then Joe’s father wasn’t draped in mystery, he was full of it.

I wanted hair on my arms

and big shoulders. I wanted to be

Mystery was not his cover but his essence. The difference is profound. And while the line is more beautiful the way it is now, it seems to me less true. Joe must know this. Though perhaps he forgot.

Because what I imagine he had wanted to tell me, and what I already knew when I arrived home to my wife and my son, is that it won’t matter if I live beyond those months next year when I’ll be thirty-nine and he’ll be five. He’ll still grab my chest hair on the beach, wanting it, wanting to be a man like me, and I’ll still be unknown to him. He’ll grow his own chest hair someday and want to be someone else entirely—a worker, an engineer—and I’ll remain, in some inescapable way, a mystery. Just as my father, had he lived, would have remained to me.

Now that I know the poem well, now that I’ve returned this summer to the East Coast and settled down—to work, into the routine of family—a part of me wishes I had not scrambled to write the notes I did during Joe’s reading. I wasn’t paying attention as he neared the end. All he might have wanted to tell me, to calm me down, he’d actually already said.

Whatever it was he gave me, in the early years

after my mother died,

to believe in the world’s sudden reckonings,

A religious friend has told me that the death of his mother and the birth of his son more than a decade ago registered as the very same experience: God, the mysterium tremendum et fascinans, tore the roof off the rooms he inhabited with them as one left the world and the other came into it, months apart. These are some of the world’s sudden reckonings—life ends and life begins, proof that we are alone—and I believe in them. And while God does not tear off the roofs of the rooms I inhabit, what’s mine now—through poetry, friendship, a young son, a dead father, a wife—is something often associated with God. We do require the fierce kindness of others—the surprise of grace, a gift we can’t deserve—to believe through the world’s sudden reckonings, beyond the mysteries we are to one another. And that same kindness is required of us. This is what Joe wanted to talk to me about.

Because somehow, perhaps through sympathy—through knowing we all have bodies that sprout hair and are fragile and will die—we can be grateful to one another for our kindnesses, for our grace. Gratitude is all we have in the face of being alone, when we’re all so fiercely full of mystery. When all we can do—and all I really ever want to tell my son—is to keep firing.

Scott Korb is the author and editor of several books, including Light without Fire: The Making of America's First Muslim College, now out in paperback. He is on the faculty of Pacific University's MFA in Writing Program and lives in New York City.
http://www.scottkorb.com 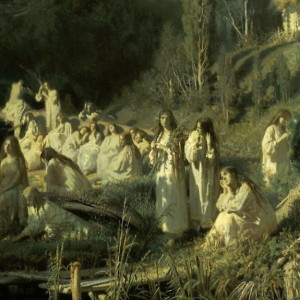 The stories we tell have a way of coming back around to us. Fairytales, myths, urban legends–they’re more than just...
© LitHub
Back to top