On Black Pessimism and George Floyd

There is a long scene in Those Bones Are Not My Child (1999), Toni Cade Bambara’s posthumously published novel about the Atlanta murders of 1979-81, where she describes the 1980 explosion at the Bowen Homes Daycare Center, a nursery in a mostly black community:

“See about that guy,” Lafayette said quietly to Speaker, motioning his chin in the direction of the man in the tattersall vest carrying a child in his outstretched arms. Part of the boy’s head had been blown away. “Wh-where the fuck the police?” the man kept saying as one of the rescue medics tried to get a pulse, then tried to take the child from the man. He resisted, still stammering the question. Two medics worked on the child.

“Let me have him, brother,” Speaker said gently.

“Wh-where the fuck the police?”

Teachers run to classroom windows, searching “for signs of cannons or tanks attacking.” A woman says she saw two white men on top of a building near the nursery earlier that morning, a foreign sight in that neighborhood, and called the cops. They didn’t show. One character says to another, “Ain’t satisfied killing them one by one—now they feel they gotta blow ’em all up at once.”

The explosion, which resulted in the deaths of four black three-year-olds and one teacher, was officially blamed on a faulty boiler. Amid an epidemic of child disappearances, however, the incident reminded many black onlookers of 1963, when white supremacists bombed a church in Birmingham, Alabama and killed four African-American girls.

Residents who lived near the nursery weren’t satisfied with the city’s response. They were already concerned that their children were being swept up by… who exactly? The KKK?  Occultists? Child sex traffickers? White vigilantes? Vietnam vets? Cab drivers? Unfamiliar dog walkers? Or, as Bambara wrote, “anyone capable of lulling a child into carelessness or ordering a child into obedience.”

The black conspiracist’s imagination is a perfectly refined pessimism, one that offends liberal hopes for social progress.

The Atlanta serial murders led to one of the most baffling and divisive criminal investigations in American history. The case was recently reopened by the city of Atlanta. One of James Baldwin’s last books, The Evidence of Things Not Seen, came out of his own inquiry into the murders on assignment for Playboy.

Baldwin’s book is the one most often mentioned in commentaries about the recent HBO documentary miniseries Atlanta’s Missing and Murdered. The show suggests (but does not definitively claim) that Atlanta’s initial investigation was botched from the start. The conviction of Wayne Williams, an African-American man, rested on the murders of two of at least thirty victims—both of them men, not children. Only later did police attribute some of the other murders to Williams. Ask a room full of people familiar with the case who they think did it, and you’ll get scattered responses.

Baldwin’s book is moving, but in focusing on a broad miscarriage of justice rather than on the overwhelming specificity of the murders—and the fact that no conclusive evidence has ever been offered to resolve them—it can’t accomplish what Bambara’s book can do for us right now, in the wake of unrest in cities across the country: outline the particular ways that prolonged injustice fuels black anger and justifiable paranoia.

I was thinking of this line that appears early in Bambara’s novel a couple of weeks after a contentious family group thread, in which one of my relatives shared a trailer for Plandemic, a widely-circulated conspiracy video about the coronavirus from a discredited scientist. He had also included a link to the website of a racist fearmonger. The headline read: “Globalists using COVID-19 to usher in UN Agenda 2030 ‘Brave New World’ ten years ahead of schedule.”

I am African-American, as are most members of my family, including this relative, a former Marine. I care for him deeply, but this wasn’t the first time he subscribed to popular conspiracies. One of my older cousins, although less politically conservative than the Marine, echoed concerns about a government plot to weaponize the coronavirus against communities of color.

My instinct was to take a haughty stance. I rarely responded, only occasionally inserting data about the spread of the coronavirus provided by the World Health Organization.

I was settling into my shelter-in-place routine when Ahmaud Arbery was killed on-camera in Georgia. The arrests of the men involved came months after the death, following public pressure in response to the video. Then, weeks later, a white woman in Central Park called the cops on Christian Cooper, a black birder, and openly lied about being in danger, again on video.

What began as twistedly sort of funny in Cooper’s case quickly lost its humor. The same patterns of certain whites acting to destroy black lives with carte blanche endured even as the pandemic took an axe to the financial and bodily well-being of people of color around the country.

Where was the most acute threat coming from? From the sky, like kerosene bombs over Tulsa’s “Black Wall Street” in 1921? External subversives? (Today, instead of commie bogeymen, we are afraid of neo-Nazi infiltrators and Umbrella Man.) The disease or the precinct, the Facebook news feed or Twitter? And if the answer is both all of the above and things you can only imagine? The fuel of Bambara’s exhaustive, nearly 700-page novel is perpetual uncertainty. Those Bones Are Not My Child showed how “fringe theories,” particularly in aggrieved black communities, can be reasonable responses to illogical events.

In the wake of a particular kind of hopelessness, the phenomenon of black death, or a case that is never closed, only offers time for answers, terrible possibilities and speculation. The thing that killed George Floyd, besides the cop’s knee—supposedly his paying for cigarettes with counterfeit money—is absurdly contrasted against the thing that could’ve killed the birdwatcher Christian Cooper—asking a woman to put a leash on her dog.

The black conspiracist’s imagination is a perfectly refined pessimism, one that offends liberal hopes for social progress. A riot is what happens when the kid doesn’t come back home and bureaucracy gaslights a family with process and best practices. The irony is that riots obscure their own inner-workings; we will probably never disentangle the peaceful protestors from the looters. We won’t be able to calculate how many windows were busted out of grief as opposed to bad faith.

Bambara’s description of a child suffering from dissociative identity disorder can be tacked onto the US as a whole: “Sometimes . . . trauma caused a separation, a split, and barriers grew up between the parts of the self […] Worse, those barriers could harden and the former core self be banished to the wings, leaving a minor player to hold center stage ever after, with only a portion of the life script.”

When will it end? When will the tipping point come and the script change? Mothers in Atlanta will advise against holding your breath. 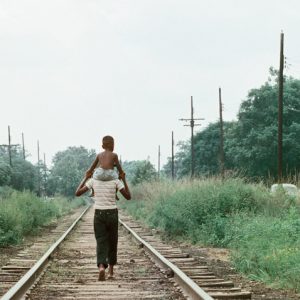 “Warriors are poets and poems and all the loveliness here in the worlds,” wrote Amiri Baraka in his great poem, “Black...
© LitHub
Back to top