On Bad Bosses and
Killer Dresses

The Material Horror of Peter Strickland's In Fabric

Early in 2019, cult skincare brand Deciem announced that it was “boycotting” Black Friday that year, citing “hyper-consumerism” as “one of the biggest threats to the planet.” Instead of participating in the one-day frenzy, they offered discounts throughout the season. They’re not the first company to do so: outdoor outfitter REI has closed its stores on the day after Thanksgiving for the past five years. One can envision a future where emphatic gestures like these become the norm among “socially conscious” brands.

But the spurning does little to address the problematic nature of seasonal spending, which encourages people to shave from their savings at a time when end-of-year raises and bonuses (or lack thereof) weigh heavily on the mind.

British auteur Peter Strickland’s In Fabric (2018) invokes the holidays often, taking place in the days and weeks following Christmas (in an interview with Film Comment, Strickland explained that he sought to “find the most prosaic setting [he] could think of”). It has always seemed like the briefest mentions of Christmas in American films beg a concurrent release. Between Thanksgiving and New Year’s, moviegoers demand that even their entertainment be gift-wrapped. Released in Strickland’s native England last June, In Fabric’s stateside release was in early December 2019.

The timing of In Fabric’s American arrival risks turning its critique onto itself. At first blush, it’s an anti-consumerist fable that follows a cursed, “artery”-red dress that murders everyone who possesses it. The price of a movie ticket, after all, is also a purchase, and a byproduct of entertainment’s marketing machine. But the bogey of In Fabric is more diffuse than a red dress or materialistic excess. Strickland is interested in the subliminal, capitalistic forces that urge consumers to consume.

Equally indebted to Ricky Gervais’s The Office (2001-2003) as it is to Dario Argento’s witchy spectacle Suspiria (1977), Strickland’s film explores issues related to labor and “retail therapy,” cleaving into both concepts and exposing their entwined guts. When employers intrude upon employees’ personal lives, In Fabric postulates, they force a co-dependent relationship between business and pleasure.

In Fabric tells two stories. In the first, Sheila Woolchapel (Marianne Jean-Baptiste) is a divorcee who spends her days dutifully tending to her till at Waingels Bank and her evenings combing the Lonely Hearts ads of the local newspaper. For a first date, she treats herself to a haircut and a trip to a local department store, Dentley & Soper, whose post-holiday sales are advertised in hypnotic TV spots.

There, she’s greeted by Miss Luckmoore, an impeccably made-up vamp who bears an uncanny resemblance to the store’s mannequins. “The hesitation in your voice, soon to be an echo in the recesses of the spheres of retail,” she purrs as Sheila browses. Speaking in language that seems clipped from vintage perfume ads, she persuades Sheila to buy the comely red dress that sets the film in motion.

Peter Strickland has cautioned against viewing In Fabric as a morality tale.”

Beginning with a scabrous rash, the dress begins to torment Sheila. It destroys her washing machine and floats through her house at night. The haunting at home is juxtaposed with relentless, gendered criticism at work, doled out in regular intervals by two buffoonish middle managers. She’s chastened about the “meaningfulness” of her handshake and the amount of time she spends in the bathroom before “feeding time.” Delivered as pillars of the “Waingels Wavelength,” these critiques are so recognizably absurd that they lead us to wonder if Gervais’s Office, too, was intended as horror-comedy.

“In [Sheila’s] shoes I would buy two such dresses, given the way she’s treated at work,” Strickland has chimed. Fashion as a form of self-expression and realization is an advertising tactic that targets women more often than men. The markup on designer wares is unjustifiable unless buyers can be sold a lifestyle along with it. Strickland’s portrayal of Sheila as a sensible woman prone to buying items on sale conveys the omnipresent effects of the industry’s messaging.

Sheila purchases the dress with funds that her paycheck affords and, eventually, pays for it with her life in a Psycho-esque, midway narrative twist. Her former employers are quoted in her obituary, noting how she “perfectly encapsulated the Waingels Wavelength” and announcing a bowling contest to be held in her memory.

The dress next falls into the hands of soon-to-be-weds Reg (Leo Bill) and Babs (Hayley Squires). Reg is the first to don the thrifted dress, forced by his buddies and future father-in-law during a nightmarish stag party. Later, Babs gives it a twirl. Like Sheila, Reg, a mechanic, is treated abysmally at work. His manager is a kind of mob boss as opposed to Sheila’s; her managers’ white collar conviviality obfuscates a dangerous disregard for boundaries.

In one scene, Reg is (wordlessly) confronted by his boss for not inviting him to his stag party. Observing Reg interact with his silent, pit-bull superior begs the question: Whose boss is worse, Sheila’s or Reg’s? Does it even matter? In having multiple protagonists, Strickland conveys the randomness of the dress’ curse. None of its victims can be called fashionistas, yet all are affected by the clothes they put on their body, willingly or not.

For the film’s climax, Strickland stages a sendup of the sort of cell-phone-captured shopping brawls that spring up in holiday news reports every year. A hair-snatching fight between two women over their place in line at Dentley & Soper devolves into looting and, eventually, a five-alarm fire. Miss Luckmoore escapes by descending underground in a dumbwaiter. Passing each subterranean level, she spies on the dress’ victims, all wearing identical drab uniforms and stationed at sewing machines, threading red frocks. Reg, once again wearing a dress, stands out—he looks like he’s here by mistake.

The cinder-block, windowless hellscape they inhabit is reminiscent of a sweatshop. On a final note, Strickland draws attention to garment work, depicted as a women’s prison. The origin of the dress’ evil, he suggests, is in a sweatshop. Strickland has said that he considered including an expository scene in which a sweatshop laborer curses the dress. Instead, he’s opted for a more oblique critique. In In Fabric, workplace injustice trickles up. Retail-based enslavement produces items that the film’s comfortably middle-class protagonists, themselves metaphorical “slaves to the wage,” inherit.

The department store is an eroticized, sensuous space that appeals to workers deprived of intimacy and forbidden from having personal lives as a condition of employment.

In what appears to be a ritualized chore, Miss Luckmoore bathes an anatomically accurate mannequin. Catching the store manager’s lascivious gaze, she brings her hand to the doll’s genitals as he moves his to his own. Parting its labia, she reveals that it’s more lifelike than we could have imagined: it’s menstruating. Touching her bloody hand to her lips sends her boss into a spasm.

Sheila, abandoned by her husband, harassed at work, and discouraged by icky responses to her dating ad, buys the demonic dress in earnest pursuit of romance. Babs tries it on in a transparent attempt to excite her fiancée. Even Reg, who seems like the sort of bloke who makes a beeline for the nearest sitting area every time he enters a shopping center, isn’t immune to the “panoply of temptation” that a window display can elicit. Passing by the department store one evening, he’s paralyzed by the sight of plastic legs in hosiery. Briefly transported back to childhood, he recalls a fitting room attendant dressed in sexy stockings kneeling to zip his jumper.

The department store is an eroticized, sensuous space that appeals to workers deprived of intimacy and forbidden from having personal lives as a condition of employment. In setting the film in 1993, Strickland slyly shows that the “always-on” mentality toward work is much older than smartphones. It’s at least as old as “‘informal’ check-ins’” and performance reviews, which effectively grant employers license to demand overtime sans pay.

Brands have seized upon the concept of personal empowerment through spending. Under the auspices of “self-care,” they market items whose costs gobble up paychecks, tethering employees to the very work that calls for an antidote. This cycle of behavior, Strickland posits, is all-but inevitable for the average employee-consumer.

Strickland has cautioned against viewing In Fabric as a morality tale, emphasizing that the ill fortune of its main characters should be ascribed to “no judgement, no logic.” Sheila, Reg, and Babs are obviously not the villains of the film. Sheila’s managers and Reg’s boss neatly fit the mold of antagonists. Miss Luckmoore, part-time mannequin, is a more confounding foe. Half-human, her raison d’etre is to perform the duties of her job. It’s difficult to place blame on her without implicating the film’s other characters, who are shown participating in a system that exploits workers of the lowest level.

Dehumanization, Strickland suggests, is woven into the very fabric of the clothes we wear to work every day. In this way, perhaps all mass-produced items are cursed. Our punishment is the insatiable desire to possess more of them and an inability to recognize the true cost.

Elizabeth Horkley is a freelance author specializing in film history and criticism. Her byline has appeared in Hyperallergic, Los Angeles Review of Books, Screen Slate, The Atlantic, and The Baffler. 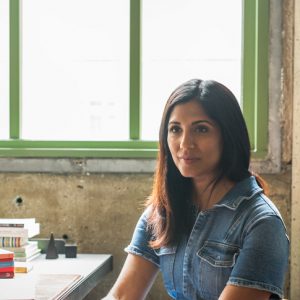 The folks behind Belletrist—which is so much more than a beloved Bookstagram account—are debuting a short video documentary...
© LitHub
Back to top