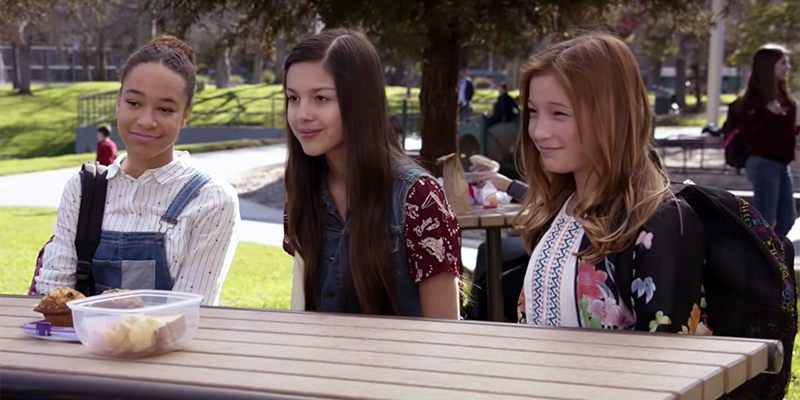 She included a GIF from a brief moment in New Girl, lost to the annals of history, from season 6, episode 18. In this episode, Olivia Rodrigo has her first-ever TV appearance as a slightly disrespectful middle school student. Zooey Deschanel plays Jessica Day, the newly appointed principal. She is having a real dickens of a time connecting with the youth. (It’s brutal out here.) Then she overhears a few of her students talking about this young adult novel they’re obsessed with: The Pepperwood Chronicles.

For those of you who have been living under a rock—or have much better things to do than re-watch the entirety of New Girl twice during this pandemic—The Pepperwood Chronicles is arguably one of the best fictional novels on television, penned by Nick Miller, the most relatable fictional author of all time who has honestly taught me a lot about writing.

Hoping to improve her reputation with her students, Jess invites Nick to speak to this cool-kid clique—which, again, includes the Olivia Rodrigo. Anyway, all this time, Nick thought he’d written a hard-boiled noir when in reality he’s produced a wonderful young adult novel. (You could say its their favorite crime.) What starts as a favor to Jess ends up being a helpful writing workshop for him. The girls take some creative (drivers) license and pitch him a few ideas for sequels.

What starts as a fun idea goes horribly awry, like every sitcom plot ever (deja vu). Jess finds out that he’s meeting with her students behind her back (traitor), and they disrespect her more now than ever. (1 step forward, 3 steps back, amirite?)

Anyway, it all gets resolved. Nick talks to the cool kids, and they apologize. (I hope this somewhat rushed plot summary is enough for you.)  But the point I’m really trying to make is Olivia Rodrigo started her career playing a book lover. Celebrities—they’re just like you!