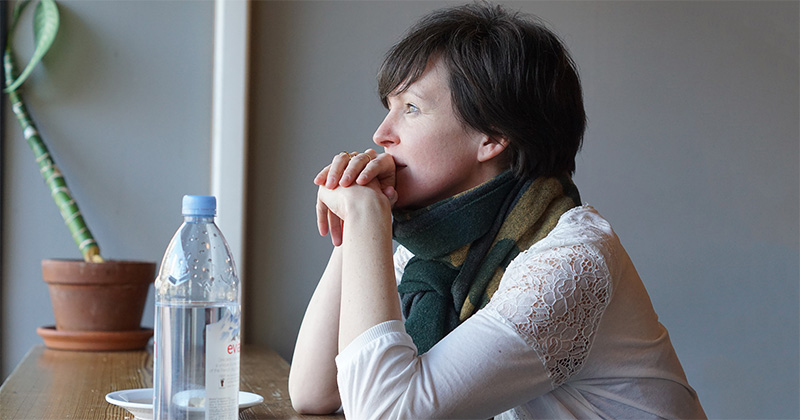 The Lonely City Author on Changing Fortunes and New Media

At a cafe on East 9th Street, Olivia Laing took momentary refuge from the wind. In her 2016 book The Lonely City, she’d written about this very spot, which “looked out over a community garden planted with an enormous weeping willow” and was “populated almost exclusively by people gazing into the glowing clamshells of their laptops.” Once she’d walked this neighborhood—past the Temperance Fountain and dog run of Tompkins Square Park toward the coming-into-season trees. Once, right here, she’d been in the business of “inhabiting loneliness on a daily basis.”

But today was a bright March day, in a new political era, in the year 2018, and circumstances change, and circumstances change people. This slice of time at this East Village cafe was an interlude from the filming of a PBS arts and culture show—a bracket of introspection in a day that had begun with an early-morning interview in a Midtown studio. Is the world about to end? she’d been asked by the host, and she had laughed, then paused, then answered—wrangling her way around to hope inside the fabric of current politics and tweets.

She spoke about the assailable rigidity of binaries. About a childhood she has referred to as queer. About the ways in which her work as an herbalist and an artist’s model shaped her view of the body, and the stories we tell about ourselves. “I think having the poles of femininity and masculinity and being allowed to move freely between them or situate yourself wherever you’re comfortable on that is totally fine by me,” Laing said. “That seems to be a much more true understanding of what gender is like: that there are people who occupy one position very solidly, and there are people who move very fluidly. My gender has always felt very fluid to me. It felt like that as a child and it feels like that now.”

Lately, she told the interviewer, she’d been modeling again, for her friend Chantal: “So, she paints and we just talk really intensely about what we’re doing. She’s the most brilliant person and the kind of conversations feel really stimulating in a way that I don’t think it is talking to another writer. There’s something about the gulf between our mediums, but the similarity of our own intentions that feels really exciting.”

An emphatic radiator groaned at times, burbled, and, huffed. It had no dominion over her.

After the interview, there’d been a half hour of half sun and a half sandwich in Bryant Park. She filmed B-roll in the stacks of the New York Public Library and in a walk through the carved-out streets of the city, and then there was more camera choreography in the flare of Times Square, where neon reflections scrolled across her dark shades and the wind lifted her bangs. In a sign behind her head, DYNASTY abbreviated to NASTY, and she turned just so and smiled. 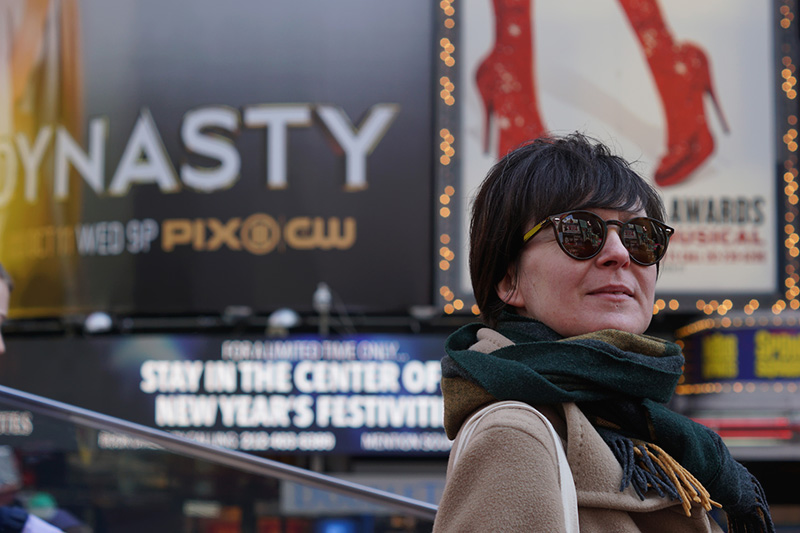 Photo by the author.

But now, in the quiet of the cafe, she pointed to where the willow she’d written of had once been. Gone now.

She savored the last of her cookie. Waited for the cameras to return.

Laing is used to this now—the cameras, the interest, the ways in which those of us who have read her books declare her an exemplar, ask for just that much more. She lassoes the big questions in the books she writes. She floats the contours of loneliness, unchains alcohol and creativity, radicalizes remembering, interrogates black outs and black holes and multiple versions of the same truths. If her case studies in To the River, The Trip to Echo Spring, and The Lonely City—Virginia Woolf, Tennessee Williams, John Cheever, Raymond Carver, Andy Warhol, David Wojnarowicz, others—have been artists and outsiders, her culminating themes have turned on stitchery and seams, kindness and love.

Laing spent five patchwork years living in at least twenty different New York City rooms—an unreconstructed tenement, a walk up, a plush hotel suite, a perch off the shoulder of Times Square. The landscape has provoked from her sentences of startling beauty.

Manhattan has been, in her pages, “that teeming island of gneiss and concrete and glass” and “that city of glass, of roving eyes.”

Or, from The Trip to Echo Spring:

The city impressed itself on me by way of a repeating currency of images, a coinage of yellow cabs and fire escapes, brownstones hung with wreaths of conifer and ornamental cabbage tied up with tartan ribbon. Delis stocked with smoked pigs’ legs and wheels of giant cheese. Plums and mangoes stacked in crates. Fish on ice, heaped in delicate, slippery piles of coral, silver, flint and grey.

From The Lonely City:

The city reveals itself as a set of cells, a hundred thousand windows, some darkened and some flooded with green or white or golden light. Inside, strangers swim to and fro, attending to the business of their private hours. You can see them, but you can’t reach them, and so this commonplace urban phenomenon, available in any city of the world on any night, conveys to even the most social a tremor of loneliness, its uneasy combination of separation and exposure.

In the years since Laing wrote those scrupulous, evocative sentences, she has surrendered American rootlessness for a proper British home, solitariness for marriage (to the poet Ian Patterson), the complicated life of an artist still arriving to the complicated life of a writer now arrived. She is one of eight writers Yale recently named winners of the 2018 Windham-Campbell Prize, and she is the author, now, of a novel, Crudo, due out this summer in the UK and this fall in the US. A new nonfiction book, Everybody, which emerges from her interest in “the actual experience of living inside the body,” is in the making, and at many turns, she is asked for more. She looks ahead and she looks back. She gives.

“Laing is used to this now—the cameras, the interest, the ways in which those of us who have read her books declare her an exemplar, ask for just that much more.”

“I always felt like I had no money,” she said, in that Midtown studio. “I was really up against . . . making my art from this very pure, ethical place. That felt good to me. It did feel like I was very outside, and I’m not now. I’ve had the sort of establishment pat on the back in a way. I’m incredibly gratified by that because it feels like I am writing about these difficult experiences and communities of people who have been excluded for various reasons. So, there’s something really amazing about that. Turning around and offering hands up feels like an important thing for me to be doing [now], especially with trans and queer kids who are coming up and writing more and more. That’s something over the last couple of years, I’ve put much more effort into trying to give people the assistance that people gave me.

“This is another thing about adulthood, isn’t it? That you reach a point where you’re like, Hang on. I’m not the supplicant in the situation anymore. I am actually a person who’s got more power and more agency and I can help out.”

Crudo, which Laing wrote in seven weeks, serves—novelistically, truthfully—as a transcribed record of how it felt to live the summer of 2017 accosted by news and trying to decide where any human being might be safe. Laing had been reading a biography of the experimental novelist Kathy Acker when she began to write, and Acker filtered in, to the page. “She writes about intimacy,” Laing said. “She writes about war. She writes about violence and she writes all the time about what it is to be an artist. So, we sort of fused. The characters fused. Sometimes it’s my biography. Sometimes it’s very much hers. It’s this sort of fictional construct that shares elements of both of us.”

Is it possible to live at the possible end of time? Crudo asks that question. Laing does. But on this crisp March day, it is not yet the end of time, and at the cafe window in her old neighborhood, she sat, and I watched her sit. I thought of a line from Crudo—“you do not realize how irritable you are”—and tried to imagine her as anything but the steadfastly prepossessing person I first met in the lobby of the studio building. She began laughing: so many mirrors. I laughed too.

“She wanted,” Laing writes, in Crudo “to write another book, obviously, and she wanted to find a way of situating it nowhere. Nowhere like the interior spaces of the body, nowhere like the dead zones of a city.” I had wondered, when I read those lines, just what precisely Laing might have meant. How one, especially Laing, with her landscapes and views, centers a story in a nowhere place, an unseen corner. But then I thought, as the film crew made its way at last to the cafe, that all Laing or her doppleganger will ever have to do is sit down and write the story. She alone is place enough.

Why Is Caring About Fashion Considered Unserious? 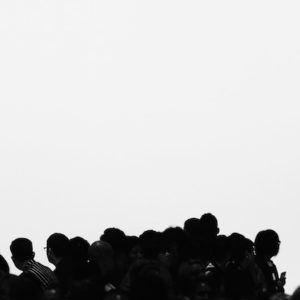 Why Is Caring About Fashion Considered Unserious?

Honoré de Balzac’s 1835 novel Old Goriot is the story of Eugène de Rastignac, a handsome boy from the south of France,...
© LitHub
Back to top
Loading Comments...