“Old as the Hills” 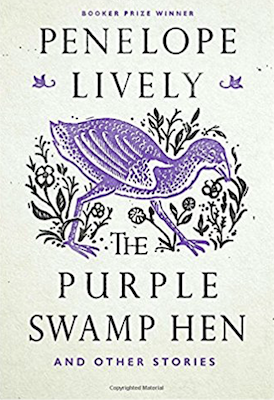 The following is from Penelope Lively’s collection of stories,The Purple Swamp Hen and Other Stories. From the low point of an artist couple’s European road trip to a a woman learning her husband is a serial con artist, this collection dives into stories of history, family, and relationships. Penelope Lively is an award-winning novelist and author of children’s literature. She received the Booker Prize for her novel Moon Tiger.

Here she is. Stick. Which I don’t need yet. That patrician way of surveying a room – she hasn’t seen me. I shan’t wave. Let her find me. She’s worn well – oh, yes. Apart from the stick. Doesn’t look eighty. Do I? She’s not done up, but understated stylish. Good coat, arresting scarf. Neat hair – all over silver grey, not pepper and salt like mine. No glasses – surely she used to? Oh, she’ll have had the cataract op.

You are in my head, Celia. Multiple versions. Multiple Celias. Is this one the first time I set eyes on you? If so – or if not – I still am. Still seeing you across a di.fferent room. Blue dress, summery blue, talking to . . . oh, I’ve no idea who. Laughing. And then you look over towards us, you smile. At Hugh, I later realize. Much later. And you wander over to us, still smiling, and it seems that you and Hugh have met before. ‘Celia,’ he says to me. ‘Celia Binns.’ A name I’ll get to know. The blue dress has a crisp white collar, a nipped in waist. You are slim, at thirty–six.

Not now. She is a touch overweight, I’m glad to see. Snap.

Ah, she’s seen me. The stick raised a little, in recognition.

She approaches. Slow, with entitlement, forging through the tables. People looking up as she passes. She knocks someone’s jacket off the back of his chair; he leaps up – apologizing, by the look of it. Of course – not her fault.

And here she is.

‘I haven’t been to this place before.’ She is removing her coat; a waitress materializes at once, to take it, pull out her chair, flourish a napkin across her knees.

I say that I have been here once. It had seemed all right. She has settled in, is considering me. She is thinking that I look all of eighty, that I have jowls, pouchy eyes, that I ain’t what I used to be.

Or maybe she isn’t. She says, at once, ‘So you decided to miss the funeral. Delicacy?’

‘Norovirus,’ I say. Which is the truth. She can believe it, or not – her choice.

‘Ours all sat together. People thought that was so nice.’

‘Quite a line–up. The youngest ones behaved impeccably. My Sophie. And that small lad of yours.’ She picks up the menu. ‘I shall probably go for something salady. Not a great eater, these days.’

Grief? Or concern about obesity? Not that she is anywhere near obese. Just rather stout, like me.

We choose. We order. We refuse wine (did I see her hesitate for a moment?) and sip mineral water. I ask if she is going to stay in that house. That large, expensive house.

‘Of course. Why wouldn’t I? All our things . . . I’d hate to part with anything. And so many memories.’ A little sigh.

Indeed. We all have those.

‘Dear me,’ she says. ‘Long time since we saw each other, Jane.

I correct her. Another funeral, which I did attend.

‘Oh yes – his mother. I’d forgotten you came. Good of you, considering. I’m sure Hugh appreciated that.’

Oh, he did. If an air of deep embarrassment and confusion equals appreciation.

There he is, and why am I surprised that he is older, has some grey hair, a di.fferent face. Me too. And you, Celia, and you. Elegant in black, neither embarrassed nor confused. Running things. Meeting and greeting. Presiding over the funeral bakemeats.

You are sixty. As am I. Well into middle age, and you carry it o.ff well. As a successful gallery owner should. I am successful too, in my own sphere, but university administrator is less conspicuous.

You have forgotten, you say ( you say . . . ), but I have not. I am there still in some stratum of the mind, supported by my Maisie, my Ben, observing your Toby, screwing myself up for strained exchange with Hugh. Observing Hugh.

You stand in gracious conversation with some elderly relative and remain thus in my head, competing with this subsequent Celia, Celia now, Celia seated, eating salade niçoise.

‘Not before time, one felt,’ says Celia. ‘But perhaps you got on better with her than I did.’

I am noncommittal. Actually, I had problems too. Seems we have that in common.

‘Odd to think she wasn’t much older than we are now. But there it is. We’re as old as the hills, aren’t we?’ She grimaces.

Old as the hills. And young as all those other Janes and Celias that crowd the mind. And Hugh. And Hugh.

‘One never thought it would happen, old age,’ says Celia. She is tucking into the salade niçoise, I note. ‘Just something that happened to other people.’ She laughs. ‘You were more realistic, I imagine.’

‘I tend to be realistic,’ I say. ‘Something I’ve learned.’

She gives me a sharp look. Wonders if I am making a point.

‘One can only try to make the best of it, I suppose. The occasional treat. I’m going on a little cruise next month. Hugh and I had planned to do that at some point.’ She sighs again.

‘He was so stoical. Right to the end. I know you’d want to hear that.’

Would I? But impassive seems inappropriate here. I nod. ‘Treats,’ says Celia. ‘And physiotherapy. I have a wonderful physio. But maybe you’re in better nick than I am. I’ll have to have a hip done.’

I mention my torn shoulder tendon, to keep abreast of her. Celia says she believes the best shoulder man is at the Royal Free. A friend of hers went to him.

‘You know,’ she says, ‘I’d go back to the forties, if I could have my time again. Forget youth – nothing but Sturm und Drang. The forties were good. Fifties not at all bad, either.’

Celia at fifty. Yes, that memory slide comes up at once: Celia at my Ben’s wedding, her hat trouncing all other hats, being tactfully unobtrusive but nevertheless emphatically there, impossible to miss. Hugh and Celia. Celia and Hugh. I am used to that, by now, but forever not. It is always an a.ffront. So at my son’s wedding I am a.ffronted.

‘Eighties are an outrage,’ says Celia. ‘What have we done to deserve this?’

I do not care for this implied community. I say that as far as I am concerned we are rather lucky to be living where and when we do and thus to have got to be eighty at all.

I regret the word. Not quite what I meant. I say so. ‘Statistically lucky,’ I say.

She laughs. ‘Well, I don’t feel like a statistic either. Just myself in a condition that I never anticipated.’ She puts down her knife and fork; she has demolished the salade niçoise. ‘And usually the oldest person in the room. Though not right now – there’s a real old codger over there. Ninety if a day. Boring the socks off his granddaughter, by the look of it. That’s what one is afraid of. Boring the socks off. Are you bored, Jane?’ That smile. The Celia smile.

I am not bored, oh no. I do not return the smile (who could compete?), but ask after her grandchild (his grandchild) Sophie, who has had health problems. I am not, as it happens, particularly concerned about Sophie, but one should observe the proprieties.

Sophie is much better, it seems. ‘And, incidentally,’ says Celia. ‘I imagine you’ve had the lawyer’s letter. About the legacies. Same for all of them.’

I have. I say that my Ben will be glad of his – he is in his first job, lowpaid, and saving for a car.

‘Oh, that rings a bell. Being young and strapped for cash. I remember being twenty–one and lusting – lusting – after a dress I couldn’t possibly afford.’

No image surges forth. I did not know Celia at twenty–one. Nor did Hugh. She would hove upon the scene all in good time. Bad time, you could say.

The waitress is wondering if we would like desserts. Celia says she could manage something if I would join her. We opt for the lemon cheesecake.

I have been waiting for this. ‘Satisfaction,’ I say.

Celia considers me. ‘Handbags at dawn? Isn’t it a bit late for that?’

The pleasantries are done. This is more like it. ‘Why Hugh?’

‘Well,’ she says. ‘Why not Hugh? I was high and dry – my previous attachment had foundered. There had to be someone.’

‘Unfortunately. But not entirely unusual, Jane. And he could have resisted.’

‘And you thought – Jane will get over it, people do.’

She inclines her head: possible agreement. ‘You found your Chris before too long, after all.’

I am rather pleased to hear that. Affinity would not have done. But this is beside the point.

‘He has sciatica and a prostate problem,’ I say.

A moue of sympathy from Celia. She will not press the invitation.

Back to business. ‘No compunction at all?’

Celia reflects. ‘Well, not really, I’m afraid. After all, I was in love,’ she adds sweetly.

I say that I have always thought history to be of great relevance. ‘Oh, I can’t think like you,’ says Celia. ‘You’re so well educated.’ The waitress appears. Would we like coffee?

Celia would kill for a coffee, it seems. So would I, I find. After a moment, Celia says, ‘Am I supposed to say I’m sorry?’

I have considered this. ‘No, because you’re not, so it wouldn’t mean anything.’

I tell her that perhaps confrontation would be a better word. ‘It’s called the elephant in the room nowadays. What is never spoken of. Forty–two years ago you helped yourself to my husband.’

Celia gazes at me. ‘Absolutely. I can’t deny that. Not an unprecedented situation, but I can see you feel that is irrelevant.’ She wears a benign smile, but her eyes are steely. It is each for herself now.

And that is fine by me. This has been a long time coming.

Forty–two years. I have plenty to say.

We get down to it. At last.

Our coffee comes. The waitress hopes we have enjoyed our meal. The restaurant is emptying. People are getting up, putting coats on, passing our table with an indulgent glance and smile: two elderly friends lunching, having a chat about old times. Bless.

From The Purple Swamp Hen and Other Stories. Used with permission of Viking. Copyright © 2017 by Penelope Lively.

How to Write About Authoritarians Without Getting Arrested 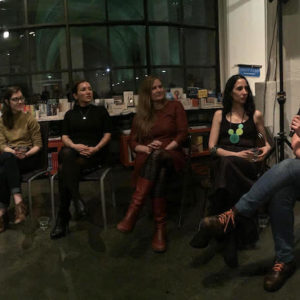 "Confessional Writing" Is a Tired Line of Sexist Horseshit, And Other Insights The following is an edited transcript from Red Ink's panel discussion on literary misfits. Red Ink is a quarterly series...
© LitHub
Back to top