If somebody asked you who is Orenthal James Simpson and why does he matter, where would you start? With the Heisman Trophy? With the Hertz commercials? Would you go back to the Watts Riots in 1965 or head straight into the courtroom for the jury’s verdict?

Another option would be the Palace Station, the Las Vegas hotel and casino where, in 2007, OJ and a group of wedding guests confronted a pair of memorabilia dealers believed to be selling a stash of Simpson family souvenirs. Guns were brandished, threats made. Oddly enough, this was the incident that finally caught up with Simpson and landed him in Lovelock Correction, a medium-security prison in northwest Nevada. That’s where he’s spent the last nine years, residing in a two-man cell and refereeing rec yard games in his spare time—by all accounts the model prisoner, which is why, last week, a parole board decided to send the Juice back into society.

It’s been just over 23 years since the deaths of Nicole Brown and Ron Goldman; a little under 22 since the jury found Simpson not guilty of their murders. In that time, nearly everyone involved and several who weren’t have had a chance to tell their version of the OJ story. Most recently, we’ve had Ryan Murphy’s pop-inflected FX mini-series, The People versus OJ, and Ezra Edelman’s Oscar-winning documentary OJ: Made in America, which together put the trial back in the public consciousness and reminded us just how complicated the issues and figures were. But before those TV events, there were books—many, many books. A formidable cottage industry grew out of the trial.

Faye Resnick was the first out of the gates with a dishy ‘diary’ about Nicole that hit stores shortly before the jury was sworn in. In the years following the verdict, there were book deals all around, with the attorneys—Johnnie Cochran, Robert Shapiro, Alan Dershowitz, and Christopher Darden, among others—competing for shelf space with jurors, media members, and even the trial’s black sheep, Mark Fuhrman. Jeffrey Toobin, the New Yorker writer who was first to report the defense team’s explosive accusations against the LAPD, has a strong claim to having penned the definitive portrait of the trial, though some readers (more all the time, it seems) find themselves drawn to Marcia Clark, the lead prosecutor who released her vitriolic and altogether convincing account of events in Without a Doubt and is lately enjoying a second act as a bestselling mystery novelist.

But by far the strangest book in the scrum is the orphaned volume, If I Did It. Some time around 2006, OJ sat down with Pablo Fenjves, a part-time ghostwriter who also happened to be one of Nicole’s neighbors called to testify during the 1995 trial. Based on those conversations, Fenjves wrote a tell-all from OJ’s perspective, set to run under OJ’s byline. The story is full of accusations and explanations for OJ and Nicole’s troubled relationship. And then, of course, there’s the chapter everyone was waiting for: “The Night in Question.” With a chilling disclaimer (“Now picture this—and keep in mind, this is hypothetical”), the book goes on to describe an encounter between OJ, Nicole, Goldman, whom OJ suspects of being a lover or possibly a drug connection, and a mystery man named Charlie who tries to calm things down but then hands a jealous, irate OJ a knife, after which time OJ blacks out and only remembers coming around to find Nicole and Goldman amid great pools of blood:

I had never seen so much blood in my life. It didn’t seem real, and none of it computed. What the fuck happened here? Who had done this? And why? And where the fuck was I when this shit went down? It was like part of my life was missing…

When If I Did It was first announced, in November 2006, the outcry was intense and, one might think, entirely predictable, but the book’s publisher, ReganBooks, a HarperCollins imprint, seemed to be caught off guard and eventually canceled the publication. Hundreds of thousands of finished books were reportedly destroyed.

Over the years, one or two advance copies of If I Did It made their way into the public realm, but by and large the book was a specter until 2007, when a Florida bankruptcy court granted rights in the text to Fred Goldman, Ron Goldman’s father, who had won a $33.5 million civil suit against Simpson and held a claim against his earnings, including book proceeds. The Goldman family decided to release the story under the new title If I Did It: Confessions of the Killer, with the word “If” obscured on the cover and, in case there was any lingering confusion as to where the rights holders’ stood, a new chapter titled “He Did It.” In the annals of American publishing, it’s one of the more ambivalent crime stories ever told and leaves the reader wondering, exactly what is OJ’s story? What does he really think of himself?

So far, OJ’s official story been reserved for sentencing judges and parole boards like the one convened last week in Nevada. During the trials, he mostly stayed mum, opting not to testify in either of the criminal cases. In the Goldmans’ civil suit, Simpson took the stand for four hours, but his testimony was largely a string of flat denials; the tight confines of a hostile witness examination rarely bring out a story’s nuances. Sentencing and parole hearings, on the other hand, offer more expansive forums. In 2008, following his Nevada conviction, Simpson spoke to a Clark County judge for five minutes, without interruption or prompting, about himself—about his summer jobs, his affection for Nevada, his resentment of the people who had tried to hustle and exploit him since his famous run-in with the law a decade earlier. And finally, he offered his version of what happened in Las Vegas the year before. It must have been something of a relief, hearing his own voice in open court. Simpson was poised and engaging throughout, right up to the moment the floor was turned over to the judge for her final decision: concurrent sentences running upward of 30 years.

It was a harsh result. Many believed Simpson was being punished for other crimes, ones he’d been acquitted of. The judge denied that the 1995 killings factored into her ruling, though in fact, thanks to a quirk in our sentencing system, she would have been perfectly justified in tacking several years onto Simpson’s prison term if she felt, all things considered, that probably he had murdered Brown and Goldman.

At Lovelock Correction, the reports on Simpson have been glowing. Jeffrey Felix, a Lovelock guard, now retired, said Simpson had “gotten in no trouble in nine years.” Felix, incidentally, is also the author of the 2016 book, Guarding the Juice, in which he describes himself as “a super secret OJ double agent” and tells his readers they have his blessing to go ahead and “jump first to the chapter dedicated to OJ’s penis.”

Thanks to his spotless disciplinary record and advanced age (70), Simpson was considered a strong candidate for a reduced term. In 2013, he won parole on five of twelve charges. Last week, he had a chance to address the other seven, the ones that were keeping him locked up. A parole hearing is a strangely intimate encounter. The formality of in-court examination is shed in favor of a back-and-forth discussion. Simpson was given ample space to talk about himself. “I’m pretty much a guy who’s always gotten along with everybody,” he told the four-person panel and 200-plus credentialed media members. “I basically have spent a conflict-free life. I’m not a guy who got into fights on the street…I’m not a guy who lived a criminal life, I’m a pretty straight shooter.” His delivery was pensive, less polished than in his TV and film days.

He also addressed the possibility that he might be overwhelmed by public attention upon release. In other words: would being OJ muck up his chances for rehabilitation? “Wherever I’ve been, there’s been a crowd,” Simpson said. “I’m pretty easily approachable. I’ve dealt with it all my life. I don’t foresee any problem dealing with the public now.”

The parole decision was unanimous—4-0 in favor of a release that may come as soon as October. According to The Hollywood Reporter, the networks are already lining up to compete for OJ’s first interview as a free man. At some point in the future, a book deal seems all but inevitable, particularly if Simpson ever manages to claw his way out of the debts he owes the Goldmans and others. For the time being, his plan, pending Nevada’s approval, is to move to Florida, where his children now live, and where residents enjoy robust protections against collection agents.

So, maybe that’s where his version of the story is destined to start: in Florida, an aging athlete looks back on a glorious youth, a misspent retirement, and the enemies who plague him still. Or maybe we already have Simpson’s version, enough of it for now anyway. A man can induce only so many confessions before they begin to lose their power. 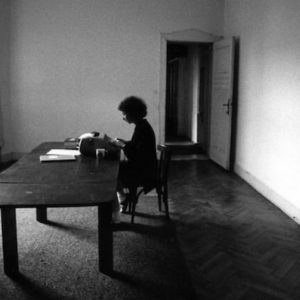 Those who know me personally often express alarm at the disconnect between my ominous writing and my sunny disposition. Some...
© LitHub
Back to top