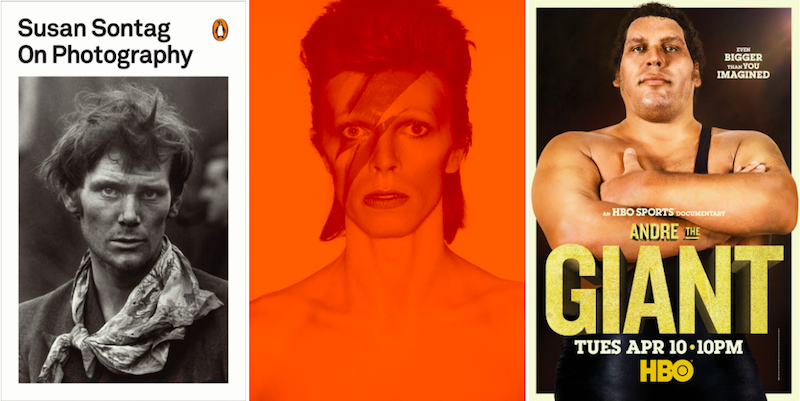 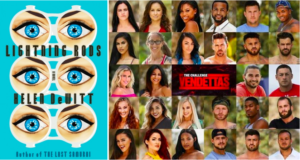 This week, in preparation for the release of her new story collection, I finally read Helen DeWitt’s Lightning Rods, which is just as hilarious as always advertised. I also went to a delightful event at McNally Jackson, during which two men with strange accents read to me from their new novels. One of them was Cynan Jones; the other was Lit Hub’s own Dan Sheehan, whose debut Restless Souls is also very funny—in a rather different way than the DeWitt. That is, more witty repartee, fewer naked butts being inserted through bathroom stall walls. I also had planned on watching the Challenge: Vendettas reunion episode this week (if only to find out for sure that Cara Maria—for whom I have been stanning for nearly a decade now—won the whole thing) but after discovering that MTV is not only holding winners until the reunion but actually dragging it out over two weeks, I will not be watching. Happily, I was able to confirm Cara’s win via Reddit, which apparently has spoilers for reality TV shows I thought no one except me ever watched. You live, you learn. 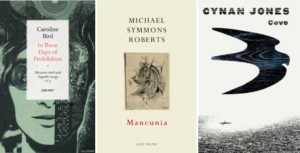 I planned to be diving in to Cynan Jones’ new novel, Cove, which I heard him read from the other night, but I finished it almost on the way home. It’s that short, so spare as to be a new kind of miniature novel. Strange and otherworldly. Instead, I’ll be checking out some poetry collections I picked up in England last week — Caroline Bird’s In These Days of Prohibition and Michael Symmons Roberts’ Mancunia. Two poets who couldn’t be more dissimilar. One with a new moonlit diorama of places real and otherwise, the other a stage-lit series of unpredictable digressions and confessions. It’s like going from a gothic to a comedy: two things I tend to need these days as a reader.

I finished Anne Garréta’s wonderful, weird, dagger sharp little book Not One Day, just in time to host the Albertine Prize Book Battle on Tuesday, which saw five writers drinking and arguing about which book should win the grand prize, the other shorlisters being Black Moses by Alain Mabanckou, Compass by Mathias Enard, Incest by Christine Angot, and The End of Eddy by Edouard Louis. They made me pose with boxing gloves and there were incest jokes so I don’t even know what to tell you except it was fun in the end. The next night was perhaps the best of the week (or month?) as our colleague Dan Sheehan celebrated the American release of his novel, Restless Souls: it was probably the warmest, loveliest New York book party I’ve been to in a long while. (I also watched the Toronto Maple Leafs lose to the evil Boston Bruins last night in the first round of the playoffs, which was not fun, but still important). 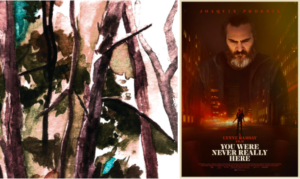 I’ve spent the majority of my commutes this week listening to Bark Your Head Off Dog, the new album by beloved Philly band Hop Along. Frontwoman Frances Quinlan, whose voice—soft and romantic in one moment, full-throated and gravelly the next—is considered by some to be “the best in rock music today,” is a genuine joy to listen to, even while severely undercaffeinated. I also haven’t been able to stop thinking about You Were Never Really Here, the latest offering from genially terrifying Scottish auteur Lynne Ramsay. Starring Joaquin Phoenix as a literally and psychologically scarred veteran and former FBI agent who now makes his living as a violent fixer-slash-hitman, the film—as many have pointed out—is not dissimilar from one of the blows Phoenix metes out with his hammer in an instantly iconic sequence filmed via CCTV. But its grim relentlessness is offset by moments of disquieting beauty: a close-up on tendrils of hair floating in a clear blue lake, or the unsecured corner of a garbage bag rustling in the breeze of an open car window.

This week was all about documentaries for me. I started it by binge-watching the entirety of Wild Wild Country—Netflix’s bizarre six-part series about the how a controversial Indian guru, his charismatic and ruthless personal assistant, and their band of possibly benign, possibly nefarious followers set up shop in a rural Oregon community at the beginning of the 1980s. Staying with the 80s, I then checked out Magic & Bird: A Courtship of Rivals (“courtship,” get it?)—the HBO Sports doc about a legendary rivalry, and eventual friendship, that arose between the gregarious Magic Johnson of the Showtime Lakers, and the pugnacious and taciturn Larry Bird of the Boston Celtics. Finally, because sleep is for the weak, I spent Tuesday night between the hours of midnight and 2 watching another HBO Sports doc—the interesting but ultimately pretty frustrating Andre the Giant, which spends a lot of time talking about the man’s incredible bulk and letting Vince McMahon and Hulk Hogan extol the virtues (while giving scant mention to the darker aspects) of the then-burgeoning WWF, but glosses over many of Andre’s personal relationships and doesn’t adequately probe the circumstances around his death. The filmmakers also completely leave out that delightful anecdote about Samuel Beckett driving a teenage Andre to school while they were neighbors in rural France, which seems an unforgiveable omission to me. 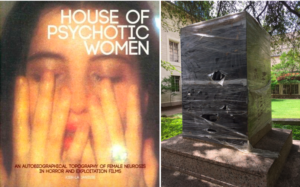 I spent part of this week traveling to sunny Austin and visiting friends, family, and my favorite bodega owners (Sunrise Mini Mart, you’ll always be my favorite!). Of course I had to stop by my favorite bookstore (and former workplace) BookPeople, and while I was there I remembered to pick up a book I’ve been wanting to read for some time – House of Psychotic Women: An Autobiographical Topography of Female Neurosis in Horror and Exploitation Films, by Kier-La Janisse, a work that aims to break down the boundaries between viewer, critic, and creator by analyzing feminist horror films through the lens of personal experience. I also wandered on to the UT campus to confirm with my own eyes that the Confederate statues that shamefully adorned the campus had finally been removed. The statues are gone, but the pedestals are still there, covered in plastic to hide their inscriptions. I tried to check out Austin’s new central library on my visit as well, but alas, parking was impossible to find. I’m sure the library is beautiful, but I can say with certainty that the library’s parking garage does NOT impress.

Last weekend, I set out to visit the “Being: New Photography 2018” exhibit at MoMA. Before going, Carmen Winant’s “My Birth” was the only piece I had read about—an installation of over 2,000 found images of women preparing for and giving birth. While Winant is directly addressing the fact that actual experience of birth is something people rarely want to talk about, I still didn’t expect the piece to be quite so shocking. Or rather, I didn’t expect to overhear so many people making notes of disgust and gagging sounds as we were funneled through the 20-foot hallway. How exciting! Aside from Winant, I was especially drawn to the disorienting and erotic photos of Paul Mpagi Sepuya and the eerie black and white portraits of Joanna Piotrowska. I’ve since been rereading Susan Sontag’s On Photography, bringing a deeper appreciation (and skepticism) to my museum visit. 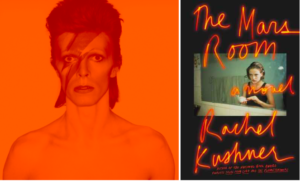 This week I’ve been reading The Mars Room by Rachel Kushner, out next month (yes, colleagues, it was I who took the office’s sole copy—not sorry). It’s a remarkably expansive, gorgeously written, novel—immediately more than a story about woman in prison, it’s also, equally, an exploration of class, punishment, and the prison system as a whole. And since this weekend I’m going to the David Bowie exhibit at the Brooklyn Museum, we’ve been playing “The Rise and Fall of Ziggy Stardust and the Spiders from Mars” all week, teaching the toddler to rock out to “Moonage Daydream” (which is freaking adorable). 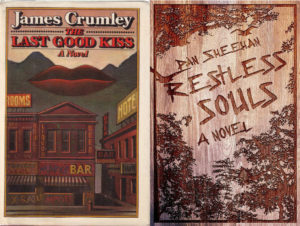 For no particular reason except that I needed a certain amount of my faith restored, I went back to re-read an old favorite this week, James Crumley’s The Last Good Kiss, and soon found myself returning to it nearly every night at the same hour, savoring especially and several times over the immortal opening line: “When I finally caught up with Abraham Trahearne, he was drinking beer with an alcoholic bulldog named Fireball Roberts in a ramshackle joint just outside of Sonoma, California, drinking the heart right out of a fine spring afternoon.” In the mood for road trips, I also read the debut novel of my esteemed and dishonorable colleague, Dan Sheehan, author of Restless Souls, which for my money more than lives up to Crumley’s example of intoxicated and romantic vagabondry, only with twenty-something Irishmen in the place of an occasionally employed private eye and a drunken poet/novelist. 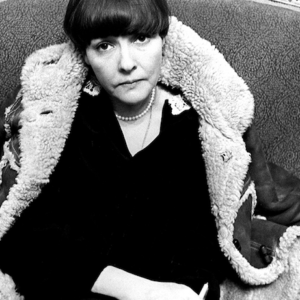