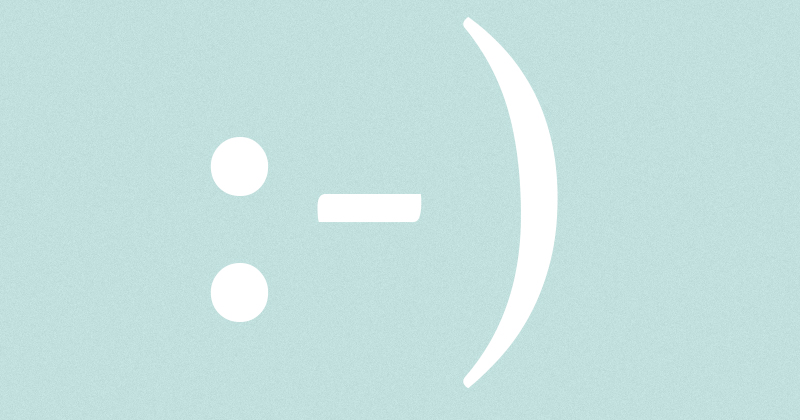 Of course Vladimir Nabokov imagined emoticons over a decade before they were invented.

The emoticon was invented on September 19, 1982, by Dr. Scott Fahlman, a professor of Computer Science at Carnegie Mellon University, in Pittsburgh. He and his colleagues were looking for a solution to misunderstandings of tone on an “electronic bulletin board.” Specifically, they needed a symbol to indicate that something was a joke. After considering %, *, #, and &, Fahlman had a notion. And thus, at 11:44 am on that fateful day in September, the smiley was born:

I propose that the following character sequence for joke markers:

Read it sideways. Actually, it is probably more economical to mark things that are NOT jokes, given current trends. For this, use:

This rather caught on.

But 13 years before this electronic bulletin board exchange, in 1969, Alden Whitman sent Vladimir Nabokov a few questions for a piece in The New York Times. (Did Nabokov ever use an electric bulletin board, I wonder? I can barely imagine him using an iron.) One of these questions was, shall we say, somewhat leading: How do you rank yourself among writers (living) and of the immediate past?

Nabokov’s response was sly: “I often think there should exist a special typographical sign for a smile—some sort of concave mark, a supine round bracket, which I would now like to trace in reply to your question.”

Why, I thought, reading this in Strong Opinions in 2021, how funny—now there is such a mark! Though Dr. Fahlman’s original smiley has by now been mostly eclipsed by the yellow graphic ones, and though Nabokov was not coarse enough to imagine that his sly supine smirk should have eyes (how barbaric) or a nose (puerile), I still find this to be a fun little historical jot. Or at least another supine mark in my personal ledger of reasons to love Nabokov.