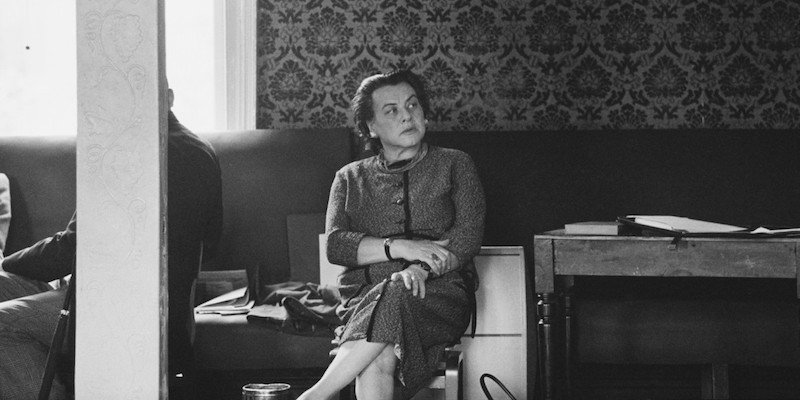 “O love tell the committee that I know.” A close reading of a Muriel Rukeyser poem.

If you sift through any writing on documentary poetics, you will absolutely find a mention (or more) of Muriel Rukeyser and her work in The Book of the Dead. Rukeyser wrote the book in response to the 1931 Hawk Nest Tunnel disaster in Gauley Bridge, West Virginia, where mostly Black miners contracted silicosis while working on the hydroelectric project in the tunnel—at least 764 of them died. If the company, Union Carbide and Carbon Corporation, had required wetting the sandstones while drilling or offered respirators to workers, many of those deaths could have been avoided.

Rukeyser’s poignant and investigative poetic sequences in the book have led many to consider her a forebearer of documentary poetics. As Philip Metres writes in his essay in The Kenyon Review, “one can draw a straight line between Rukeyser’s poem and practice and the work of C. D. Wright, Mark Nowak, Claudia Rankine, Martha Collins, Susan Tichy, Juliana Spahr, Bhanu Kapil, Erika Meitner, Minnie Bruce Pratt, Susan Briante, Tyehimba Jess, Solmaz Sharif, Layli Long Soldier, my own writing, and many others.” So in honor of what would have been her 108th birthday, I want to spend some time talking about a poem from The Book of the Dead, “Arthur Peyton.”

Arthur Peyton was one of workers at Gauley Bridge. The only information recorded by the company upon his death was that he was a white man; his age and place of burial are not known. “Arthur Peyton” works as a love poem, but it’s a love poem that is constantly interrupted with bureaucratic language and processes. Peyton is “consumed” and “eaten away” by the disaster, and though “love is across the street,” the Gauley Bridge Committee isn’t too far away either. And they offer (laughable in the face of such environmental and labor neglect) a “check…/payable to [Peyton] for $21.56.” A collation of various registers of language, from bureaucratic to testimonial, the book yields what Metres calls a “chorale effect,” in which “multiple voices and voicings…merge into a larger (but often dissonant) symphony.”

Rukeyser plays with this interruption to illuminate the discombobulating voices and forces that push up against one another. “After collecting all we could/ we find this balance due” is followed up a few lines later with a parallel “After collecting/ the dust    the failure    the engineering corps.” The former—the language of the committee—is probed and picked at in order to reveal the latter—the working realities and conditions that led to such disaster. And throughout, the lover becomes a sort of witness; he shares with the lover the dire conditions for the Black laborers at the tunnel, explaining “I saw [them] driven with pick handles/ on these other jobs I was not in tunnel work,” and he asks, “O love tell the committee that I know,” ultimately imparting onto the lover a role of the interlocutor.

As a witness/interlocutor, the lover also knows that there’s a doctor’s “verdict” to which Peyton pleads, “Dr. Harless, tell me how long?” In the face of such devastation, Rukeyser further interrupts the language: Peyton insists, “Only never again tell me you’ll marry me” and a few lines later, “I charge negligence, all companies concerned—/two years O love two years he said he gave.” It is in reckoning with corporate large-scale negligence, and the very palpable possibility of losing love, that the answer to Peyton’s question is made available. So if documentary poetics is, as Metres emphasizes, a “dissonant symphony,” then it is only through it that the sharp pieces of large-scale disaster—and the grief that follows—can be articulated.