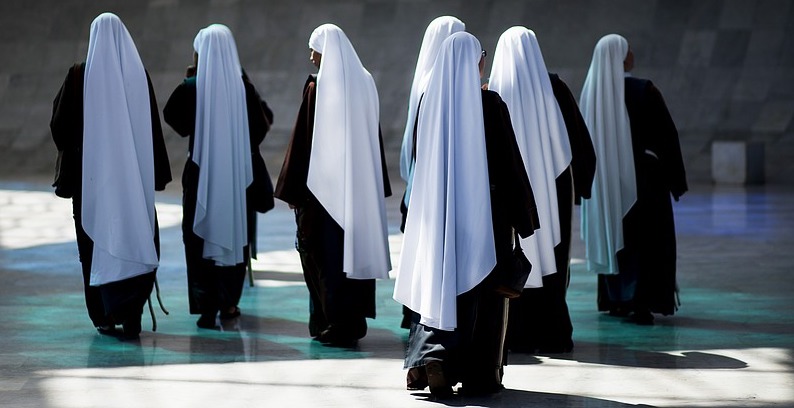 Alena Dillon Confronts the Stereotypes of Life in the Holy Orders

“When your book comes out, I’m going to give Father Tumino a copy so he can advertise it to the whole parish—get you some extra sales.”

This is my grandfather, a 91-year-old diabetic retired leprechaun with a suit in every color that he dons on a rotating schedule, using a color wheel pocket square folded to be wearable with each. He carries a fanny pack of coins with him so he can refill parking meters on Jamaica Avenue (a behavior I stole for my protagonist). He’s a walking (more like shuffling, these days) spoonful of sugar, and he’s talking about my book, Mercy House, a novel about a nun who is investigated for breaking doctrine by the very priest who assaulted her.

Mercy House isn’t exactly a call for readers to attend Sunday mass, so I have my doubts about what Father Tumino will make of it. I’m more concerned, though, with how my grandfather will receive it.

My grandfather has rooted for my writing for over a decade. He always asks what I’m working on, where I got the idea, how long my books are, and how I’m able to store over 300 pages on my computer. (He worked for the Bank of New York back when their computer system filled the basement. He doesn’t own a microwave, a smart phone, or even have the Internet, so 8GB of storage space is unfathomable.) He doesn’t remember if we are on the phone because of my birthday or his birthday (seriously), but he always remembers my book.

A 60-year member of St. Thomas the Apostle in Queens, he’s there multiple times a week as an usher—never mind that he’s a senior citizen who should be helped to his seat, not the other way around—and a money counter. He put four children through Catholic school, prays to the Blessed Mother, mounted a framed image of haloed Jesus in his living room, offers multiple masses a year in the name of my late grandmother, and is a contributor to just about every Catholic charity there is. They call and he hunts down his checkbook—they love him.

But the Catholic Church has become so infamous for its misconduct, even the most devout have to admit the harm it has perpetuated. The very same individuals who concealed the crimes of their holy men for decades also scrutinized religious sisters in 2010, sure they were guilty of a “feminist spirit” and a “secular mentality.” The culture of American nuns run the gamut from conservative (so cloistered they receive communion behind grilles and self-flagellate) to so progressive they refer to God as She. It’s this diversity (particularly the liberal end of the spectrum) that concerned the Vatican.

In a two-year investigation called the Apostolic Visitation, a representative of the Vatican probed and assessed every community of religious sisters in the country to assure they were keeping and promoting the doctrine of the church. It was unclear what disciplinary action would be taken if they discovered something unsanctioned. Ninety percent of nuns were over the age of fifty with no savings, personal belongings, health insurance, or home of their own. If excommunicated, they’d be destitute. (This happened to Sister Margaret McBride when she approved an abortion in her hospital to save the mother’s life. There was so much backlash following her removal, she was reinstated two years later.) So you can imagine the fear of religious sisters under examination.

Watching those religious sisters bop around the dance floor, I thought, Those are characters.

Worse than the investigation, though, were the widespread assaults that nuns endured. The full extent is unknown because it goes unreported—it’s part of a nun’s training to obey, and having their vow of chastity desecrated is considered dishonorable, made even more shameful when they are forced to have abortions by the priests who raped them. (Yes, this has happened. There is a report of 29 simultaneous pregnancies in one African congregation.)

It is this atmosphere of betrayal, uncertainty, and violence that backdrops my story.

The Apostolic Visitation was a mystery to me until I began working at St. Joseph’s College and my boss, a religious sister, and her fellow sisters would referenced the investigation, sometimes discussing it more furtively in small huddles.

These women were rock stars. They were fifty, sixty, seventy—EIGHTY—years old, hurrying down the halls of the college, juggling multiple positions, and then racing home after hours to their mission work at the motherhouse or local shelters.

My boss was the most generous supervisor I’d ever worked with: making peanut butter pie on our birthdays; scrapping together her monthly stipend to buy us Christmas gifts; thanking me for my good work on a daily basis, even when I spent the majority of my day scrolling through Facebook; and advocating for more hours and benefits for her employees although she wasn’t paid herself (and we spent most of the day on Facebook). That’s right: The Sisters of St. Joseph—professors, college presidents, provosts, and high-level administration—labored tirelessly, and weren’t paid. That’s devotion. And their male counterparts, who should have been their staunchest supporters, were questioning the very essence of their Catholic-ness—while at the same time protecting their child-abusing peers.

What was more surprising—and thrilling—than the religious sister’s commitment was their humanness. Outside of Sister Act, my perception of nuns had been sterilized. I assumed their piety was black and white—literally. I didn’t realize, while dedicating their entire lives to God and one another, they could also be sarcastic, competitive, or stow a stash of chocolate in their desk drawer. They even boogied to “It’s Raining Men” at a holiday party. Watching those religious sisters bop around the dance floor, I thought, Those are characters.

I shouldn’t have been surprised. Throughout my childhood, I spent three days a week at Trinity Episcopal Church, where one priest’s skin was leathery from sailing, another smacked our bums as he sent us into a youth group activity, and yet another had an affair with a married parishioner. (Robin Williams called Episcopalism “Catholic lite,” but I’m not sure there’s any sect lite enough to accommodate macking on thy congregant’s wife.) I wanted to become an Episcopal priest myself at one point, attracted to the field for its built-in salvation, free (and lavish) housing, as well as the opportunity to compose sermons every week, which I rehearsed on my way to the bus stop. (I have a crippling fear of public speaking, so my books will have to serve as my sermons, typed in the privacy of my home while wearing sweatpants.) The clergy were prudent but their flaws and individualism made them as three-dimensional as anybody else.

While many Catholic leaders represent the very worst in humanity, there are just as many—and I pray more—who embody the very best.

Maybe because of the drabness of the notorious habit, it never occurred to me that nuns could be as multifaceted. But as I researched for my book, I uncovered the nun who threw the perfect pitch at the Cardinals game, Sister Doris (a Bavarian brew master), and the Nuns on the Bus, who travel the country on a painted coach bus to promote their campaign for social justice—their 2018 tour was called, “On the Road to Mar-a-Lago.” I learned that many women entered the convent because, at the time, it offered one of the only options outside of the home; they were some of our country’s first feminists.

What began as an observation of my boss and coworkers was developed through research, creative exploration, and many, many, many drafts. Nine years after I first saw nuns dance (an image also included in my book, of course), the novel much anticipated by my grandfather is finally available for purchase and distribution to his (and your!) local priest.

Negative commentary against the Church is often received as a personal attack to the devout because, for many, Catholicism is as inherent to their identity as their own DNA; reciting the “Our Father” is an engrained impulse, a spiritual patellar reflex. It is especially offensive when a non-Catholic levels criticism.

I hope that my grandfather, Father Tumino, and the wider Catholic community will not interpret my book as a simple criticism of religion. While my story may include a call for change, it is also intended to be a celebration of faith, the pages teeming with awe and admiration for those who dedicate their lives to service—nuns and priests alike. Because, while many Catholic leaders represent the very worst in humanity, there are just as many—and I pray more—who embody the very best. 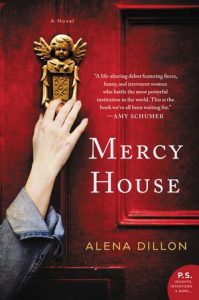 Alena Dillon is the author of Mercy House, a Library Journal Best Book of 2020, which has been optioned as a Paramount+ television series produced by Amy Schumer, The Happiest Girl in the World, and My Body Is A Big Fat Temple, a memoir of pregnancy and early parenting. 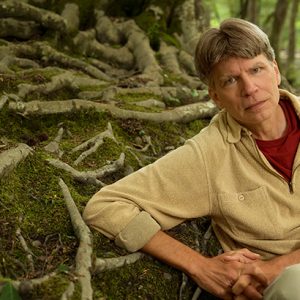