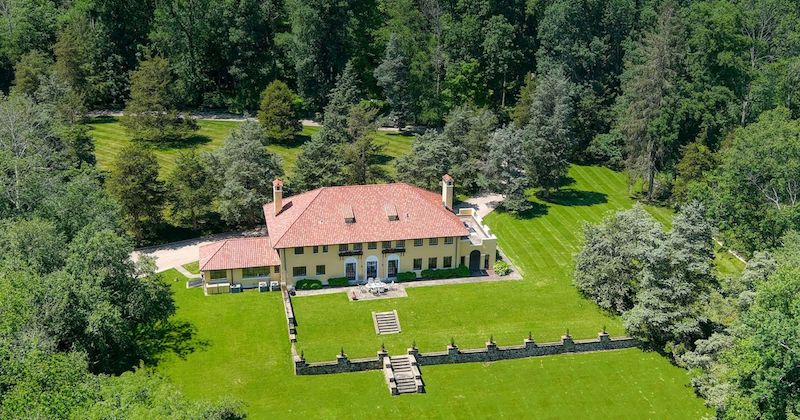 Now you can buy the glorious mansion where Mark Twain died.

Good news for Twainiacs (?) with money to spend: now, for $4.2 million, you can purchase Mark Twain (aka Samuel Clemens)’s bright yellow Redding, Connecticut mansion where he lived until his death in 1910.

Stormfield Mansion, named by Twain himself after his short story “Captain Stormfield’s Visit to Heaven,” was built in the style of a Tuscan villa at Twain’s specification; the 6300-square-foot mansion sits on more than 28 acres, and includes—as well as the five-bedroom main residence—a carriage house and guest cottage. Though Twain was barely involved in the design process, in a letter to Dorothy Quick, Twain revealed his happiness with the property:

I was never in this beautiful region until yesterday evening. Miss Lyon and the architect built and furnished the house without any help or advice from me, and the result is entirely to my satisfaction.

It is charmingly quiet here. The house stands alone, with nothing in sight but woodsy hills and rolling country.

And, in a New York Times interview, Twain called Stormfield “the most out of this world and peaceful and tranquil and in every way satisfactory home I have had experience of in my life.” (Except for the time Twain thought his friend was sending him a pet elephant as a present and panicked about elephant housing. But that’s an outlier.)

So, if you have $4.2 million on hand, and if you’re looking for a stylish, nature-surrounded home that is almost certainly haunted by the ghost of Mark Twain—or if you just want to recreate this iconic video—you may just want to consider purchasing yourself a Stormfield Mansion.