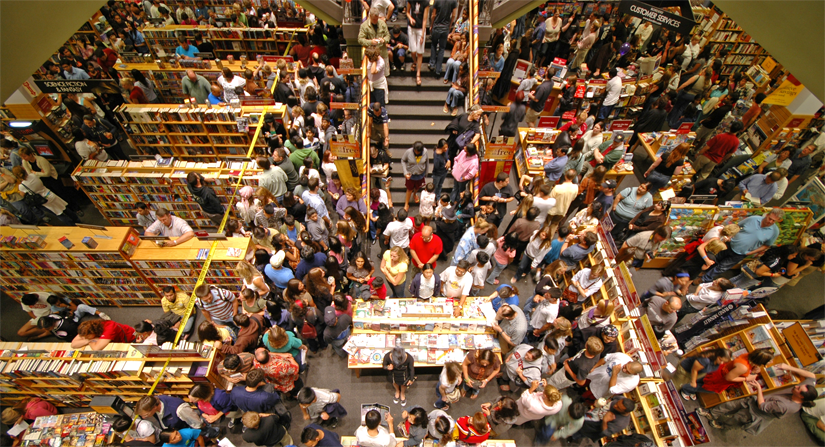 Notes From a Bookseller Under Pressure

There are many of us who hear/sing songs in our head appropriate to our stresses. For me, it is usually a Dylan song. Something depressing about how it’s not dark yet, but it’s getting there. A standard.

But for Thanksgiving Friday, Small Business Saturday and the weeks before the two holidays, it is Bowie and Queen all the way. Complete with walking around the store singing “ba de ba bop… PRESSURE, pushing down on me, pushing down on you no man (sic) asks for.” But quite possibly I am asking for it.

The dialectic: what to call those things we sell that aren’t books and… can there be a synthesis without feeling as if you’ve caved?

We are nearing the full-blown holiday rush and our shelves and counters are filling with… things. So, each year, I can’t help but ask: Is there a political point to be made for calling non-book related detritus, tchotchkes, sparkly twinkly things, sidelines instead of gifts, as many of my esteemed colleagues insist on calling all things?

Talking Leaves…Books has carried cards, calendars, blank books, and bookmarks since we opened in the 1970s. We didn’t identify them as anything, but realized these items were necessary to the conceptual idea that book buyers were readers and writers and needed these tools in order to pursue their craft, hobby, desire.

When did it all change? When did the ooze of stuff start appearing?

The so-called superstore was the catalyst that drove many of us indies to carry items that we wouldn’t otherwise have considered selling: purses, jewelry, scarves, intimate wear. But carry them we had to if we were going to stay in business. In our panic we forged this new place trying to become a one-stop shop. Indies had to incorporate “items” or lose out to the giants that had all one could wish for in thousands of square feet while not only being able to look at books and magazines, but simultaneously drinking a coffee while putting up a new blog post.

Unfortunately, many stores went too far with the elimination of books in the effort to accommodate the interloping non-book items. Identities were changed. Stores morphed into unrecognizable Woolworth-like places. Disfigurement reigned and we became stores that also carried books. (Yes, I am exaggerating. But those places are out of business so no one is being hurt.)

However, many of us believed that books were the why of our business. That by identifying those non-book related things as gifts we were elevating them to a consumerist stature they didn’t deserve. After all, a gift is something that is given away.

I place the blame for this schizophrenic moment in bookselling firmly on the capitalist agenda of bigger/more=better. We were scared and under siege and uncertain of the why beyond the obvious: they had and sold more stuff.

Would we be bystanders, plowed down by our customers fleeing, would we fight in any way possible or would we become the victims of maximalist corporate strategies?

Maybe it was because indies felt sidelined that some of us dropped the phrase when describing non-book items. Being sidelined directly speaks to involvement, belonging, and rightful location (or the lack of); it suggests you’re not good enough to start, or you are hobbled, or you are only sitting on the bench because you insist on being in the game even though your uniform doesn’t fit and has someone else’s name on it.

So, with a sense of camaraderie, I say let’s just call it the “fungible stuff” that let’s us carry lots of small press books. (Pressure, however, is not allayed, still have to sell, sell, sell.)

Customer service is what indies excel at and have to offer in particular ways that only a brick and mortar location and a person can give. We know this. We (I) know we (I) have to rein in the vitriol, keep our hands in our pockets instead of screaming at a customer, pointing at the door, and demanding they leave.

Customer service during the madness of the season is about focus, and maintaining equanimity in the face of staggering retail oblivion: “Sure, take as many pictures of our books as you want. I will happily pose for you holding the book, so that you can pretend to have bought it locally.” “Sure, you buy this from us, we’ll wrap it for free and you can return it after the holiday because you will have purchased it online by then.” “Thanks, and say hello to the grandkids, how old are they now?’ Yes, I am a bit curmudgeonly. Yes, maybe my office is really a cage. But don’t be fooled, I will do whatever it takes for the authentic customer. (Keats called this this kind of customer service—though he didn’t know he was speaking to consumerism—“Negative capability.” We indies are unrivaled in our performance.)

I am a lateralist—should there be such a thing. I refuse to recognize the restraints of hierarchy. Why can’t there be more than one first place? Home and bookstore?

For many who come through our doors—outpatients from the psych center a few blocks away, street folks, kids whose parents can’t afford daily afterschool care, we serve as a trusted environment. We are closer to a habitat than a bar or coffee shop.

Each of us is responsible for setting the limits of how non-book we are willing to go. For some, it will mean closing rather than compromising mission. For others, items that appeal to a wider audience will appear on shelves. Some will find a way to carry non-book items that are tangentially bookish, and elect to serve our mission through community activism. For the past 21 years Talking Leaves…Books has collected coats—Project Coat Tree. We collect outerwear for adults and children donating them to the smaller aid programs around the city. Since starting this program we have seen local news stations, supermarkets, etc. collect coats for kids. This is my favorite kind of customer service, the empowering kind. These coats are in fact, gifts from our customers who ask us for kindness and who in turn want to participate in and experience a moment larger than commerce. Customers start calling this “First Place” after the first snow, eager to help.

Ultimately, it all boils down to gesture and how expansive you feel while in these three zones of pressure. 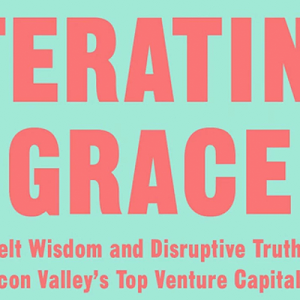 Every other week Oscar van Gelderen, the publisher at Lebowski in Holland, who blogs here, summarizes a notable work of (non)fiction...
© LitHub
Back to top