Every other week Oscar van Gelderen, the publisher at Lebowski in Holland, who blogs here, summarizes a notable work of (non)fiction in ten quotes, with an emphasis on style and voice. No spoilers. This week, the anonymously authored Iterating Grace, which first surfaced this summer as a limited-edition, hand-drawn book sent to a small number of tech writers and venture capitalists.

You don’t need to know my name. What’s important is that I recently got a phone call from a young man outside Florence named Luca Albanese. (That’s not his name, either.) Luca and I hadn’t communicated in ten or eleven years; he had lived with my family in Houston as an exchange student during high school. On the phone, he told me that he’d just finished veterinary school— a poignant swerve, it seemed, from his father’s expectation that he take over the family butcher shop—but it was immediately clear that he had no interest in small talk. He’d had an extraordinary experience, he said, and was in possession of “some unusual materials” that he thought I should see. (3)

Koons Crooks was an inexhaustible foot soldier of the first dot-com boom, working steadily as a programmer at a string of forgotten start-ups in the late nineties: Naka, InfoSmudge, BITKIT, Popcairn. He was tall and muscular, with a square jaw, an olive complexion, and thick, wavy hair just long enough to tie back in a ponytail—and yet, several friends told me, he still always managed to look distressingly unhealthy. (5)

In Silicon Valley, so many people had collaborated to create so much, only to watch it crumble and wonder how real it had ever been. For a lot of tech workers, this only led to despondency and debt. But Crooks seemed to find the dot-com economy’s impermanence electrifying. Start-ups, he realized, were a kind of spiritual exercise. (6/7)

Crooks’s life in the Bolivian highlands remains mostly inscrutable. It’s unclear when he began living on the volcano, or how often he came and went. (7)

Beyond food and camping gear, Crooks had very few personal items with him in the yurt: one change of clothes, a solar-powered laptop and satellite Wi-Fi hotspot that he seems to have built himself, an iPod shuffle with exactly one song (“Even Flow”), a photograph of Vannevar Bush, and a small, utterly inexplicable selection of hardback books: four volumes about deep-sea exploration (including one by a former roommate, James Nestor) and a copy of Chez Panisse Vegetables. (9)

Crooks himself never tweeted. He never retweeted. But he had developed his own impassioned way of favoriting. (13)

Maybe you’ve heard the gossip around the Valley and think you know how this story ends. (14)

Crooks’s relationship with the vicuñas started with a similar phenomenon, except that the animals were drawn in by the salt of his tears. (14)

Yes, there were many deep, hoof-sized contusions on the head, face, and chest; broken ribs and a fractured skull. (17)

Notes From a Bookseller Under Pressure 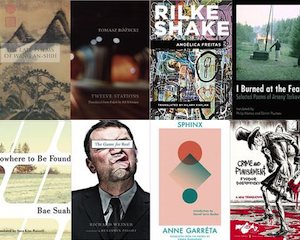 PEN Award for Poetry in Translation ($3,000): For a book-length translation of poetry into English published in 2015. JUDGE:...
© LitHub
Back to top