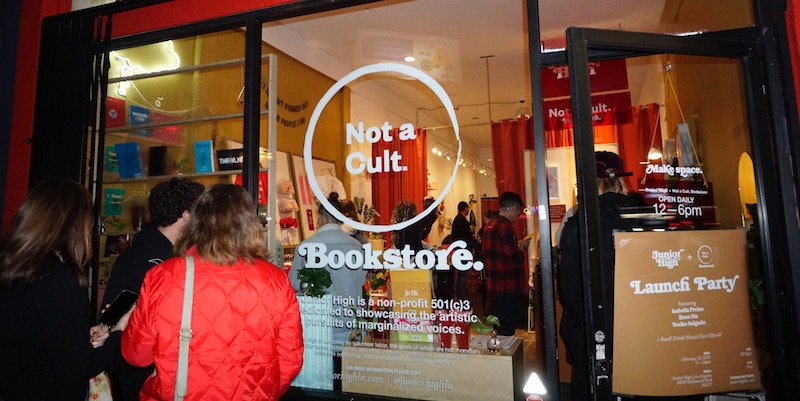 Not a Cult, a new bookstore in Los Angeles, puts authors of color at the forefront.

The door of Los Angeles’ newest bookstore is propped open on a quiet section of Hollywood Boulevard, the front window displaying books on a handmade wooden bookshelf. Inside the front room, you’ll find more books and merchandise below a neon light thought bubble and a sign that reads, “I still haven’t figured out all the people I am.” The staff is friendly, warm and eager to listen. In the back room, separated by curtains, art hangs on the yellow walls. The large space is waiting to be used by Not a Cult, an independent publisher turned bookstore.

Not a Cult is the brainchild of Daniel Lisi and artist hollis hart, developed as a way to produce work that helps build a more open-minded world. While Lisi was working on programming for Art Share LA, he encountered unpublished authors, including Los Angeles-based Salvadoran poet Yesika Salgado, who were over-filling the venues he booked. Bolstered by hart’s engagement in the artistic community and Lisi’s knowledge of publishing from his time at the independent publisher Write Bloody, Not a Cult launched in 2016. Their catalog features two dozen titles within the realms of fiction, non-fiction, poetry, art, and even spells.

In part because it’s such a small operation, their process with authors is very collaborative, according to Lisi. “A very consistent grievance I hear from writers is how there’s so little communication throughout the whole editorial process. That’s always been something we wanted to create and have that transparency so the artists can see the why. We give a lot of leeway to the authors to talk about the process from editorial to cover design,” he said.

Junior High became the brick-and-mortar location for Not a Cult’s bookstore and event programming through an introduction by Rhiannon McGavin, Not a Cult’s editorial proofer. The space, which is dedicated to showcasing the artistic pursuits of marginalized voices, exudes a relaxed vibe and welcoming atmosphere, almost like visiting an open art studio. 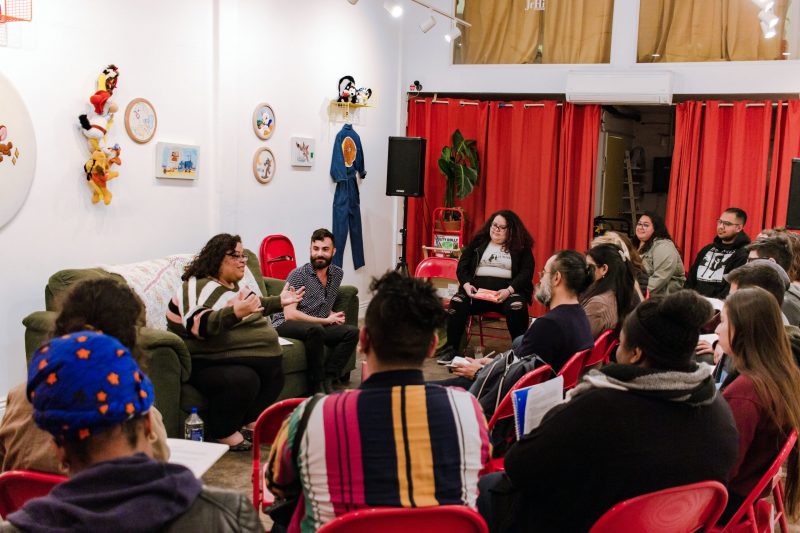 A group meets for Cuentos, a workshop on the making and publishing of a book, hosted at Not a Cult.

Not a Cult plans to host readings as well as workshops focused on building writing skills and understanding the publishing process. Beau Sia, a Tony-award winning slam poet with a forthcoming collection entitled Well Played, will be hosting two of these workshops. The first, Train for This, is a training workshop for artists looking to refine their public speaking. Participants will train in physical exercises that develop breathing technique, stability, and stress release as well as creative exercises to improve their tone. They will also run through scenarios to improve their ability to be on panels, give interviews, and conduct themselves at events.

Sia is also hosting a self protection class that is focused on developing skill, willpower, and awareness for marginalized people to more effectively address fear, violence, and permission.

Isabella Preisz self-published her first book, 7,300 days, which sold over 10,000 copies. Her debut poetry collection, hours inside out, is forthcoming this May from Not a Cult. “Having a communal space to share work, there is nothing that compares to that. I honestly would not be able to say this manuscript would exist without it, especially the themes that this collection touches on, they’re so sticky and tense that if I haven’t had the ability to air them out with people who see me, I don’t think I would have had the ability to get through it,” she said.

Yesika Salgado has published three books with Not a Cult: Hermosa, Corazón and Tesoro. “I’m someone that’s very guarded about working with white people or with institutions so it’s great to be a part of something like this where they get me and I can be fully transparent. We were flushing out the book tour for Hermosa and Daniel provided the names of two poets to be in conversation with me and I was like, ‘Look these people are legends but one’s a white woman I hardly know and the other is a man I don’t know, and I don’t want to sit with people just because their names are big. And he was like, I hear you. I receive you. Word.’ There wasn’t even a blip or anything,” she said. 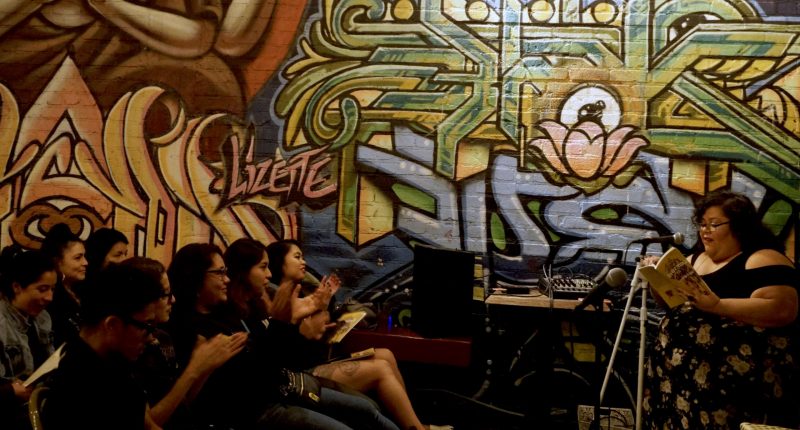 Yesika Salgado reads to an audience. Photo by Rhiannon McGavin.

Salgado is hosting one of Not a Cult’s more comprehensive projects, which launched with an orientation this week: Cuentos, a workshop that focuses on the making and publishing of a book. Participants learn the process of laying out a manuscript, reviewing, editing and the design process, with the aim of finishing a completed book by the end of it. (Participants who can’t pay a full rate can use Not a Cult’s sliding scale policy.)

Salgado offered her gratitude for Not a Cult. “I feel that there are a lot of Yesikas in a lot of cities all over the world and they won’t always get recognized. I don’t know what my career would look like if Not a Cult hadn’t come knocking on my door.”