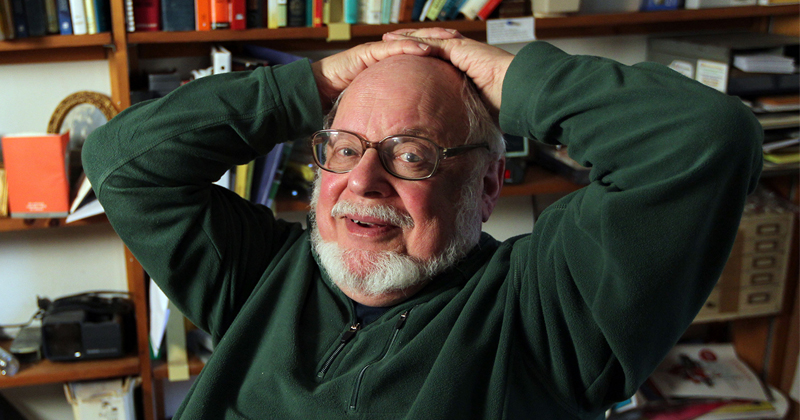 Norton Juster, author of The Phantom Tollbooth, has died at 91.

Norton Juster, the writer best known for his beloved, innovative children’s classic The Phantom Tollbooth, as well as The Dot and the Line, died last night at the age of 91.

Juster was also an architect, and he has said that The Phantom Tollbooth, which Maurice Sendak described as a masterpiece, first came to him while he was trying to avoid writing an entirely different book for children, about cities. “It was just something, really, to keep my mind away from the other thing,” he said in an interview. “And it was triggered, interestingly, by—I went out to dinner just before I went on this vacation and they were crowded, it was right in my neighborhood.

So I was sitting out in the lounge and about a ten year old boy walked out. I think he had finished his dinner and his parents probably said go bother someone else in the restaurant—not us. He came out, sat next to me and he looked at me and said, “What’s the biggest number there is?” So I said, “Well, what do you think?” And he reeled off a million, trillion, scavillion kind of a number and when he finished, I said, “Well, add one to that.”

And he looked at me and kind of —and then I made a number up for him and he very quickly understood and he said, “Well, add one to that.” And we talked for about 15 minutes, it was wonderful. It was two mathematical illiterates talking about infinity. And it really started me thinking about the things that always, not so much bugged me, that I didn’t understand. I understood them somewhat conceptually, but I didn’t understand why they were there at all, I mean why we had to concern ourselves with things like that.

And I was a great troublemaker in school for that reason. I always did—I did assignments, but I always did them in my way and kind of a different focus on them. And as I began working on this, I began to remember more and more about the problems I had as about a ten year old or an eleven year old and the thing just began to grow.

Writer and animator Mo Willems announced the sad news on Twitter this morning:

Best known for THE PHANTOM TOLLBOOTH + THE DOT & THE LINE, Norton’s greatest work was himself: a tapestry of delightful tales.

“To the vector goes the spoils.” pic.twitter.com/9PObTjRes7