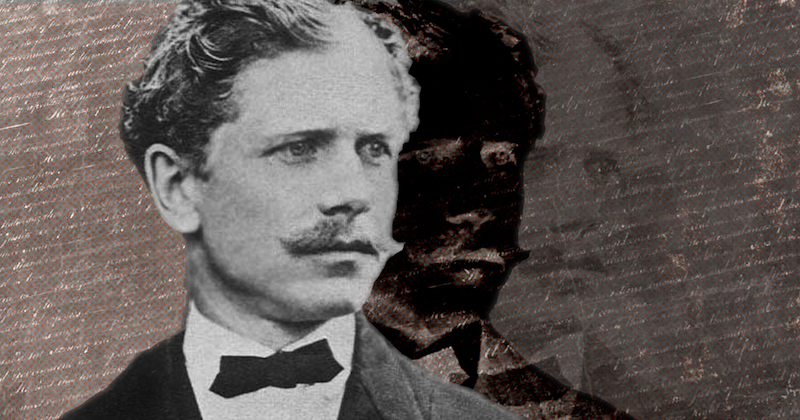 No one knows why Ambrose Bierce disappeared, but here are some theories.

Now (and with apologies to the scholars, superfans, and completists amongst you), chances are the only Bierce you’ve read is his much-anthologized 1890 short story “An Occurrence at Owl Creek Bridge.” The tale, about a man being prepared for execution by hanging from an Alabama railroad bridge during the American Civil War, is famous in American letters for being an early example of stream-of-consciousness narration and non-linear story structure, as well as for its gut-punch of a twist ending. Kurt Vonnegut called it the greatest American short story of all time (“I consider anybody a twerp who hasn’t read the greatest American short story, which is ‘[An] Occurrence at Owl Creek Bridge,’ by Ambrose Bierce…It is a flawless example of American genius, like ‘Sophisticated Lady’ by Duke Ellington or the Franklin stove.”) David Lynch, Tobias Wolff, David Benioff, Charlie Booker, and Terry Gilliam have all payed homage to it in their work. It’s even referenced in a Bon Jovi video.

Reading AOAOCB now, 130 years on from its initial publication, it’s still a marvelously unsettling story, but no more unsettling, I would argue, than the mysterious nature of its author’s disappearance.

In October 1913, a 71-year-old Bierce (by then considered to be one of the country’s most influential journalists) embarked on a tour of his old Civil War battlefields before making his way south and crossing in to Mexico (which was three years into a decade-long revolution at the time), where he joined joined Pancho Villa’s army as an observer. He witnessed the Battle of Tierra Blanca before accompanying Villa’s army as far as the city of Chihuahua. So far, so journalistic. Then he vanished without a trace, never to be seen or heard from again. Spooky, right?

So what happened to Ambrose? Well, to this day nobody knows for sure, but there are some interesting theories out there…

It had been a hard final decade or so for Bierce. Both of his sons, Day and Leigh, predeceased him (Day shot himself in 1889 after being rejected by the love of his life, and Leigh died of alcoholism-related pneumonia in 1901), as did his ex-wife, Mollie, who divorced him in 1904 and died in 1905. Bierce also suffered from lifelong asthma and complications from a Traumatic Brain Injury sustained in the war. At the end of all that, he was probably quite tired. Some believe that the whole “I’m headed to Mexico to cover the war” thing was just a ruse to throw people off the scent of his true intentions, and that, in reality, Bierce wandered into the Grand Canyon to end it all on his own terms. His last known communication with the world was a letter he wrote (and supposedly mailed from Chihuahua City) to a close friend named Blanche Partington. Dated December 26, 1913, it closes with these ominous words:

“As to me, I leave here tomorrow for an unknown destination.”

Theory #2:  He was executed by Pancho Villa’s firing squad

For many years James Lienert, a retired American priest serving in Mexico, doggedly pursued the theory (based on accounts he heard from elderly locals and their descendants in Sierra Mojada, Coahuila) that Bierce was executed on the orders of Pancho Villa and buried in the small desert town. Lienert even paid for for a gravestone to be installed in the Sierra Mojada cemetery, where he presumes Biece’s remains still lie. The gravestone reads:

If this really was the fate of poor Ambrose, at least he had been prepared for the grim eventuality. In a letter to his niece Lora, allegedly written shortly before he crossed over into Mexico, Bierce wrote: “Goodbye. If you hear of my being stood up against a Mexican stone wall and shot to rags please know that I think that a pretty good way to depart this life. It beats old age, disease, or falling down the cellar stairs. To be a gringo in Mexico—ah, that is euthanasia.”

Theory #3: He was killed by Mexican federal forces

An American soldier of fortune named Tex O’Reilly advanced the theory that Bierce was killed before ever even meeting Villa. O’Reilly maintained that Bierce was shot dead by Mexican federal fighters while drinking at a cantina in a mining camp called Sierra Mojada. They assumed he was a spy and since Bierce spoke no Spanish, he was unable to disabuse them of the notion before they dragged him to the cemetery, shot him, and buried him in an unmarked grave. O’Reilly wrote in his autobiography that, shortly after the shooting, he was taken to the house where the dead American had been staying, and had personally asked the owner if anything had been left behind. According to O’Reilly, “The old fellow reached up behind a rafter on the wall and brought out two old empty envelopes left by the Americano, and they were both addressed to Ambrose Bierce.”

Theory #4: He died of pneumonia on his way back to the U.S.

According to this 2019 article by Chris Opfer, there’s a chance that Bierce, AKA “Ambrosia,” is buried in a different unmarked grave in Marfa, Texas:

Journalist Jake Silverstein in 2002 explored the theory that Bierce bid adieu to the physical world in Texas, not Mexico. Silverstein dug up an old letter to the editor of a tiny local newspaper in Marfa, Texas, from a man who claimed Bierce’s body was buried there in an unmarked grave. That man told Silverstein that he had once picked up a hitchhiker who had fought for the Mexican federal forces as a teenager. The hitchhiker told the story of picking up an old gringo who appeared quite sick and called himself “Ambrosia.” He paid the man and his friends to help get him back into the U.S. and during the trip he talked of the many books he had written, one with with the word ‘devil’ in the title. But “Ambrosia” didn’t survive the trip back to the U.S., and instead died of pneumonia on January 17, 1914, his body buried in an unmarked grave in Marfa, Texas. It’s possible that the man who called himself “Ambrosia” was Ambrose Bierce.

The oldest person ever whose age has been independently verified is Jeanne Calment (1875–1997) of France, who lived to the age of 122 years, 164 days. If Bierce is still alive out there somewhere (perhaps hibernating in a cave in the Sonoran desert), he has beaten Jeanne’s record by almost 57 years.