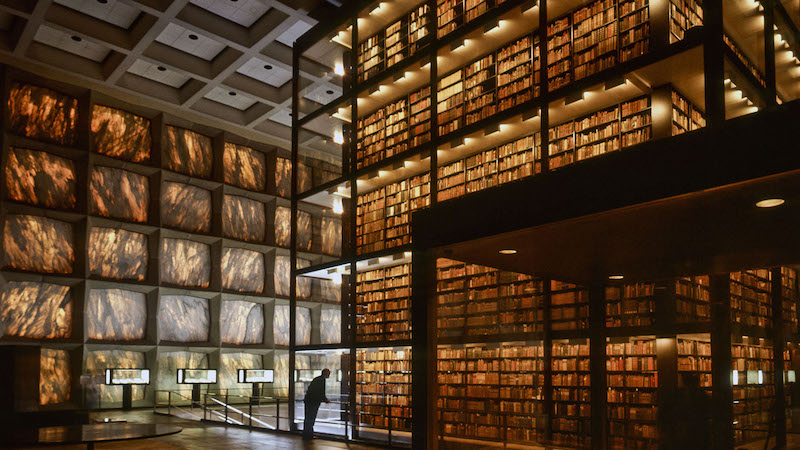 No, Beinecke Library is not specially designed to suffocate humans in the event of a fire.

For all the fake news fearmongering of the last four years, we’re still very susceptible to myths presented as fact when they’re deployed with authority. Last week saw the viral Facebook resurgence of a popular tweet from 2018 which claimed that in the event of a fire, all the oxygen is slurped out of Yale University’s Beinecke Rare Book and Manuscript Library to preserve the library’s collection of over one million rare books—killing all the people inside.

Fun fact about this library: if a fire starts in the library, all the oxygen leaves the building killing all who are inside in order to protect the rare books https://t.co/PF29UoalCE

Iterations of this tweet have gone viral because the idea of a killer library is compelling on its face; it’s crazy, and feels literary in and of itself. (Poe, get in there!) But it’s—sorry to burst your bubble—not true. Stephen Jones, Beinecke’s previous Head of Access Services, clarified the situation for the Yale Daily News in 2010: if a fire starts in the library, instead of a book-damaging sprinkler system, fire suppressant gases (a combination of halon and Inergen gases) would be released solely into the book stacks. These “clean agent” gases reduce oxygen levels through chemical reaction, stopping fire, but are still safe for humans to breathe. Said Jones, “[These gases] do lower the percentage of oxygen, but not enough to kill any librarians.” Beinecke Communications Director Michael Morand also confirmed the details of the clean agent fire suppression system this week for Reuters.

So, as often is the case, the real story is much less exciting than the distortion. But it’s not silly to have believed this: there’s some seriously bad design out there, and institutions are constantly deprioritizing human life. If anything, this debunking just shows there’s a niche waiting to be filled: nobody’s made the first extremely dangerous rare book library yet! If you want, it could be you—your first step is to assemble one million rare books.