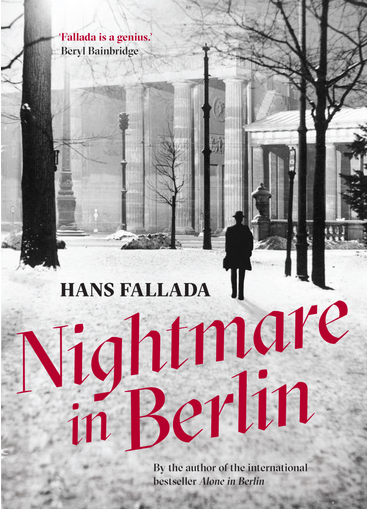 The following is from Hans Fallada’s novel, Nightmare in Berlin. Written with Fallada’s distinctive power and vividness, Nightmare in Berlin captures the demoralized and desperate atmosphere of post-war Germany. Hans Fallada was the pen name of German author Rudolf Ditzen, whose books were international bestsellers. He was cast into a Nazi insane asylum, where he secretly wrote The Drinker.

On 1 September of this pitiless year, 1945, Mr. and Mrs. Doll traveled to Berlin. They had lain in the local district hospital for nearly two months, and they were still far from well. But the worry that they might lose their apartment in Berlin altogether if they waited any longer had driven them from their hospital beds.

The train was supposed to leave at noon, but it had not been released until after dark; it was completely overcrowded, with its broken windows and dirty compartments. As they boarded the train and made a dash for the pitch-black compartments, all the passengers were in a foul mood, flying off the handle at the slightest provocation and viewing every rival for a seat as their personal enemy.

The Dolls had managed to bag two seats, where they sat squashed up by their seated neighbors and people standing in front of them. Boxes were shoved up against their legs, and rucksacks were dragged painfully across their faces. It was so dark that you couldn’t see a thing, but the hatred that everyone felt for everyone else seemed to manifest itself in the stench that hung about the compartment, despite the shattered windows. It smelled to high heaven in there, and it just got worse as more people boarded the train during the journey, squeezing into the already packed compartment and cursing anyone who already had a seat.

These later arrivals were mostly Berliners who had been foraging for mushrooms, who simply parked their baskets of mushrooms on the laps of the people in the seats, sullenly muttering something about taking them away later. But since the compartment was already overfull to start with, the baskets stayed where they were: Mrs. Doll had four on her lap; Doll had three.

But they made no protest, spoke not a word to their fellow passengers, and kept themselves to themselves. They still felt far too weak and ill to get involved in these sorts of arguments. It was only the thought of at least hanging on to their apartment that kept them going, and especially the husband: to him it seemed the last opportunity they had to begin a new life again.

Doll knew, of course, that he was clutching at straws with his hopes for the apartment, but he wanted to give fate this opportunity at least of saving them— as he sometimes said ironically to his wife, whose constant gallbladder attacks had made her quite despondent and easily influenced by her husband’s depressive moods. ‘We’re probably going to die soon anyway, but you can do it more discreetly and comfortably in the big city. They have gas, for one thing!’

If the others had too much luggage with them, perhaps the Dolls did not have quite enough. All they were carrying was a small weekend case, which contained a little bit of bread, a can of meat, and a quarter-pound of coffee beans wrapped in a twist of paper, plus two books and a few basic toiletries. Doll was wearing a lightweight summer suit, while Mrs. Doll had at least managed to borrow a pale summer coat from a friend before leaving. In his pocket, Doll had barely three hundred marks, which he had borrowed from an acquaintance; the only precious item they had with them was the young wife’s diamond ring.

The train halted for ages at every station, and when it was moving its progress was very slow. The Dolls could dimly see the fiery lines and dots shooting into the night sky from the chimney of the locomotive, which was burning brown coal. They had seen rather too much in the way of fireworks during the war to take any pleasure in the sight. The memories were still painful. But in the light of these dancing glow-worms, they could make out figures standing on the running boards, ducking down with their backs turned towards the dense shower of sparks. The contents of their rucksacks must have been very precious to justify burning and singeing their precious clothing, and hanging on precariously by one hand to the cold brass rail, at constant risk of falling off.

Most of the rucksacks probably held nothing more than a few potatoes, or a little bag of flour, or a few pounds of peas —enough food for a week, at most. But there they were, hanging on for dear life in the sparks and the cold, letting their clothes get singed with a kind of brutish resignation. They were doubtless all poor folk who used this mode of transport; there would be a wife and numerous children waiting somewhere for what these men were carrying. The black marketeers, who bartered items for more valuable commodities — butter, bacon, eggs — and who picked up potatoes and flour by the sackful, they didn’t risk their lives when they traveled; they recruited truck drivers in return for a share of the goods, and they didn’t have any starving children waiting at home … But who was a black marketeer and who wasn’t? When the Dolls

ate some of their bread and tinned meat in the total darkness of their compartment, some of the others smelled it through all the stench and began to pass pointed remarks about the sort of people who could still get hold of meat to eat. There was definitely something funny going on, and it needed to be looked into, in the cold light of day!

The Dolls said nothing, but quickly ate up what they had in their hands, and put the rest back in the little case before snuggling up more closely together. Mrs. Doll draped her thin, borrowed coat around them both, as the temperature was dropping fast. They put their arms around each other and held each other tightly. Doll rolled himself a cigarette from the last of his tobacco, and immediately someone piped up in a shrill voice: ‘That’s the third one he’s smoked! It’s like I always say: some people have it all, and the rest never get a thing, no matter what happens!’

The conversation ranged more widely over the racketeering and petty officialdom that were just a fact of life, and for the moment the Dolls were forgotten. They had a whispered conversation about their Berlin apartment; now that they were getting closer to their goal, and indeed had a goal to aim for again, the fact that they had heard nothing more about the apartment since March weighed heavily on their minds. There had been fierce fighting in the city since then, which had caused a whole lot more destruction, apparently—maybe their apartment didn’t even exist any more?

‘Wouldn’t that be just like it? All this travelling, half frozen to death, and when we get there, the apartment’s gone! I’d die laughing …!’

‘I have a feeling it’s all still there, just as we left it. And it won’t take much to get Petta’s room sorted out — there wasn’t a lot of damage.’

‘I can always count on you to look on the bright side!’

‘I’ve got lots of good friends in Berlin, you know! When my first husband was alive, we helped so many people — now they can do something for us in return! I’m pinning my hopes on Ben, in particular. Ben had an English mother, so he’s bound to be doing very well now. Ernst’ — the young woman’s first husband — ‘got him out of the concentration camp, so he’ll always owe me for that!’

‘Let’s hope so, Alma! Let’s hope for all kinds of good things—but not take anything for granted. The only thing we can be sure of is that we have each other, and that we will always be together! And that nothing can ever separate us. Nothing!’

‘That’s right!’ she said. Shivering, she snuggled up more closely to him. ‘It’s cold!’ she whispered.

‘Yes, it’s cold’, he agreed, and hugged her more tightly.

Berlin! Back in Berlin again, this beloved city where they had both grown up — he thirty years earlier than she, it’s true — this bustling, restless place glittering with lights! Seemingly caught up in an endless frenzy of pleasures and delights — but only if you ignored the grim, sprawling suburbs where the workers lived. Berlin, the city of work! They were going back there again to start a new life: if there was anywhere on earth where there was a chance for them to start again, it was right here in Berlin, a city reduced to rubble, burnt out and bled to death.

It was half-past two in the morning when the Dolls left the train at the Gesundbrunnen underground station, with the curfew still in place until six o’clock. An icy wind whistled through the station; every pane of glass seemed to be broken, so there was nowhere to shelter from the cold and the wind. They tried various places, but everywhere they were frozen to the bone. Even the little waiting room on the platform, which had somehow survived, was no warmer. The wind rushed in through the broken windows; people were sitting bunched up together on the floor, waiting disconsolately or grimly for the morning.

Mrs. Doll squeezed in between them, seeking shelter from the icy gusts. But scarcely had she stood her little suitcase on the ground and sat down on it before she had to get up again: she was told she was blocking the passageway! And this woman who always had an answer for everything, who was normally so breezy and spoiling for a fight, now sat down without a word at the outer edge of the clump of people. She pulled her thin coat more tightly around her, trying to shelter from the icy wind that now struck her with full force.

Doll scraped together the last few strands of tobacco in his pockets, rolled a droopy little cigarette with hands that were trembling from the cold, and ran up and down. He stood for a moment in the ruins of the former station building and looked out at the darkened city, over which a half-moon cast a pale light. All he could make out were ruins.

‘Don’t go outside!’ a voice warned him out of the darkness. ‘The curfew hasn’t ended yet. The patrols sometimes shoot without warning.’

‘Don’t worry, I’m not going out there!’ replied Doll, and flicked the butt of his very last cigarette into the rubble.

And he thought to himself: What a start! Things always turn out differently from what you expect. What you think is going to be hard is often easy, and something you don’t even think about turns out to be difficult. Standing here for two freezing hours in a completely bombed-out station, with nothing more to smoke—and Alma is ill! Her face looked so yellow…

He turned round and went back to her.

From Nightmare in Berlin Used with permission of Scribe Publications. Copyright © 2017 by Hans Fallada.

The Ugandan Reporter Shedding Light on the Lives of Missing Children 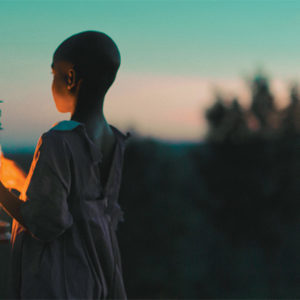 The Ugandan Reporter Shedding Light on the Lives of Missing Children “LOST AND ABANDONED” Many children get lost every day, while others are abandoned by their parents. Every Saturday,...
© LitHub
Back to top