VIA THE NEW BOOKS NETWORK

In Conversation with Annette Joseph-Gabriel

The 2018 reprint of Little Man, Little Man exemplifies communal and collaborative textual production. Published in 1976, the story was written by James Baldwin and illustrated by French artist Yoran Cazac. In this new edition, scholars Nicholas Boggs and Jennifer DeVere Brody write the introduction, while Baldwin’s nephew and niece, Tejan Karefa-Smart and Aisha Karefa-Smart write the foreword and afterword respectively. In Little Man, Little Man, which Baldwin alternately described as a children’s book for adults and an adults’ book for children, we see a slice of a Harlem neighborhood through the eyes of young TJ. The story presents a complex and multifaceted vision of black childhood in America and nudges the contemporary reader to think critically about what it means to see through the eyes of a child and to be seen by those in one’s world.

In this episode, Annette Joseph-Gabriel talks to Nicholas Boggs about the significance of republishing a children’s book by an iconic American writer.

From the episode
“I’m interested in what it means to have this book read aloud.”

Nicholas Boggs: One of the real exciting things about getting the book republished and out in the world is talking about it with people, but also hearing Aisha and Tejan read from it: it’s meant to be read live, it’s the black vernacular voice that was so important to Baldwin.

Annette Joseph-Gabriel: That reading [aloud] sounds amazing. I’m interested in what it means to have this book read aloud, to think about the aural landscape of the book, because music is really prominent throughout the text: we have lots of full-page illustrations of musical notes, we have Mr. Man who has this record player that’s playing all the time, and I’m wondering what you make of music specifically, and sound more generally, in this story, particularly given how you just shared your experience of how this text changes when it’s read aloud.

NB: That’s a great question. There’s a really great graduate student at the Schomburg event, and he had some really smart questions, especially about music and sound in the book. Because it begins—you’re absolutely right—the opening line goes all up and down the street and you see these musical notes floating in the air of the Harlem streetscape and throughout the book music is referenced in really interesting ways: Mr. Man as you said is playing the record player… There’s a point maybe about half way through the book where the children are listening to Nighttrain and doing their African strut and there’s an African scene sort of bursting out of their imagination, out the side of a building, and in boldface it says TJ “moving in a jungle where he can’t get no satisfaction,” so it’s also kind of referencing the Rolling Stones and the history of white appropriation of black cultural forms, so I think it does show a very complicated relationship to music.

Another thing this graduate student pointed out to me: he went and looked at the box, the Little Man, Little Man box in the Schomburg, and I believe in an earlier version it ends in a different way, it ends with Ray Charles: a song from Ray Charles specifically enables Miss Lee and Mr. Man and all the children to come out of the sadness and shock around the foot injury and construct a different kind of family, a  kinship among them that is enabled by Ray Charles.

Diana Hill talks to Stephan J. Guyenet, author of The Hungry Brain: Outsmarting the Instincts That Make Us Overeat (Flatiron, 2017)
*
Nathan Bierma talks to Tison Pugh, author of The Queer Fantasies of the American Family Sitcom (Rutgers UP, 2018)
*
Zeb Larson talks to Hannah Holleman, author of Dust Bowls of Empire: Imperialism, Environmental Politics, and the Injustice of ‘Green’ Capitalism

What Happened to Nicolás Maduro's "Socialism"? 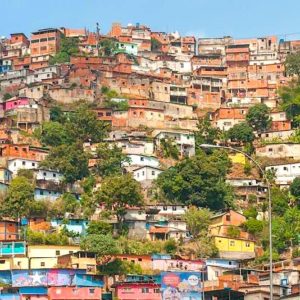 What Happened to Nicolás Maduro's "Socialism"?

May 19th, 2018– On the eve of the postponed presidential elections, Venezuela teeters on the brink of a crisis of gargantuan...
© LitHub
Back to top
Loading Comments...