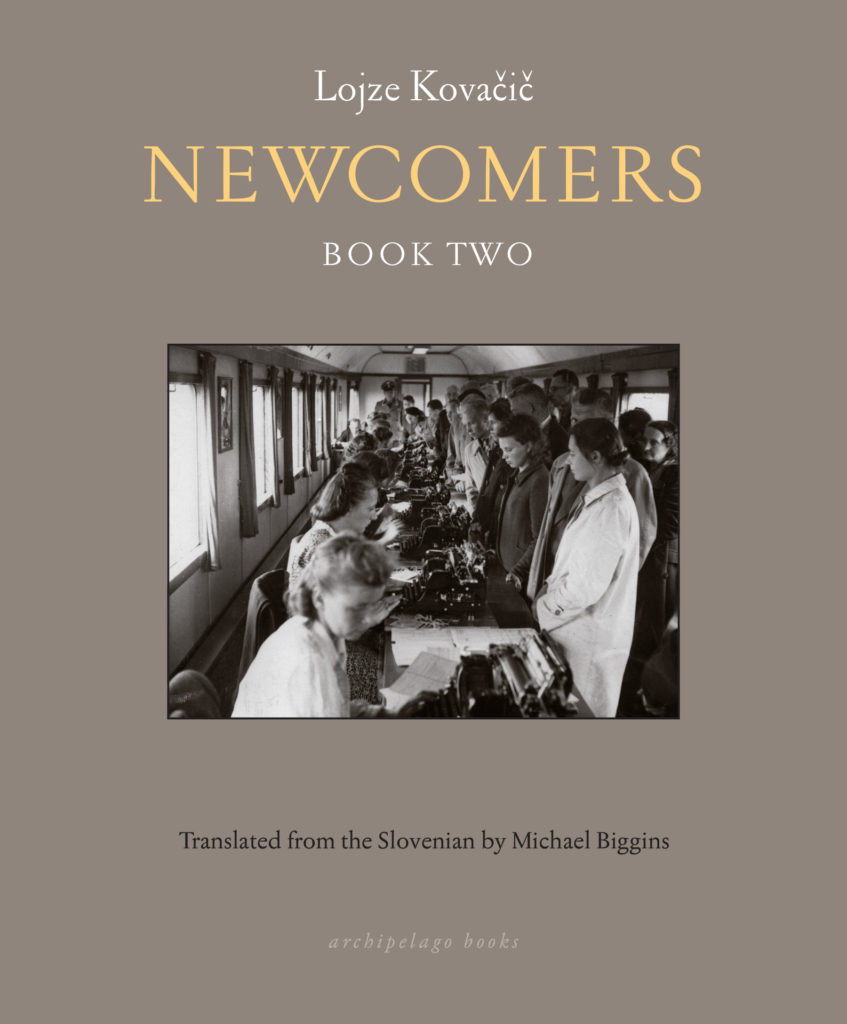 The following is an excerpt from Lojze Kovačič's Newcomers, the newly translated second part of the famous Slovenian writer’s autobiographical novel about the dangers and humiliations of his boyhood living in occupied Slovenia in the Second World War. It was translated from Slovenian by Michael Biggins.

The Italian soldiers would cook spaghetti and vegetable soup on mess vehicles that were parked in the courtyard of the casino. They doled some of it out to kids . . . Karel, Ivan, Andrej and I would run there with canisters . . . We would wait in the entryway next to the Rio Café until the soldiers in the courtyard had eaten their fill. Then the cook would call out that we could approach one of the kettles on the high flatbeds. The ladles they used were as big as helmets: our gallon containers had never held so much spaghetti and tomato sauce, or rice with big chunks of meat . . . Now, in addition to breakfast, at which we crumbled into our coffee white melba toast from the crates we’d brought home, we could also look forward to hearty and truly filling main meals at our table . . . Then the Ninth Army Corps of the Ljubljana Region issued a decree that by a certain date all inhabitants had to return any weapons, clothing or foodstuffs that they’d looted from the barracks of the former Yugoslav Army. Anyone failing to do so who was found to have such items in their possession after the two- week grace period had passed would be punished: 1; 2; 3 . . . Vati and I hid the crates as best we could, under some rags and old clothes . . . No, we weren’t going to give up that glorious toast at any cost, not even under threat of the death penalty . . . Sadly I was no longer able to take it with me onto the street because there were spies everywhere, and we couldn’t let anyone, not even the most innocent person, know that we had government-issued supplies at home.

At that time, they began using machines to cut down the gigantic bronze statue of King Aleksandar that was surrounded by a railing in the Star Park . . . It had been barely a few months since the formal unveiling, which the young King Petar II had attended wearing the uniform of an air force lieutenant . . . Before that, our whole school had gone to watch them use pulleys to hoist parts of the monument onto its high marble cube of a pedestal . . . an enormous boot in a stirrup . . . the muscular hindquarters of the horse . . . the king’s gloved hand holding the reins. . . half of his head with a pince-nez and that narrow hat. Now all of that bronze lay around in scales of varying sizes or dropped onto the sand . . .

I would go with Karel and Ivan to collect thorny-husked wild chestnuts off the roofs of the butchers’ sheds, which were also about to be demolished. Beyond the barracks, the tall columns and the denticulated roof of the new market were already going up, reaching from the Dragon Bridge to the Triple Bridge . . . From the river, its facade looked like a synagogue . . . The plans for it were by the same white-bearded, little man who had designed the chapels and a temple in the grove of the dead at Žale Cemetery . . . From the barracks to the fence posts of the new market, we could see Italian soldiers in the company of young women. There were market vendors, housemaids, salesgirls, all sorts of them . . . We crept to the edge of the flat roof in order to see . . . They would be hugging and kissing. Some of the girls would be pressing those dark, wavy haircuts to their breasts, while others would be trying to fend them off, so that the soldiers had to pick up the girls’ arms and put them around their necks . . . I felt sorry for the poor girls, but not all of them were equally deserving of pity . . . Once we caught one sitting on the seat of a bicycle that was leaning against a fence, with an Italian soldier standing on a block of wood in front of her . . . Ivan practically burst out laughing. Karel and I had to stifle him with our hands. . . The girl on the bicycle was still pretty young, blonde, wearing a blue apron – she was probably from one of the fruit vending stands in the market…She had her legs lifted up. She had thighs like some statue, like columns, hair on her ass and fur up front all the way to her navel . . . The fur opened up. . . like a mailman’s pouch . . . Ivan couldn’t stifle his laughter. Idiot! The Italian glanced up . . . He had his trousers bunched at his feet like a basket . . . “Avanti!” he roared . . . and he grabbed onto his red grenade . . . We jumped to our feet and ran over the rooftops until we reached the Dragon Bridge . . . Somebody whistled to us. It was some other soldier who was walking between the sheds and signaling something to us . . . “Hey!” he shouted. He pointed to a barrack and made that gesture . . . Poking the index finger of his right hand into the gap formed by the thumb and index finger of his left . . . That meant fucking. Gestures like that didn’t suit grown-ups at all. He pointed toward the barrack again, and we nodded. He turned around, took one step, and then, as if suddenly realizing something, turned back around. “Arrividerci!” we waved at him . . . Although these weren’t real soldiers in any sense of the word . . . more like pranksters in their baggy, comedic uniforms. . . you still had to take them seriously, if only on account of the grenades they carried and their hot temper, much less so because of the carbines, which were more suited to cavalry than foot soldiers.

Did they or didn’t they know about the mysterious things that the soldiers and girls were secretly doing in the balconies and on the stage behind the screen?

Behind every bush on Golovec Hill, beneath the parapets of the castle, in all the entryways, someone was making out with somebody. The Unity Cinema showed movies from ten in the morning till eight at night . . . two at a time, lasting four hours . . . If you got there halfway through the first one, you could watch it to the end, then see the second film straight through, and finally the first half of the other . . . and then you could go. The Italians sat in the crowded theater with whole bevies of women. They hugged and made out . . . various voices, smacking sounds, the rustle and zip of clothes emanated from the shadowy groping couples while the movie was showing . . . In some of the second-tier boxes, which were always the first to sell out, not a single head showed over the railing. That’s where the NCOs were rumored to make love to women right on the seats . . . Somewhere toward the middle of the first or second film, when none of those ticket-taking men in their blue uniforms with the silver trim were left standing by the velvet cord in the lobby . . . just the cashier, who was knitting in her ticket booth . . . we hurried out and crept up the stairs to the balcony level. We opened the doors, then shut them again . . . We would be a bit tense, as though any instant we might witness a murder. Then we pulled the velvet curtain aside and looked . . . The gray glow from the screen and the red bulbs over the exits were the only illumination . . . Between the balcony railing and the wall of the theater there was one dark figure lying on top of another, all the way back. They were wheezing and sniffling, not at all like the actors up on the screen . . . Through the dark, somewhere in the middle, there was some fuss underway . . . When our eyes adjusted to the darkness, someone was standing on his knees on a seat, showing his luminous rear end, cleft down the middle . . . or he may just have been feeling sick. There was something in front of him . . . a heap of outer garments or actually a woman, on her back, naked? . . .“Maledetta puttana!” he said . . . He shook the dark heap like a pear tree. It was a showdown . . . or maybe a murder . . . Amid all the commotion several of them went running out . . . If that wasn’t just a pile of coats on the seats . . . it was some poor woman . . . unless she hadn’t resisted or simply didn’t care, like Andrej’s Marjana back on Jail Street . . . We were as quiet as mice . . . We went back to the main level, as if we were going to watch the movie. We didn’t want to be present if someone was about to get killed or strangled . . . But from the auditorium there were other places we could go. Up steps that ran alongside the wall and through a door onto the stage . . . behind the big screen and the curtain . . . The images of the actors struck through the screen, and the subtitles ran backward, from right to left . . . It was such a dark, cavernous place that we felt like dwarves . . . There were chairs, tables and pictures in big frames leaned up against the walls . . . Occasionally we could make out couples there in the murk . . . one or more . . . They would be moving at the foot of the high curtains that covered the back wall . . . invisible hammers striking them from above . . . We kept together, as if the three of us were a couple . . . They panted and moaned and sometimes squealed, which you could hear through the words the actors spoke in the movie, through explosions from the guns of Navarone, through the music or birds twittering on mountain trails . . . We could also see them going out . . . two shadows, one after the other . . . together or separate again . . . Sometimes nobody was there. The floor was smooth and slippery . . . Little chocolate wrappers were strewn all around, little Camelia paper handtowels, balloons, white and soggy rubbers which, if you stepped on them, would squirt out that stuff that we men had in our scrotums and that babies came from . . . It smelled bafflingly like orangutans and fish. What was with that, why sardines and monkeys, of all things? . . . The floorboards were so slick with slime that you would slip on the little balloons . . . Behind the high curtain next to the wall, there was a door that led out to a courtyard . . . but there was no way out of the courtyard. You couldn’t climb over the tall iron fence on the left, where there were grave markers lying around on the other side, because the stone cutters would catch you . . . On the right, behind a wooden fence, was a printing shop and the Railwayman’s Gym, which had boxing rings and parallel bars in its courtyard. We had to go back into the auditorium and make sure that none of the uniformed ushers caught us . . . Did they or didn’t they know about the mysterious things that the soldiers and girls were secretly doing in the balconies and on the stage behind the screen?

From Newcomers by Lojze Kovačič. Translation copyright © 2020 by Michael Biggins. Reprinted with permission of Archipelago Books. 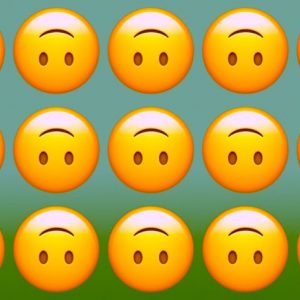 Why I Hide From Writerly Dread in the Pages of Self-Help There was a period of my life when, though I defined myself as a reader and a writer, the words I was consuming weren’t...
© LitHub
Back to top