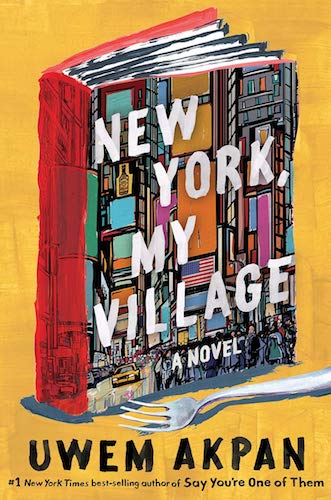 The following is excerpted from Uwem Akpan's novel, New York, My Village. Akpan's fiction and autobiographical pieces have appeared in The New Yorker, the Nigerian Guardian, O, The Oprah Magazine, and more. His collection of stories, Say You're One of Them, won the Commonwealth Writers' Prize (Africa Region), the PEN Open Book Prize, and the Hurston/Wright Legacy Award. He is from Ikot Akpan Eda in the Niger Delta in Nigeria and lives in Gainesville, Florida.

In early April, a day before my visa interview, I flew out of Akwa Ibom International across southern Nigeria to Lagos. That evening, in my pretty Yaba hotel, after a quiet meal of atama and garri, I unzipped my sky-​blue waterproof folder to ensure I had everything for the interview. Though the embassy website asked for only my passport, the invitation letter, and proofs of accommodation and financial resources, conventional wisdom said you could be asked any question by the consular officer. So I also had the originals of my birth certificate, baptismal card, certificate of origin, driver’s license, letters from the university, the National War Museum, and the Federal Ministry of Information and Culture vouching for the importance of my work in memory preservation, my expired marriage certificate, divorce certificate plus two police reports attesting I had been a victim of domestic violence, a clearance letter from the National Drug Law Enforcement Agency, a certificate of ownership of our new home in Ikot Ituno-​Ekanem plus its architectural design, a Certificate of Minor Chieftaincy Title from Afe Annang, transcripts from secondary school through my master’s program, three years’ worth of tax documents, membership cards of professional associations, etc.

Next, I stood up and walked around the room, rehearsing my answer to the most important question everyone said the consular officer would ask: What proof could I offer that I would return to Nigeria after my fellowship? Usen, whose wife, Ofonime, flunked four interviews before she could join him in the Bronx, had helped me build my answer around my coveted position at Mkpouto Books, my excitement over grooming local writers, the books I had published so far, and my ongoing war research by way of recording oral interviews of our Annang war victims, which had to be done in Annangland, not America. Molly also said I should add that her company was thinking of establishing a professional relationship with Mkpouto.

By the time I finally slept that night, my mind was already in New York. I scrambled up many times before the hotel service woke me at five a.m. I had no appetite, though they were already serving their complimentary breakfast at that hour.

Thirty minutes later, I was dutifully seated in a Benz Uber, eager to beat Lagos traffic for my eight a.m. appointment on Victoria Island. My folder lay beside me as I responded to all the text messages from Nigeria and abroad wishing me good luck as if I were going to court or taking a bar exam. I restricted myself to answering only texts from Caro, Molly, Usen, and Father Kiobel Baribor—​our beloved parish priest and friend—​because I was beginning to be restless; though my driver had said the traffic would be okay, it was dangerously building up. I called Caro to say how tense I was. She said it was unbearable for her. After she sobbed and said three Hail Marys slowly into the phone, which brought tears to my eyes, Usen sought to distract me by asking for pictures of “the poor man’s skyscrapers of Victoria Island”; I snapped and sent them to him. He asked to see how I was dressed; I took a selfie of my charcoal-​colored senator outfit and black shoes for him and Caro. He grumbled that I looked too glum; I said I was saving my smile for the embassy.

I got out near Walter Carrington Crescent, near the lagoon, which emptied a few streets away into the Atlantic Ocean. The heat of the dry season had woken up, too. It was going to be a hot, dusty day. The taxi berth was already like a mobile open market, as if nobody had slept the night before. There were all kinds of businesses: folks hawking stationery, groups running locker depots to house your phones and bags because you could not enter the embassy with them, photographers taking last-​minute passport photos, restaurateurs serving assorted Nigerian breakfast dishes as though it were a mini–​food carnival. The police here were more energetic than those at any country’s independence day celebrations. And there were too many folks in this neighborhood walking their huge muzzled dogs, as though to advertise a new fad, because I could not believe there were no smaller dogs in Victoria Island.

But, as I deposited my phone, what intrigued me the most was the number of touts trying to sell me colorful pamphlets on how to nail American visa interviews. I wore down the crowd haggling for my attention to two ladies who trailed me through the half-​mile-​high security no-​vehicular zone leading to the embassy.

“Uncle, do everyting to get the Latina visa interviewer!” counseled a lady in bright red culottes, carrying a huge bag of pamphlets on her head. “She dey merciful. We dey call am Santa Judessa. She dey wear blue-​rimmed glasses. She be our personal person for de embassy.”

“Avoid de white man, Lagoon Drinker,” her partner in an immaculate white dress said. “Dat one just dey drink water nonstop as if liquid no dey America. He dey bully our people too much, especially if you want visit New York, his village.”

“Please, just say you dey go New Jersey or Connecticut,” the other said.

“Uncle, dis Yankee embassy no get funny bone inside o,” the former warned me, sweeping her braids off her face. “Soon you go see how inside embassy be . . . ​meanwilee, make you give us tip na.”

“Then give us small change, little appreciation for decoding de color game for you!” the other one said impatiently. “Abi, we done give you valuable info to get visa to go make dollar nyafu nyafu for America!”

“Good, just buy our pamphlets, then,” the culottes lady said. “Uncle, we no be beggars. We no be touts. Just serious External Visa Processors, EVPs!”

I impatiently pushed past them, pointing to my folder to signal I had everything I needed. They apologized and went to find someone else.

By the time I arrived at the embassy, the angry sleepless gritty dust that filled the air had settled on me. And then I began to sweat. By ten a.m., after more than an hour at the processing line, I received my number and was among the first batch to enter the large interview hall. I took my seat and put my folder on my knees as the embassy apologized via a public-​address system that due to “technical difficulties the interview lines are going to be a bit slower than usual.” I clenched my jaw and went through all the documents again.

My neighbor, a beautiful and tastefully dressed woman in her thirties, shuddered. She brought out her tesbih, Muslim prayer beads, closed her eyes, and started to rub them between her fingers. She was naturally fair-​skinned, and her hands were covered with delicate black hennas designed like gloves. The other neighbor, an old man with a gold tooth, would not even answer my greeting, as though I were a bad omen. Yet he smiled often. He was in a black-​and-​white-​striped cotton dashiki and matching cap. People were already lining up to use the restrooms, others to drink from the water fountain. And there were those who were too cold because of the powerful air-​conditioning. When the old man complained, the guards said if he could not stand this little breeze, he should tell his interviewer he would not survive the American winter.

You did not push your luck with these folks, these our compatriots in sharp uniforms and boots. These guards moved about the packed hall like they ran America.

Excerpted from New York, My Village by Uwem Akpan. Copyright © 2021 by Uwem Akpan. All rights reserved. No part of this excerpt may be reproduced or reprinted without permission in writing from the publisher.

Emma Cline is launching a new imprint of highbrow "Picture Books" for Gagosian. 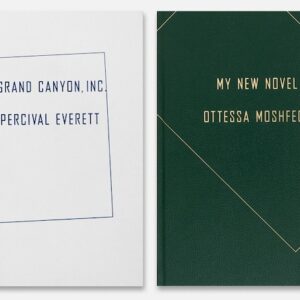