New Ways to Pay for More Poetry in the World

On Kickstarter's Summer of Poetry

Since 2009, over 500 poetry-related projects have gone from conception to reality thanks to crowdfunding website Kickstarter. This summer, Margot Atwell, Kickstarter’s Director of Publishing & Comics, hopes to increase that number significantly. On June 1, Atwell launched the site’s first-ever Summer of Poetry, a three-month drive using live readings, webinars, and in-person events to highlight the many poetry-themed projects searching for funders on the platform.

As a poetry lover herself (she studied at Smith with Eleanor Wilner and Henri Cole, among others), Atwell wants to bring back the appeal of poetry to those outside of academic settings. “Over time, poetry’s gotten a bit of a bad rap,” she says. “People think of it as a mystery that you have to parse; you need some sort of key to unlock it. I think that sometimes people who teach poetry at the very early stages of education, if they’re not extremely well versed in it, they might not have the tools to equip students with the insight that poetry is something you can appreciate like a dessert, or it’s something that can feed you and sustain your soul.”

Prior to starting at Kickstarter four years ago, Atwell spent seven years at the small independent press Beaufort Books. There, she experienced the challenges of funding literary projects first hand. “I have seen a lot of the challenges around money and publishing [as well as] audience-building for a specific title or project,” she says. “My work at Kickstarter lets me help publishers, authors and other folks in the literary community connect with an audience and raise funds for what they’re doing.”

As Director of Publishing, Atwell is tasked with overseeing all Kickstarter projects pertaining to publishing, comics, or journalism. “Anything that has to do with words on the site, it’s probably in my domain,” she says. A major part of her work is educating writers and publishers about the potentials of crowdfunding. “Independent publishers are doing some of the best and most interesting work in publishing, but there are a lot of resource challenges,” she says. “If Kickstarter is able to help with that, then I think it’s a really amazing place for me to be spending my time.”

Encouraged by how the internet and social media have galvanized new audiences for poets, Atwell began to see the potential Kickstarter had for doing the same. “It seemed like Kickstarter could be a really great place for people to connect with poetry—both people who read poetry and people who don’t even quite realize that they might enjoy poetry,” she says.

“There are so many great new books out there, and reprints, documentaries, and celebrations of poetry that might not be as supported in other ways these days.”

“In a lot of companies, if you said, ‘I want to spend the next six months focusing intensely on poetry,’ they’d be like, ‘I don’t see a business case for that.’ But Kickstarter, being a public benefit corporation, gives us a lot of flexibility to do things because it makes sense artistically… It’s one of the reasons I’ve stayed at Kickstarter for a pretty long time in tech world’s terms. There’s this enthusiasm for creativity in all stripes. It’s a pretty special place.”

There are several components to the Summer of Poetry, the first of which is bringing attention to poetry projects that are live on the site. Highlights include Copper Canyon’s publication of Ursula K. LeGuin’s final book of poems, or Tilted Axis Press’ Translating Feminisms, a set of chapbooks by female poets from Vietnam, Nepal, and India.

“The idea for our chapbook series came from a talk where a poet from the Kannada language in India spoke about how she was labeled a feminist in her home country and that label did and did not translate into other contexts,” says Esther Kim, marketing and publicity manager for Tilted Axis. “We wanted to listen to why and how feminism translates into each region and place, rather than impose some lazy, stereotypical ideas about them.”

Kim says Tilted Axis is proud to be a part of Kickstarter’s summer lineup. “Platforms like Kickstarter allow small, indie publishers like us to experiment with community-led forms of publishing and to secure funding for projects,” she says. “For readers, the summer’s a good season to slow down and invest in contemplative spaces for poetry, especially when there seems to be an onslaught of rapid takes (hot and cold) online. So, treat yourself and back a poetry project!”

A second component to the summer is helping poets connect with audiences. To do this, Atwell scheduled a series of readings via Kickstarter Live, Kickstarter’s in-house streaming service. Author and poet Fran Wilde, Kickstarter’s creator in residence, kicked off the series on Friday, June 15.

“It went really well!” says Wilde, who recently completed the new poetry collection Clock Star Rose Spine. “I was nervous, because I’m used to reading to people, and seeing their faces! But the comments and questions on the chat while I was reading, and hearing from people afterward how much they enjoyed different poems—that meant a lot.”

As a speculative fiction author and poet, Wilde says Kickstarter’s unique approach to publishing allows new forms of poetry to find backers. “The Summer of Poetry is a real celebration of how Kickstarter’s philosophy of supporting creative work impacts working poets,” she says. “There are so many great new books out there, and reprints, documentaries, and celebrations of poetry that might not be as supported in other ways these days. From small presses to big names, to authors just coming to (or back to) the craft, there’s a wide range of possibilities. Supporting them enriches the literature, and supporting poets on drip allows that to continue past a single project.”

Finally, there will be a live reading and reception at Kickstarter’s headquarters in Brooklyn on Tuesday, July 17 for people who wish to connect with fellow poet lovers in person. It will feature several poets, including Wilde, reading their poetry as well as a poem that inspired them. To attend, email poetry@kickstarter.com for an invitation.

Atwell’s goals for the summer are twofold: first, she wants to show publishers that what traditional wisdom says won’t sell is not necessarily true on Kickstarter. Anthologies, which are notoriously difficult to get published, is one category with the highest success rate on the site. This proves that there are audiences out there for books that might surprise the status quo. “By using different tools and being creative and innovative and taking some risks, people can do work that seemed impossible through more traditional channels,” Atwell says.

“The other thing I’m hoping to do is reintroduce poetry to people in a fun and vibrant and immediate way. Something that’s outside of an academic context, something that feels immediate, urgent, fun, and sustaining. And I hope that people might give [poetry] a second chance. If they think that they don’t love poetry, maybe they’ll come to realize that actually, they do.”

More than anything, Atwell wants people to recognize the power Kickstarter has for supporting creative people and their passions. “Our company’s literal mission is to help bring creative projects to life,” she says. “At a time when a lot of companies are not making decisions in favor of art, in favor of culture, in favor of creators being paid a living wage and a reasonable amount, Kickstarter really does stand in opposition to that. And we’re trying to create a world where people can write and do music and make art and get paid for it.”

You can see all of Kickstarter’s Summer of Poetry projects here, or consider launching your own. 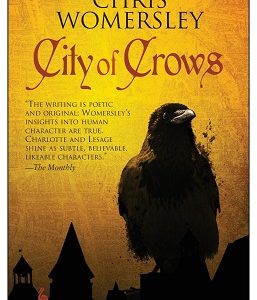 That night, when everyone was asleep, Charlotte could bear it no longer. She slipped from beneath her thin blanket and sat up for a moment...
© LitHub
Back to top