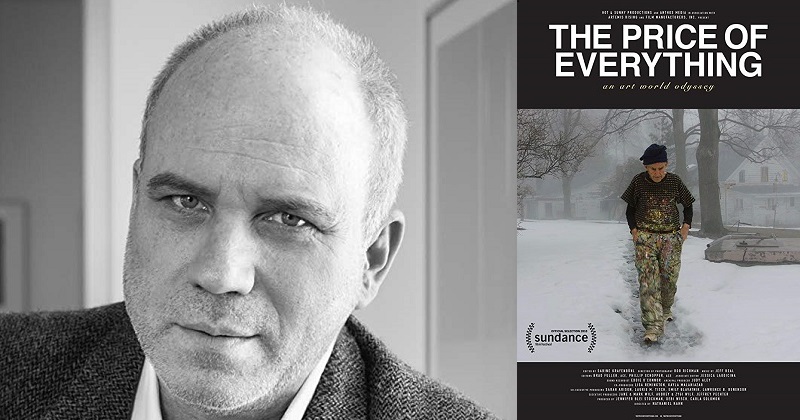 Nathaniel Kahn: “People Use Art Like the Stock Market.”

In this episode of A Phone Call With Paul, Paul Holdengraber speaks with Nathaniel Kahn about Larry Poons, playing dumb while interviewing documentary subjects, the relationship between capitalism and the art world, and where art’s true power and purpose lies.

Paul Holdengraber: Your new film, The Price of Everything, is in theaters now. Tell me more about that.

Nathaniel Kahn: The Price of Everything is about the art world, artists, the relationship between art and money and this crazy moment we’re living in, where everything is commodified. As art always does, it holds a mirror up to who we are and what’s really going on in our world. In certain parts of the upper echelons of the economic strata, people use art like the stock market. My impulse to make the movie came from being shocked by that situation and wanting to explore it. The fact that the movie’s in theaters makes all the difference, because it connects with people that way, and that’s the whole point.

PH: I’ve already seen the film three times, and can’t wait to see it in a theater! The latest revelation I had about it was that this is a documentary about devotion. Could you tell me what that word inspires in you when you think of the film?

NK: Wow, that’s wonderful to hear. I’ve never heard that before. I suppose all the characters in the film are devoted to art—whether they’re making art, buying art, or selling art, there’s an element of devotion to that. My heart lies with the artists, of course. I come from a family of artists and have seen the relationship between money and art since I was a kid. It’s a complicated one because of course artists need money to live and to explore what they want to explore, but at the same time, people become artists because they’re devoted to making something beyond themselves. They want to communicate something, and they have to be devoted to it or they couldn’t do it. Without devotion, the price, as it were, is too high. The thing about devotion, though, is that you can’t be devoted to something just for the sake of it. You also have to have joy in doing the work, and that was one of the things I wanted to represent in the film. I wanted to show artists working.

PH: You certainly do. One of the things I found magnificent about the film was the fact that, as you watch it, you can nearly smell and feel the paint.

NK: I was so lucky to work with Bob Richman, a cinematographer I love. He used a camera which was so colorful and vibrant and filmic, and really captured the feel of the paint and surfaces. I wanted to really be in there. People always said Van Gogh was right in there with the paint, even eating it at times, and that’s what I wanted to feel. It was amazing to be there with Larry Poons, one of the artists featured in the film.

PH: He’s a remarkable individual. Could you tell us more about him?

NK: Yes, of course. I didn’t know of him until I started looking for subjects for the film. He made very well-known paintings in the 60s and was represented by Leo Castelli, who at the time was the person to represent you as an artist—Castelli had represented Andy Warhol and other members of the Pop Art movement. And then Poons sort of—I wouldn’t say fell off, because other artists still knew of him. . .

PH: He fell off because he rebelled against something that someone had told him, right?

NK: Yes. When I met him, I didn’t know that. He was talking about the art market, and how there is no intuitive hookup between art and money. He talked about philosophies of art, and how if you’re an artist you kind of have no choice in the matter. It’s something you desperately want.

When we entered his studio and saw his new paintings, it felt like being in a magical kingdom of art. Here was this person who’d been outside of the mainstream for 30 years but was still reinventing himself and doing new work. And the courage it takes to do that when someone—art dealers, for instance—wants you to remain the same and produce more of the same work . . he said, “Larry Poons has moved on. In order to remain Larry Poons, I need to do this new thing.” Of course an artistic soul evolves, becomes better. We have to fly South with the birds. We have to find new places, new people to be around, new ways of being. It’s essential.

PH: Of course. What you’re saying reminds me of Rilke, of the “Archaic Torso of Apollo”, in which he writes, “You must change your life.” Which reminds me—you’ve shown the film a little bit now, in a variety of places. How have reactions been in different places?

NK: We opened the film at Sundance in January, and the reception has been unbelievably varied. As an artist, you seek a connection, a response, a resonance with your audience, whether it’s a conversation with a single other person, or a theater, a packed house. One place that knocked me out with its reception was Athens. Despite all that Greece has been through recently, young people put together this film festival for the love of it, not for money. The audience understood the film as an artistic experience instead of just intellectualizing it and analyzing it as an idea. In Athens, you’re constantly reminded of the presence of the past and the possibility of the future. Walking through the city at night, I saw amazing graffiti, protest art. It’s art that has something to say. It’s speaking directly to you, grabbing you by the shirt and saying “Who are you? What are you doing in the world? What is to be done?”

NK: Well, whether it’s protest art or sculptures from 450 BC, art is communicating with you. It grabs you and says, “This is the human experience.” Artists do what they do not because they’re being paid, but because it needs to be done right. This is a dark time in our world, honestly, and I feel this creeping anxiety and fear, but art gives you hope. You have to give yourself hope that things will turn out alright, and you also have to have the courage to change your life. 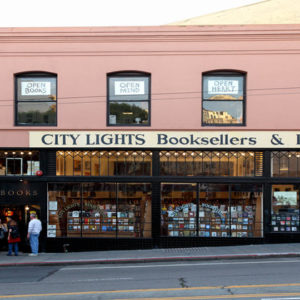 Elaine Katzenberger was working at Bar Vesuvio, before it became “historicized” and the muraled alley outside was renamed...
© LitHub
Back to top