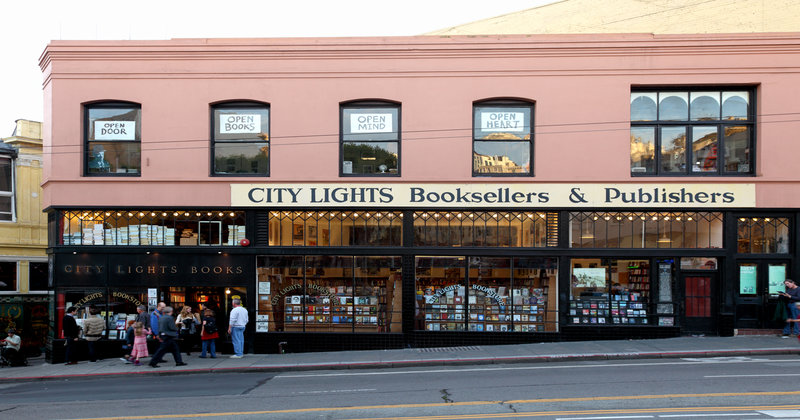 City Lights’ Elaine Katzenberger Has Seen It All in San Francisco

From Boom to Bust and Boom Again...

By Cary McClelland and Elaine Katzenberger

Elaine Katzenberger was working at Bar Vesuvio, before it became “historicized” and the muraled alley outside was renamed as a tribute to Kerouac. She worked there alone in the early mornings, and because there was almost no place else in North Beach open at that hour, she met the neighborhood: poets, old merchant seamen, flamenco dancers, alcoholics on their way to work downtown, taxi drivers having a drink after their shift, and regular folks looking for a good cup of coffee and a little bit of company in those hours before the local cafés opened. And one day a regular offered her a job at a little bookshop across the alley called City Lights. Founded in 1953 by Lawrence Ferlinghetti, a poet in his own right, the store had become a home to literary souls worldwide. Of her first day at work, she says, “It was like stepping into just the right temperature bath water. A stroke of lightning. It’s been thirty years.”

Today she runs City Lights and oversees its publishing wing, the imprint that first published Allen Ginsberg’s Howl & Other Poems. In the basement of the bookstore, there are shelves upon shelves of books on progressive politics, labor movements, world history, even a graphic-novel treatment of the Communist Manifesto. Above the main floor, up a set of stairs lined with photographs of poets and writers, is an odd-shaped room labeled poetry. Her office sits behind an unmarked door.

Back in 2013, when we were all being told that books were going to die out and all the bookstores were going to close, we had our 60th anniversary. We’d decided to make the celebration an open house, and the place was just roaring packed. I don’t know how many thousands of people came through here that day over the course of four or five hours. We had a few special readings and some party favors on offer, but really it was just about being here. It was amazing, very celebratory. Like you feel when you go to a protest and you’re surrounded by thousands of people and you think, Well, thank God. At least for today, right now, I can feel okay.

When Lawrence founded City Lights, San Francisco wasn’t the swinging, bohemian town it would become. That came later. In 1953, San Francisco was a conservative, rather buttoned-up place. And as he tells it, there was a real need for a space like City Lights. A place where the poets and writers could congregate and feel welcomed. The bookshop was meant to be a place for people to find each other, along with the books.

City Lights is based in a utopian vision of how creativity can be harnessed to make the world a better place, and to make our individual lives better and richer too. It was never thought of as a “business,” per se, and in fact, it’s always been actively anti-capitalist. The place has always just kept itself going, investing in the people who work here and in the projects we’ve created and supported over the years. It’s about empowerment through knowledge and creativity and about a strong commitment to free inquiry and free expression.

Both the press and the bookstore have always been engaged with the times. So during the 1950s, we published some of the very first books by poets who became the “Beat Generation.” During the 1960s and early 1970s, it was resistance to the Vietnam War, the environmental movement, experimenting with spiritual traditions—what’s thought of as hippie culture and ideals. In the Reagan years, there were the wars in Central America, anti-nuke movements, and Lawrence was traveling the world, attending poetry festivals and conferences, finding authors and connecting those literary and political dots. It’s been more than sixty years now, and inhabiting the line between being a historic institution and being very much a living, breathing participant in contemporary society, that’s the dance we do here.

And it seems to resonate. City Lights is full of people, always. And there are people all over the world for whom it’s important that City Lights continues to exist. They dream of coming here someday. How many places are like that? It’s not like this is Angkor Wat or something. I mean, it’s a bookstore. It’s uncanny and beautiful, and it’s being created each day by the people who work here, and by the people who come to the store and who read the books we publish.

Human beings are looking for collaboration—or commiseration—and stories. Even though the experience of writing a book or reading a book can be a very personal and solitary project, a book is a repository of our communal experience. So a bookstore is like a storehouse for our souls.

The story of San Francisco is that it’s a boomtown. And boomtowns are never particularly good places to live. Those of us who came here for an alternative to that, we’re in the minority now.

San Francisco was always—at least rhetorically, and sometimes in action—a kind of community unto itself. Maybe it still is. But if San Francisco no longer represents an idea of humanism and freedom from the treadmill, then where do we fit in? What’s our role?

The thing is, we are still here. And by working to keep this place strong amid everything else that’s going on—we’re reminding people that there is still another way to be.

I’ve had a recurring nightmare—where I’ll come walking down the street and it’s like Tokyo or Times Square. All the buildings are tall, there’s neon and huge video advertising everywhere. And it’s a terrible feeling: Oh my God, what has happened?

And then, finally, there’s City Lights. It’s still there. Just this little sweet building surrounded by all of it. And once I see it, I can breathe again. 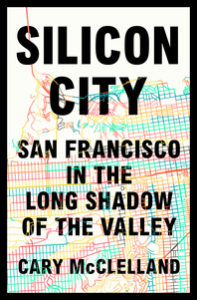 From Silicon City: San Francisco in the Long Shadow of the Valley. Used with the permission of W.W. Norton & Company. Copyright © 2018 by Cary McClelland.

Cary McClelland is a writer, filmmaker, lawyer, and rights advocate whose work has taken him around the world. He met his wife in San Francisco, where they settled down and built their first home. They now live in Brooklyn with their son.

Elaine Katzenberger is the publisher at City Lights Books.

Nathaniel Kahn: "People Use Art Like the Stock Market." 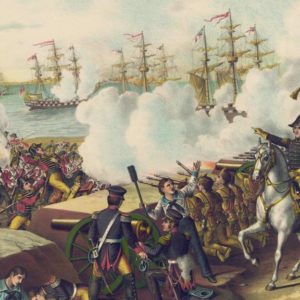 And so it had come to this. Horrified as he stood on a height above the Potomac, James Madison, the fourth President of the United...
© LitHub
Back to top
Loading Comments...