Nancy Pelosi on Looking to Eleanor Roosevelt for Hope

"We all could use Roosevelt’s wisdom, every day."

Eleanor Roosevelt didn’t look back, she looked forward. She was firmly critical of policy that didn’t work for people, but she didn’t complain about what she was against—she repeatedly asserted what she was for. That’s why we still look to her as a leader, a voice of reason and inspiration. It would be so nice to have her here now! Thankfully, we have her words. They guide our emerging leaders as convincingly as they have influenced previous generations around the world.

Eleanor Roosevelt was the longest serving First Lady in the history of the United States. After she left the White House, President Harry Truman called her the “First Lady of the World.” She brought remarkable gifts to public life, most importantly her conviction that politics begins
with beliefs. Doing what is right makes for a better public servant—and a better society.

Her own service was based on an ability to reach Americans. Her husband, President Franklin D. Roosevelt, took office in 1933, and early in his first presidential term, she was asked to write a newspaper column. She agreed. Thereafter, six days a week for almost thirty years, until her death in 1962, she wrote My Day.

She usually started with a quick story about someone she had talked to or something on her mind, but often she ended up giving profound advice. For instance: In December 1941, ten days after the Pearl Harbor bombing, she started by recommending a book she had just started about immigrants in America, saying that she hadn’t finished it, “so I can’t really discuss it.” But then closed her column with some clear advice: “If we cannot meet the challenges of fairness to our citizens of every nationality, of really believing in the Bill of Rights and making it a reality for all loyal American citizens, regardless of race, creed or color, then we shall have removed from the world the one real hope for the future on which all humanity must now rely.”

This was politics at its finest. Eleanor Roosevelt believed in true civic action. She insisted that all of us should stand up and be counted, even if standing up and speaking up requires more courage than we think we have. She believed in all people—women and men—and she believed that together we would make a better world.

I have always been taught that Eleanor Roosevelt gave voice to the aspirations of all Americans.

She knew that we could all learn. She took what she learned in Washington to help write a Declaration of Human Rights for the entire world.

In these troubled times, we all could use Eleanor Roosevelt’s wisdom, every day. I grew up in a family of Roosevelt Democrats. My father was a member of Congress who served most of the time that the Roosevelts were in the White House. So I have always been taught that Eleanor Roosevelt gave voice to the aspirations of all Americans. 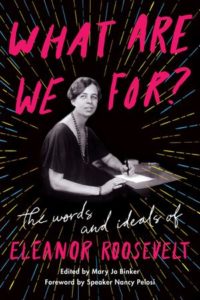 From What Are We For? Copyright © 2019 by Estate of Eleanor Roosevelt. Foreword Copyright © by Nancy Pelosi. Reprinted here with permission of Harper Perennial, an imprint of HarperCollins Publishers.

Nancy Pelosi is the 52nd Speaker of the House of Representatives. For 31 years, Speaker Pelosi has represented San Francisco, California’s 12th District, in Congress. She has led House Democrats for 16 years and previously served as House Democratic Whip. In 2013, she was inducted into the National Women’s Hall of Fame at a ceremony in Seneca Falls, the birthplace of the American women’s rights movement. 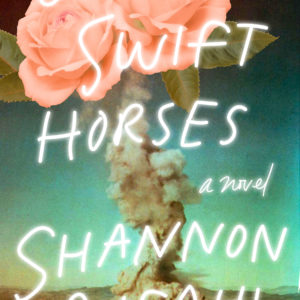 Muriel loves best those days when there are no races and the horsemen tell stories of fiasco and anomaly. At the lounge one afternoon...
© LitHub
Back to top
Loading Comments...