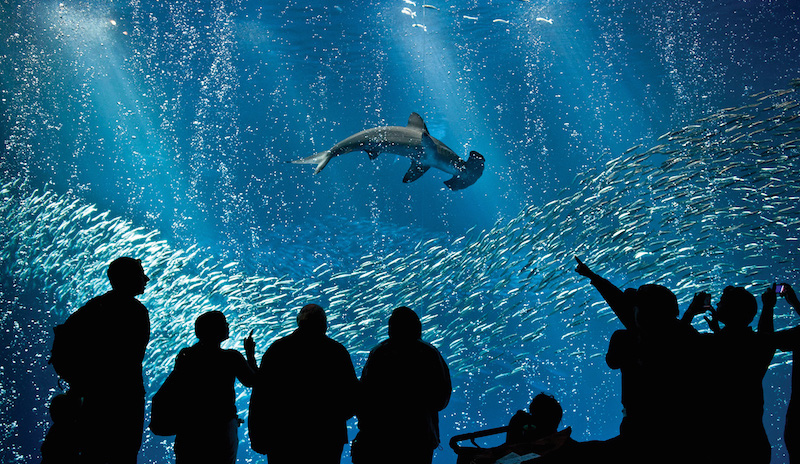 My Mother, Monterey, and the Haunted Beauty of Aquariums

Lindsay Hatton on the Faded Beauty of Her Hometown

First, the mother. Among my earliest memories are her admirers. I was three or four, and they would bend down to me so that our faces were level. They would pose the question in a way that was meant entirely for her entertainment, not mine, their gazes flitting back and forth between my right eye and my left eye in the way people do when they are actively beseeching you for something. What does it feel like to have such a beautiful mother? I was proud to be asked, but I knew not to answer. I understood, even then, that I was simply the machinery through which the flattery had to pass in order for it to sound innocent and not indecent. Plus, it wasn’t even really a question. Her beauty—in the most complete and comprehensive possible sense: inside and outside, words and deeds—was already legendary within our community. Neither my two cents nor my basic existence could polish or tarnish it, and there was a great deal of comfort in that.

Second, the place. I was born in Monterey, California in 1979: the year when the place was arguably at its most beautiful. The sardine boom and the Steinbeck era had long since ended and the Monterey Bay Aquarium was still five years from opening, so as far as the attention of the outside world was concerned, it was the calm between storms. The town and its equally attractive neighbors—Carmel, Pacific Grove, Pebble Beach—were bucolic, quiet, affordable little kingdoms devoted solely to local pleasures and local needs. I have memories of picking through the tide pools near the Asilomar without another human being in sight. My elementary school’s PE classes often consisted of running through the artichoke fields. Our camping trips took place in Big Sur on a secluded, redwood-shaded site just steps from the river. There was a little cove on Carmel Beach that was protected from the wind, and this was where we had our birthday parties.

Then I got older. The aquarium opened, the tourists arrived, things got crowded and expensive. By the time I was in middle school, I had become gangly and unattractive and I was still asked about my mom’s beauty, but now the question seemed to have a hint of accusation to it. My hometown, too, seemed newly hostile. Monterey’s white sunlight felt surgically bright and designed for the sole purpose of exposing my flaws. The fog made my hair frizz and my make-up melt. My braces and acne were not just personally unfortunate but generally insulting to the entire gorgeous coastline on which I lived. If you aren’t a natural beauty, Monterey Bay seemed to whisper, then you aren’t a beauty at all.

When I was 15—quite possibly at the apex of my self-loathing—the aquarium became more than just a tourist attraction. It became a workplace. Along with a handful of other fish-minded high school kids, I was allowed the opportunity to learn about the marine life on display and field the visitors’ questions. I still remember most of my talking points. A sea otter pelt has about a million hairs per square inch. The water in the bay is about 50 degrees Fahrenheit, the same temperature as the milk in your fridge. Giant kelp can grow up to two feet per day. I loved everything about the experience. I loved how clean and beautiful the aquarium was: all of it by meticulous, determined design. I loved being encouraged to acquire and share an area of expertise. I loved the fact that one of the other summer interns and I took a liking to each other, our romance unfurling to the soundtrack of running water. When the romance ended in September, I was heartbroken. To both assuage my ongoing grief and poke at it, I continued to work summers at the aquarium. I made up stories as I guided visitors and cleaned tanks: stories that had far less bearing in truth than the facts and figures I had been taught. I invented fables of desire and loss that would, I hoped, mirror the intensity of my pain better than real life did. I imagined a protagonist who was braver and smarter than me. I expanded the age difference of the lovers until it was symbolic and salacious. I included historical figures—John Steinbeck and others—because they were useful and hazardous, like unbroken horses: things to ride on and fight against. In college, I took my first stab at writing some of it down. But it was clumsy and clichéd and provided none of the catharsis I had always assumed great writers felt the instant pen hit paper. Even worse, it felt ugly. It felt ugly to put myself down in words, even when the stories I was trying to tell weren’t even mine.

The years passed. I relocated permanently to the East Coast. I quit writing and became a depressed investment banker. I grew better looking, or at least more tolerant of what I saw in the mirror. Meanwhile, both Monterey’s beauty and my mother’s began to deteriorate. Largely on account of the aquarium’s growing popularity, my hometown was becoming unrecognizable. Whenever I came home, places that had once felt rough and quaint and small now felt glossy and garish and huge, the prices higher, the quality lower. Mom, too, had fallen prey to something insidious and all-powerful: metastatic breast cancer. While her interior beauty continued to blaze, her exterior beauty was now marred by round after round of radiation and chemo. Her frame withered, her hair fell out. For the first time in my life, people were asking me about her not because of admiration but because of pity.

And throughout it all, the aquarium. Places that display things are haunted. I talk about it obliquely in my novel, but I’ll talk about it explicitly here. I believe that, when something is made into an exhibit, there is violence done to it. This violence, even if it’s unintentional and invisible, lingers and demands tribute. Usually that tribute is the elimination a specific type of beauty: the one we call “natural.” Even in the best aquariums, like the one in Monterey, there’s the sense that you’re looking not at fish but at perfectly curated fish-adjacent apparitions. Like characters in a novel, the residents of an aquarium have been carefully wrangled and warped, beautified not by genetics and happenstance but by borders and expectations. But you can’t be mad about it. It’s the only way to get the job done.

Perhaps my fondest aquarium memory has only a glancing association with beauty or love or storytelling. One summer—I think the second summer after the boyfriend had gone—I was tasked with cleaning the bat ray tank each morning. Because the entire tank was within view of the public, this had to be done before opening, when the aquarium was silent and empty. I would put on hip waders and grab a bucket and a long-handled scoop net from one of the supply rooms. I would stand in the middle of the knee-high water and scoop the little curls of bat ray poop from the gravel and then shake the poop into the bucket, which I had placed on the tank’s tiled edge. The bat rays were remarkably accustomed to human interaction. As I scooped and shook, they would come up and bump my shins with their snouts. They would slap me with their wings. There were no witnesses to this; I was never being watched. It was just the bat rays and me. And, of course, the ghosts.

My mother died in 2009, seven weeks after the birth of my first daughter. In the wake of these two momentous rites of passage, writing became essential to me again. I focused on the aquarium. At first, it was strictly eye-of-the-beholder stuff. Bat ray poop. A bundle of squid eggs blooming from a tank floor like a huge, rubber chrysanthemum. A wolf eel capturing a black-eyed goby in its jagged underbite. Then, I broadened my scope. I re-read Steinbeck’s books and I studied his letters and journals. I was stunned by our similarities. He, too, was fixated on the burden of his perceived ugliness, especially in comparison with his surroundings. He, too, fell in love on Cannery Row: an experience he would spend the rest of his life trying to capture in prose. He, too, knew the simultaneous fecundity and barrenness of nostalgia. He, too, abandoned the place around which his work revolves.

I’m back in Monterey a lot these day. I love it but I’m not in love with it. I don’t think anyone can ever truly be in love with her hometown: there’s too much history there, too much to claim and disavow. The aquarium, however, is another story. Whenever I take my family there, I feel giddy. I put on a brave face and I grin through the euphoric discomfort. I recall my acne and braces, I recognize the animals behind the glass as both individuals and archetypes, and I remember a long-ago day on the aquarium’s collecting boat. We were floating across the canopy of the kelp forest, about a hundred yards offshore, the bulk of the aquarium’s rear deck clearly visible in the distance. We were reaching down to collect small creatures from the kelp forest canopy: crabs, sea snails, isopods, bryozoans. The boat was rocking in the chop. I was seasick and lovesick in equal, crippling measure. When our collecting was done, we started the engine and sped back to shore. And suddenly we were surrounded by nearly three-dozen Pacific white-sided dolphins, animals beloved for both their beauty and their temperament, a welcome entourage on our short journey home.

Lindsay Hatton 's first novel, Monterey Bay, is available this summer from Penguin Press. She is a graduate of Williams College and holds an MFA from the Creative Writing Program at New York University. She is a native of Monterey, Calif., and currently resides in Cambridge, Mass., with her husband and two daughters. 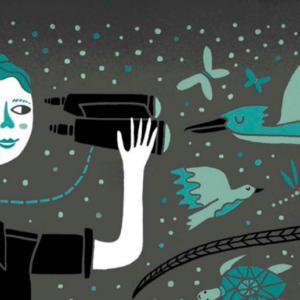