“My Language and I” 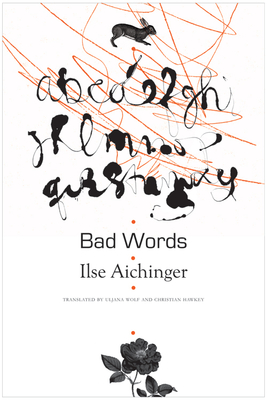 The following is from the new translation of Ilse Aichinger's short story collection, Bad Words (originally published as Schlechte Wörter in 1976). Ilse Aichinger's work was often presented in the form of parables and reflected her preoccupation with the Nazi persecution of Jews during World War II. In "Language and I," language itself is the narrator's stubborn, needy and uncommunicative companion.

My language is one that tends toward foreign words. I choose them, I retrieve them from far away. But it is a small language. It doesn’t reach far. All around,all around me, always all around and so forth. We advance against our will. To hell with us, I sometimes say to it. It turns, it doesn’t answer, it lets us happen. Sometimes customs officers appear. Your passports? We pass, they let us pass. My language didn’t say anything, but I did, I nodded obligingly, I did them this favor. One, and something around him free from suspicion. But what was around him? A coiled spring. No, smoke. There is something around everyone, don’t you know this? Oh the poor lads, I honestly feel sorry for them. Honestly, yes. Now you’re babbling. What do they have that makes you feel sorry? They’re young, that’s all—what’s there to feel sorry about? They’ll grow out of it, that’s inevitable. And then they will get strong and they will become a force. While we’re stuck in the ink, slaving away, pretending to be cheerful—while we’re losing our cheerfulness. Honestly. Who is that, who says that? Me. This cracks me up. This always reminds me of the one who said Me! when he arrived too late at his own house and wanted to be let inside. I am reminded of him, what was his profession? Custodian, I believe. Yes, custodian. Are you hungry? Because I definitely am. But I have this habit of always omitting one hunger. First one, then two, then three. But then there will be a meal, I swear, where nothing is omitted, where everything will be on the table, spread out before me. Then they all cavort around, all around me, and then I have it. Sleepy? Well sleep, go ahead and sleep. I’ll watch things for you.

This is where I sit with my language, only three meters away from people who are saying that. But we made it through, we have passed, we can settle down when we are out of breath. There are plenty of empty spots, put a blanket down, the sun shines everywhere. My language and I, we don’t talk to each other, we have nothing to say to each other. I know what I have to know—it likes cold food better than warm food, not even the coffee is supposed to be hot. This can really keep you busy. It’s a lot of work, laying out the plates, slicing the food, measuring the cold, letting the warmth dissipate. While my language is staring out at the sea. It’s easy for my language to stare, because I do everything. I don’t rush like I used to, I now calmly smooth the blanket, I calmly weight it with stones when it gets windy, but it’s true: I work and it stares. It doesn’t even express wishes. This wouldn’t be the utmost one could demand, but it would be something. A good deed, a service to me, a way to help me progress. But my language isn’t interested, that much have I already gathered. It only stares or listens to the surf, my language. I make sure that we are always near the sea. I, not it. I would like to know what would happen to my language if one day I walked inland, if I simply took a turn like other people do, picking a stone table for us between the hollows, the shaved pines. What would it do then—would it come with me? The coastal wind is bad for my ears, this much I know. Sometimes I begin to sing, or to bang the silverware, everything slowly becomes quieter. I unpack the silverware though for our kind of food one doesn’t need much—I unpack the plates and glasses, too. I hold up a knife and then let it fall, carefully, on the plate, always from the same height. For five weeks now everything has been getting quieter. Recently I tried to let the knife fall on the plate from a slightly higher distance. It banged loudly, I heard it clearly, but the plate broke. My language remained calm, its gaze pinned on the sea, always, I believe, on the same spot. It seems to be the opposite of certain paintings where the gaze follows you everywhere—its gaze follows no one. Sea monsters and fishing boats would be equally lost on it. And none come anyway. At some point I begin to set out our cold meal, I pour the cold coffee, but in vain. Carefully I’ve set everything on our blanket, often even placing a coastal flower in the middle or right next to its plate. But my language doesn’t turn around. I put the plate in front of my language—right between it and the sea foam. My joy is gone, the hearing test has dampened my spirits, and the sea annoys me. My language used to have a lavender shawl, but it’s gone. I fear we might ruin our health in this place. If my language loses its voice, then it has one more reason to stop talking to me. While I continue to besiege it with questions and offers—whispering, coughing. The lavender shawl looked good on my language, it covered its overly long neck and gave its unspoken appearance both gentleness and resoluteness. Now all of that’s gone and my language doesn’t even turn its collar up. The way it looks now, it sometimes reminds me of a mature swan, but very dull in color, as if its maturation were still ahead of it. But it shouldn’t flatter itself. From afar I hear the voices of the customs officers. They talk and talk, or at least one of them is always talking. It wasn’t my idea to settle down so close to the customs booth, but my language refused to go further. The fourth country has ended, I shouted in its ear, the fifth is right over there. It followed me reluctantly and no further than right here. The truth is, we might as well be customs officers. With them, only one does the talking, too—about food and youth while the other sleeps or stares at us through the panes, like right now. Earlier, when I searched for our passports, he was sleeping. I don’t let my language carry our passports anymore since it lost its shawl, I have them now.

They are bored over there. Or maybe they find us suspicious. They find my language suspicious, not me. I am normal, I eat and drink, and when I let the knife fall on the plate it doesn’t look to them—at such a distance—like a hearing test, it looks like clumsiness, and that’s quite alright with me. But if we stay longer, it will stop looking like clumsiness and will start to look like intent. If only my language talked to me, then I wouldn’t need this kind of hearing test, but it does very little to keep us—or at least me—free of suspicion. It should really care more about me, but I suspect it of only caring about itself. Or not caring about itself at all. Or both—how convenient. My language didn’t touch what I put in front of it—it lets sea foam salt its food. Each to his own. I think I can take this. I can also take others for my own. Or mistake them. I can become a customs chef, a customs entertainer, customs officer. The two over there will not ignore what I put in front of them. We will talk about customs, about customs items, silver and lead and similar things. About card games—I also know card games. And about my language, which I suspect will never move away from here. From its salty meal, its grey gaze. I will do what I can for it. The conversation alone will help, the conversations about it, the observations which will start repeating themselves. In time, no one will want anything from my language. And I will do my part. I will weave in a sentence here and there to make it free of suspicion.

From Bad Words by Ilse Aichinger. Used with the permission of Seagull Books. English translation © Uljana Wolf and Christian Hawkey, 2018.

Tin House Magazine’s 20th Anniversary Issue Will Be Its Last 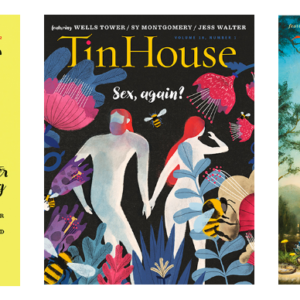