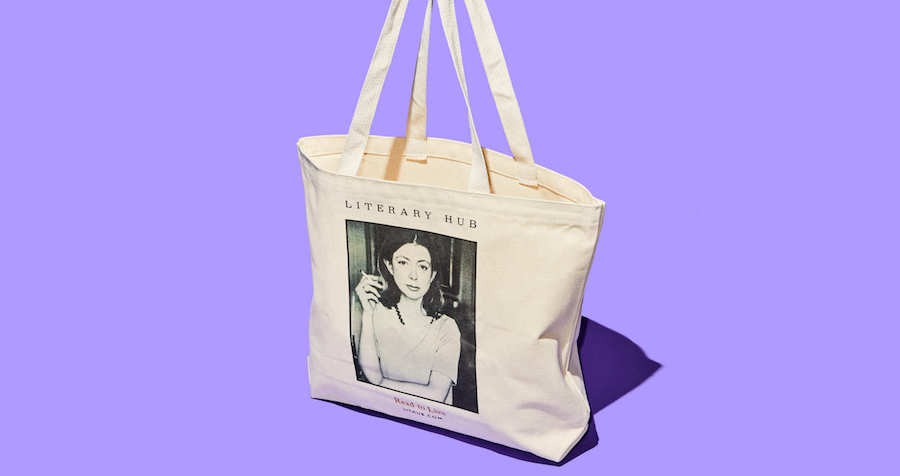 My brief run-in with an infamous literary scammer

Not to brag, but I was given one of the Joan Didion Lit Hub tote bags in the early days at AWP Minneapolis in 2015. It’s a great tote, strong and sturdy. But I didn’t have it very long. Less than ten days later infamous literary scammer Anna March asked me if I knew where to get one, and told me she’d pay someone for it or make a donation to the cause of their choice. I said she could have mine, and that there was no need to pay for it. But she did anyway. I received a gift card to Powell’s Books for $100 the next day, which for someone like me, is the equivalent of receiving a cash prize.

I hadn’t thought about it in a long time, but I’ll remember the run-in whenever I’m looking for a bag to use.

Looking back through the Facebook messages between us, I can see now her constant need to make me aware of her wealth. She is returning from Hawaii or Napa soon, or really very sick and must cancel plans (after tedious back and forth about times and places and meeting up in the future). I think Anna knew that deep down we all love canceled plans, because she was a con artist after all. I wouldn’t know the extent to which she had a history of preying on writers, especially women, until Melissa Chadburn and Carolyn Kellogg’s explosive article in the Los Angeles Times.

Less than a year after I washed the scuff marks off my tote and sent it in the mail, I received an email from Anna, though it was from a slightly tweaked version of her usual email address. And this time she was asking for money for a mysterious medical emergency and to please please don’t share this with anyone. The secret Go Fund Me was insane. There were donations from New York Times bestsellers and feminist literary icons, and there were also, albeit smaller, donations from freelance critics, unpublished MFA-grads, and poets.

What kind of a millionaire would ask poets for cash?

I often complain to anyone who will listen that book publishing is the most misrepresented industry in media and popular culture, ever. There is an episode of New Girl in which they self-publish a book, arrange a launch in one day, and there are strangers at the event. I never watched it again. Book covers are presented on poster-board two weeks before pub date, and authors are paid enough to write full-time.

There is a massive effacement of labor as most people don’t even know what the jobs in publishing are, let alone the years of work, and how many people (author, agent, editor, copyeditor, art director, designer, marketing director, publicist, sales rep, printer, bookseller, reviewer, etc.) are involved in the publication and promotion of a book that will sell for the price of a cheap lunch for two (hardcover) or cocktail (paperback).

We are a laughable target.

There are certainly people in publishing with money. Publishing is very white because it is very classist, you need financial support either from your family or a prior or simultaneous career.

I look into Joan Didion’s eyes as someone else’s tote crosses my line of vision, the inscrutable gaze of a talented and groundbreaking writer to be sure, but one who is also a millionaire. A Google search tells me that Didion’s net worth is $3 million, which surprises me at first, that that’s all, until I remember she’s a writer.