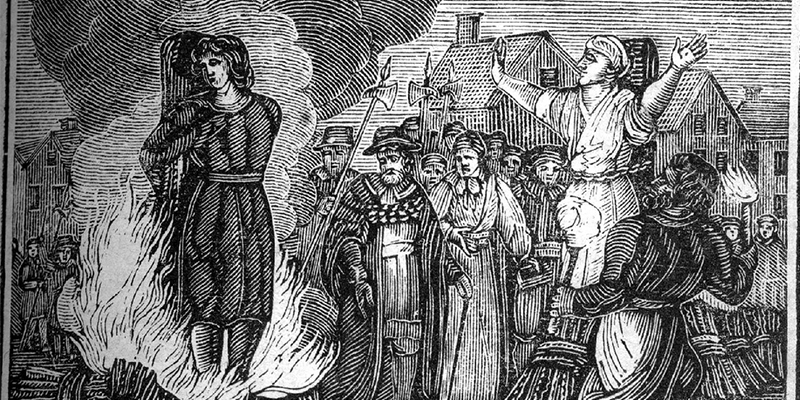 Life in early New England was dominated by piety and toil. It was an existence colonists stoically accepted; they had, after all, gone there to carve out new lives. Beneath the surface of most settlements, however, coursed dark currents of wrath.

The mid-1630s were mired in controversy, as the intransigence of godly magistrates and ministers widened sectarian fault lines in Puritanism that had existed long before anyone went to America. A shared commitment to bring change to the established Church of England, whose head was the English king, had never been enough to unite Puritans.

The question was what to change and how, and on these points there could be no agreement. Separatists and Independents cut ties with the English church, favoring self-governing congregations; Presbyterians preferred a national Puritan church. And there were many shades of opinion besides—dizzying, fraught and, in the end, irreconcilable. Before the Reformation, religion had been a Catholic monopoly; now it was a free market, swarming with different Protestant interpretations—including of the Holy Trinity, and the identity of God and Christ—which governments on both sides of the Atlantic refused to tolerate.

In New England, challenges to religious orthodoxy were also challenges to political authority, and nobody was more sensitive to such defiance than Boston’s governors: in their rhetoric and law, religious dissenters were defined as devilish heretics. The government in London, however, upon hearing of this ferment, cared only that a colonial scion was pulling away from its stock.

The Puritans’ vision of New England as a “city on a hill” was supposed to be an exemplar for the English church to which—in theory—they still belonged. Yet by 1640, if not earlier, Massachusetts Bay Colony was behaving like a free state, imposing its own orthodoxy on colonists, many of whom were either not Puritans or, at the other end of the spectrum, held views more extreme than their governors. Old England tried to assert its control over the New—but it was 3,000 miles away across the Atlantic and animated by a fierce independent spirit that was difficult, ultimately impossible, to suppress.

Witchcraft was not some wild superstition but a serious expression of disorder embedded in politics, religion and law.

In New England’s communities, as between continents, there was no end of strife. Nor was religion the only bone of contention. Yearning to improve themselves in the New World, ambitious settlers locked horns and made gains in the acquisition of estates and property at each other’s expense. Puritan idealists who had predicted that charity between neighbors, which was waning in England, would be revived in America were proved wrong. Local quarrels were to an extent contained by litigation and arbitration but could also burst into violent rage. Passions were thought to emanate from without and within, volatile souls inflamed by heavenly or demonic forces. And at the crossroads of the human and the cosmic, at the core of local society, lurked the mundane evil of the witch.

Witchcraft was not some wild superstition but a serious expression of disorder embedded in politics, religion and law. Witches were believed to invert every cherished ideal, from obeying one’s superiors to familial love. They were traitors and murderers, bad subjects and neighbors, delighting in spite and mayhem. Like other horror crimes, such as sodomy and infanticide, witchcraft represented the polar opposite of goodness and godliness, especially when, as in the mid-seventeenth century, such virtues felt gravely threatened.

Although there had been witch hunts in medieval Europe, and the belief in diabolism endured after the last execution in the eighteenth century, the so-called “witch craze” occurred mainly between the mid-sixteenth and mid-seventeenth centuries, when every aspect of political, religious and economic existence was in turmoil throughout the Western world. Witches were tangible symbols of this chaos. Every witchcraft accusation, from muttered suspicions through to the theatrics of the courtroom, was driven by the malice imputed to witches and the zeal of accusers to annihilate them.

New Englanders, like all people of the age, venerated motherhood, a virtue witches negated. Disguised as amiable wives and neighbors by day, witches were nocturnal monsters, who, like demons, crept into homes or sent envoys shaped like mice, birds and snakes. Fear of witchcraft settled along boundaries, including the line separating body and soul.

Colonists sought to protect themselves with prayer, and their thresholds with charms: magical symbols carved into posts and beams, iron knives tucked in roof thatch, horseshoes and bunches of bay hung over doorways. A victim’s urine, in which the witch’s essence was said to linger, was boiled in stone bottles to torment the witch. Bewitched food and livestock were burned to the same end. An egg swirled in water, and a sieve pivoted between shear blades, were also used to identify witches.

Witches were believed to invert every cherished ideal, from obeying one’s superiors to familial love.

Puritans detested such magic, but it was so engrained even they were not immune to it, especially at times of crisis. Though they were loath to admit it, spells were not unlike prayers, at least in purpose, and consonant with a way of seeing that understood the world as teeming with supernatural entities. Protestants knew the age of miracles had passed, yet they continued to interpret comets, eclipses, storms, plagues and birth deformities as expressions of heavenly anger. Living in New England heightened the paradox. This wild, godless world struck colonists as a natural breeding ground for witchcraft.

One Puritan lambasted native holy men as “great witches, having fellowship with the old Serpent,” drawing off his power to heal their sick. Indians were also said to use “diabolic skill” to cause harm and to consort with “infernal spirits.” But, again, Puritans distanced themselves from indigenous “superstition” because their own sense of the miraculous was, in essence, unnervingly similar. Conversely, a closeness between English and native beliefs absolved Puritans from superstition—a predilection for demons, ghosts and witches—as if the godly might be forgiven for slipping into popish error in a pagan land. America’s real witchcraft, as a pernicious crime to be stamped out, lay not among the Indians but in colonists themselves: a disease that they imported from the old country to the new, seeded there and allowed to flourish.

Springfield had not at first been obsessed with witches, whose agency was often too obscure to detect with certainty. Settlers knew they existed, but saw most misfortunes as natural or divine in origin. But from the later 1640s, as word of witch trials overseas and in New England spread, the problems Springfield’s people brought to William Pynchon were more often of a supernatural kind.

George Moxon found his congregation increasingly anxious about the devil, which he felt damaged trust in God’s mercy. Suspected bewitchment and demonic possession were not, however, merely spiritual matters: they were matters of law. Pynchon habitually consulted Dalton’s Countrey Justice, the English magistrate’s handbook: its 1630 edition included advice from Richard Bernard, a godly clergyman in Old England, about the secret marks where witches supposedly fed their diabolic imps.

Most Puritans had also read the eminent Calvinist theologian William Perkins, whose treatise on witchcraft stressed both its dangerous reality and, frustratingly, the scarcity of hard evidence for it. Other works took a similar line. The Massachusetts legal code ranked witchcraft third in heinousness after blasphemy and idolatry, defining it as “fellowship by covenant with a familiar spirit,” but without guidance for proving it. Technically, like all felonies, witchcraft required two witnesses—but whoever actually witnessed this most secret of crimes?

Though they were loath to admit it, spells were not unlike prayers, at least in purpose, and consonant with a way of seeing that understood the world as teeming with supernatural entities.

More than a year before Hugh and Mary’s arrest, in the autumn of 1649, some Springfield farmers had told Pynchon a troubling tale. They lived south of the town, across the surging Mill River, in an expanse of wetland: “Masacksic,” which colonists called “the long meadow.” This had been divided up for grazing, but some found it more convenient to build homes there, despite its being several miles from the meetinghouse.

By nightfall it was also quieter and gloomier than anywhere in town. Mists crept across the marshes, and glowing lights had been seen, as elsewhere in New England, where witnesses described cascading sparks and flames darting like arrows. One of these men, Joseph Parsons (unrelated to Hugh Parsons), believed that his wife was gripped by an unnatural power.

An early settler in Springfield, Joseph had married Mary Bliss in Hartford, thirty miles downriver, in November 1646, and a year later her widowed mother and four brothers followed her north. The Bliss family had emigrated from Devon in the 1630s, but Mary’s father died in 1640, leaving her mother with ten children. Mary’s marriage to Joseph Parsons brought fresh hope, especially after the arrival of two sons.

But when the youngest boy, just five months old, died in June 1649, Mary was seized by a distressing compulsion to leave the house at night, wandering the meadow in her shift, blind or by moonlight, in the company of a mysterious woman, whom neighbors saw but never identified. Joseph locked the front door and hid the key; but his wife always found it and was gone when he awoke. She had an uncanny ability, he said, to find any lost or hidden object and had been seen wading into the swamp, yet she’d always return dry as a bone. Joseph and his neighbors asked Pynchon for his reading of the matter. Pynchon merely expressed surprise: he “could not tell what to say to it or what to think.”

Pynchon’s noncommittal stance was not out of character. It was in his nature to observe “holy silence,” defined by the theologian William Perkins as reserving judgment about “things which are secret in our neighbor.” Gradually, though, spreading suspicions of witchcraft, coupled with growing doubts about Pynchon’s own position, made him more inclined to speak out, to discover the truth and reestablish order. History had shown that judicious governors tended to take witch fears more seriously when their own equilibrium was threatened. This is how it had been in Pynchon’s home county of Essex, which had endured great hardship and religious strife, and more witch trials than anywhere else in England. 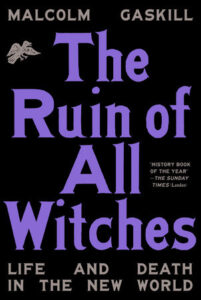 Malcolm Gaskill is emeritus professor of early modern history at the University of East Anglia. One of Britain’s leading experts in the history of witchcraft, his works include the highly acclaimed Witchfinders: A Seventeenth-Century English Tragedy and Between Two Worlds: How the English Became Americans.

A Shed of One’s Own: Louise Kennedy on the Blissful Semi-Solitude of Her Backyard Writing Space 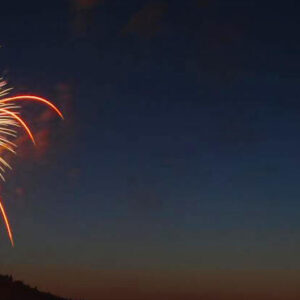 Twenty-five years ago happenstance brought me to the chance of being changed by Peter Schjeldahl. I had recently married...
© LitHub
Back to top
Loading Comments...