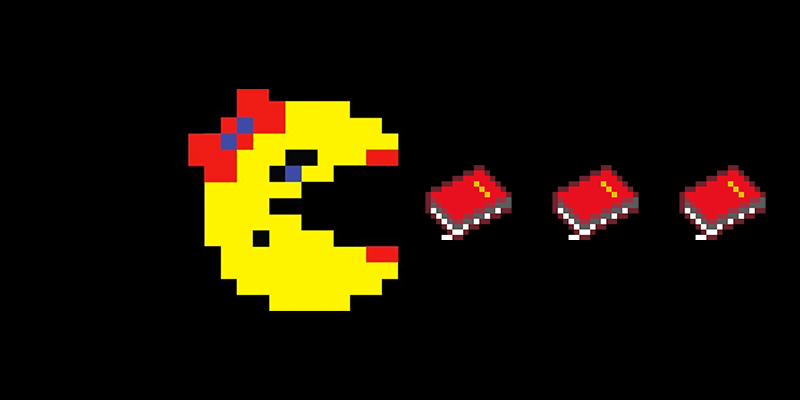 During this pandemic, a lot of people have started making sourdough and knitting and woodworking and running outside. Me? I’ve also got a quarantine hobby. It’s picking up trash from the street and bringing it into my home.

When you really think about it, these things are all the same. There is a doe-eyed optimism. There is a belief that you can create. There is the implication of a second stage of life.

At some point in the fall, my dad and I found an old arcade game in the street. Obviously, we took it. And then we dusted off the cobwebs and sanitized it a lot and then my dad did some stuff with electrical wiring and hardware replacement that I will not even attempt to understand. And then we had our very own Ms. Pac-Man.

Reader, have you ever played Ms. Pac-Man? It’s addicting as hell. I have probably spent more time hanging out with my dad playing this game in his wood-paneled basement than I have ever spent with him in all the other years of my life combined. But what exactly is it that makes you want to play just one more game? A quick Google search tells me that for most people, it’s the intuitiveness of the controls, the happy music, the bright colors, the ghosts that make you feel just the right amount of danger at all times, the feeling of constant progress of you chomp along and consume the little dots, the rush you get when you come upon a fruity power-up. But not for me. I play Ms. Pac-Man for the story.

I know, I know, it sounds a lot like “I read Playboy for the articles.” But hear me out. Once you skillfully maneuver your way through two levels of mazes, you come across the most charming interlude. The screen goes black. You see one of those director clapboards. It says ACT 1: THEY MEET. How fun! How surprising! (The original Pac-Man was not framed as a play!) It’s followed by a little cartoon of Pac-Man and Ms. Pac-Man being chased by ghosts on separate plains before finally finding their way to each other. The ghosts of their past fall away, and they ascend to a new plain where it’s just the two of them and a cheeky pink heart floating above their beautiful circular bodies. Finally! This is basically what all the best rom-coms and great love stories of our time come down to.

But then what? Believe you me, I am not a good Ms. Pac-Man player, despite the hours and hours (and quarters) I have now poured into the machine. To get to ACT 2, you must complete three whole additional maze levels, in which the ghosts of our past are back with vengeance and an alarming amount of speed, and you are just a lone blob in the world with a plucky hair accessory, just trying to find fruit—not unlike real life. You get gobbled up by the ghost, and the screen reads GAME OVER! So you start again, and you hit ACT 1: THEY MEET with relative ease, and you find yourself craving the rest of the story.

I imagine this is what it felt like to be in the 1840s, waiting on the shore in anticipation of the boat that was to bring Dickens’ latest segment around. As an avid rom-com-watcher and hopeless romantic, I can only assume ACT 2 is the point in the movie/play where they are faced with peril that tests the strength of their bond. (Is there an Ex-Pac-Man?) I can also only assume that there is an ACT 3, in which these two crazy kids work it out. And I’d really like there to be an ACT 4, in which things end happily ever after. But I don’t know.

My point is that in addition to the high of the rapidly increasing points at the top of the screen, Ms. Pac-Man is ingenious because it dangles a love story before us. Like all good serializations, it hooks us with its cliffhangers. Like all good quarantine hobbies, it has given me the illusion of progress and the promise of more chances. In a way, it implies a second stage of life.

Don’t tell me what happens next.