For years, I resisted Mrs. Bridge. I remember picking up the 50th-anniversary edition from a display of staff picks at McNally-Jackson; someone had just been gushing to me about how great it was, and at least one staff member seemed to agree: the suggestion card was crammed with cramped praise. But I was turned off by the cover, which seemed altogether too misty and domestic, an impression that the description did nothing to disabuse: this was a Classic American Novel, a slice-of-life “family story” about a wealthy woman living in Kansas City between the First and Second World Wars. It was the 1959 debut novel of a writer I’d never heard of otherwise, a white guy named Evan S. Connell. Meh, I thought.

I finally read it for the first time this year, after what must have been the hundredth recommendation from someone I trusted. It only took me about ten pages to realize what an idiot I had been. Meh, indeed. This novel is glorious.

But even as I read, enthralled, once and then a second time, I couldn’t quite figure out why.

There’s no obvious reason Mrs. Bridge should be so good, especially if like me, you’re officially bored by the broad thematic strokes outlined above. My first thought was that it had to do with the structure, which is admittedly unusual: 117 sections, numbered and titled things like “Sentimental Moment” and “Guest Towels.” At first, it seems like each section might be its own story, in the Lydia Davis style, with impacts ranging from significant to droll to mystifying. But though many sections—they’re not quite chapters—could stand alone, this doesn’t seem to be the aim. It’s as though Connell is simply organizing a series of discrete memories, only they aren’t, and can’t be his. (He’s said the character is based on his mother.) This should get boring after a while, but somehow it doesn’t; it’s amazing how quickly this book teaches you to read it. In fact, it teaches you to read it so well that by the end of the novel, the sections ceased to have any impact on my reading experience: I simply forgot about them. I stopped even reading the titles, and the interesting structure dissolved into the background. This doesn’t mean it isn’t part of the reason why the book is so good, but by the end, it felt enough like reading a normal novel that I stopped thinking those section headings could be the mysterious, magical ingredient.

Well then, what about… what happens? Mrs. Bridge is a basically plotless novel, but it is not plotless in the way to which we are most used: a man walks around, or lies around, or takes an escalator ride, and thinks about things. There is little musing in this novel. Instead, this is a novel of accumulation. While there is very little in the way of overarching storyline (unless “time passes” is a storyline), there’s plenty of everyday incident, and these add up—again, in a way it feels like literary magic. Many of the incidents aren’t even significant; some of them don’t even tell us much of anything about the characters in question. It is the fact of their accumulation that has power, even though I can’t imagine why it should.

This plotlessness is not shored up with beautiful language, either, which is the more-or-less effective cheat used by many other literary novelists. Don’t get me wrong—Mrs. Bridge is extraordinarily well written. But the writing is not about the sentences in any way. They are perfect without being beautiful. I was gratified to notice, in my edition’s afterword, that James Salter can’t quite put his finger on it either. “India Bridge, her husband, children, friends, and others around them are depicted without any trace of sentimentality in prose that is exact and scrupulously honest,” he writes. “At the same time, for reasons that confound, it is prose that is irresistible.” I too am confounded; I too cannot resist.

Meg Wolitzer, in her 2018 appreciation of the novel, cited “that hard-to-describe thing that makes any good book singularly itself. It’s the sensation that you get being inside it. This is more than a matter of character or social acuity or tone; it’s also what might be considered the book’s room temperature.” I couldn’t agree more. So what’s going on with Connell’s furnace? How does he get the temperature just so?

You could look at the way in which Mrs. Bridge herself is unraveled—both tender and frank. You could look at any one of the exquisitely rendered moments offered by the book, some quietly heartbreaking, like the final moment, which I won’t give away, or those verging on surreal, like the teacher who asks a different student every day to comb her hair while another student locates the Caspian Sea on the classroom map, or Douglas’s indestructible tower—that made me think of Cheever, or Barthelme. There are a few very funny moments, sometimes at the expense of Italians. Still, a drawer full of jewels, however spectacular, does not a cohesive necklace make, or not on its own. (Add the form, however, and we may be getting somewhere.)

Let’s get a little more specific. It is my belief that the openings of very good novels can tell us a lot about them, so let’s look at the opening section of Mrs. Bridge, which is titled “Love and Marriage.” It begins like this:

Her first name was India—she was never able to get used to it. It seemed to her that her parents must have been thinking of someone else when they named her. Or were they hoping for another sort of daughter? As a child she was often on the point of inquiring, but time passed, and she never did.

Instantly you know her: unsettled in her own skin, curious but too timid—or conscious of propriety—to ask her questions out loud, and, depending on what you read into the name India, a woman who considers herself ultimately conventional. This mode of expression—noticing something wrong but never being able to mention it—is the backbone of Mrs. Bridge’s personality, and the backbone of the book. Aha, you think, maybe not on the first read, but perhaps on subsequent ones: it’s a tragedy.

Next, India spends a little more than a paragraph considering and marrying Walter Bridge (“She had known him for several years without finding him remarkable in any way, but on this summer evening, on the front porch of her parents’ home, she toyed with a sprig of mint and looked at him attentively while pretending to listen to what he said.”), and after their marriage:

All seemed well. The days passed, and the weeks, and the months, more swiftly than in childhood, and she felt no trepidation, except for certain moments in the depth of the night when, as she and her new husband lay drowsily clutching each other for reassurance, anticipating the dawn, the day, and another night which might prove them both immortal, Mrs. Bridge found herself wide awake. During these moments, resting in her husband’s arms, she would stare at the ceiling, or at his face, which sleep robbed of strength, with an uneasy expression, as though she saw or heard some intimation of the great years ahead.

Women lead lives of quiet desperation too, Connell tells us, again with this paragraph, and also with the novel as a whole. But I want to draw special attention to the gesture in the middle: the couple “anticipating the dawn, the day, and another night which might prove them both immortal.” This kind of casual profundity is typical of the novel—you could easily gloss right over it, but there’s something arresting about invoking immortality in a paragraph meant to sum up the passage of time. It suggests that the most important things in life can’t be simply said; they have to be hidden, slipped in, suggested rather than asserted. Or maybe this is just what Mrs. Bridge has learned.

She was not certain what she wanted from life, or what to expect from it, for she had seen so little of it, but she was sure that in some way—because she willed it to be so—her wants and her expectations were the same.

For a while after their marriage she was in such demand that it was not unpleasant when he fell asleep. Presently, however, he began sleeping all night, and it was then she awoke more frequently, and looked into the darkness, wondering about the nature of men, doubtful of the future, until at last there came a night when she shook her husband awake and spoke of her own desire. Affably he placed one of his long white arms around her waist; she turned to him then, contentedly, expectantly, and secure. However nothing else occurred, and in a few minutes he had gone back to sleep.

This was the night Mrs. Bridge concluded that while marriage might be an equitable affair, love itself was not.

I actually think the section’s final line is a slight misstep—too glib by half, when Connell has just given us something incredibly powerful, a character study in two pages. We meet India, who can’t bring herself to ask her parents about her own name, though it disrupts her sense of self, and causes her pain. She gets married, and finally works up the courage to express her sexual desire to her husband. When she thinks that he’s going to respond positively she is content and secure. But then he ignores her desire. The spark of self-expression, self-determination is quashed. This pattern will repeat throughout the novel: Mrs. Bridge will try to assert herself; and when met with resistance, she will scrabble backwards, thinking of how wrong it was for her to even make the attempt. It is tragedy on the smallest scale, and the largest one.

This is actually what the book is about: a woman becoming increasingly uncomfortable in the skin of her life, but being too bound by convention, practicality, and her own fears to do much about it. And this, too, is what makes it so moving, and so propulsive: the tiny shifts in Mrs. Bridge, the feeling that at any time she might break, that something might change. It is not only a novel of accumulation, but of anticipation, and both turn out to be equally futile.

I’m not sure I’ve answered my own question, but I’m not sure it’s actually answerable. Maybe the brilliance of Mrs. Bridge can’t be singled out; it lies in the combination of elements: the unusual form, which lets the reader sit with every anecdote as if it were a major plot event (which makes it so, to some degree); the clean, clear prose with moments of profundity dropped in; the restraint; the humor; the willingness to point out the sadness and meaninglessness of the life to which Americans are so furiously trained to aspire. It is, as Meg Wolitzer put it, the atmosphere. It is the quality of mind: Connell’s, India’s. The question now, for those of us who are writers, is: how can you possibly copy it? I expect I’ll be trying to figure that out for some time yet. 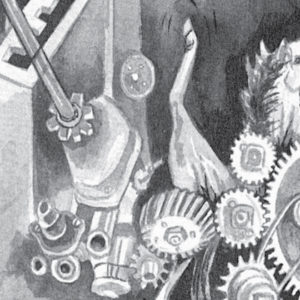