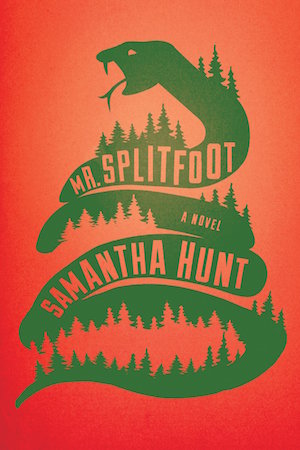 The following is from Samantha Hunt's novel, Mr. Splitfoot. Hunt's novel The Invention of Everything Else, was a finalist for the Orange Prize and winner of the Bard Fiction Prize. Her first novel, The Seas, won the National Book Foundation's Five Under Thirty-Five prize. Hunt's work has been published in The New Yorker, McSweeney's, the New York Times, Tin House, A Public Space, the London Times, and many others.

I’m smarter now that my smartphone is gone. I can pay attention in a different way. I know what strangers are thinking. I know when a town is coming before it comes because the pollution changes a half mile out. There’s a thickness to the air like when you bring the palms of your hands toward one another. It’s not magic. It’s just attention and observation.

One store, one diner, one post office, and a heavy machinery rental center. The first humans we see in this town are a pack of kids on bikes, five or six of them. They ride past, pretending we’re invisible. Ruth and I walk on, but in a few minutes the kids pass us again somehow traveling in the same direction as before. They’ve made a loop on the town’s secret byways. I raise my hand and call out, “Hello.” This greeting makes them pedal faster.

At the store I buy a loaf of bread, a quarter pound of Muenster, an eighth of salami, and yogurt. Ruth always eats yogurt.

The clerk says to me, “If you’re pregnant, you shouldn’t eat cold cuts.” Now that my belly shows, I’m public property. Strangers speak to me all the time. They tell me how I should do everything. They want to know, boy or girl? What will I call it? Cloth or disposable diapers? Breast or bottle? Women either tell me that pregnancy hurts or that it is a miracle. Old men say some variation of “Whoa! Whoa! I’ll boil the water and get some sheets.”

Nothing stranger than pregnancy could happen to a body. Not drugs, not sex. An unknown that gets bigger every day. An unknown I feel stirring, growing, making me do things my body doesn’t normally do. A program set to play. One day it will talk to me. It will die. How’s that possible?

I pay for the food. I wish the clerk hadn’t mentioned the cold cuts. Without a phone I can’t even check to see if she’s just coming up with random rules for her amusement. Making shit up.

We sit on the grass by the side of the store for a little picnic. There’s a spigot to fill our water bottles. Ruth divvies up some cheese, some meat, and passes me a sandwich. I peel the salami off and hand it back. I haven’t taken more than three bites before those kids show up again. The youngest screams out, “Howdy, yourself!” They deposit their rides outside the store.

“Where are you from?” As if salami is such an exotic lunchmeat. Elizabeth, Katy, Drew, Alex, Amy, and Charley are brothers and sisters. They stand in a half circle around us. I offer them food. Charley tries a slice of salami. The other kids watch him chew it.

“Why are you walking?”

I look up. The girl who asks looks smart.

“Why don’t you just ride a bus?” Questions flying from little mouths.

I take a bite. “Buses,” I tell the kids, “are for going to school.” The children nod. Birds chirp.

“Not just us. None of the kids here do. They shut the school down.”

“For a while. Our town couldn’t afford it.”

“That’s not what happened,” the smart one says. “The adults voted to cut the budget so the teachers walked out.”

Most of the village is visible from here. There’s one intersection. A notary sign hangs outside a ranch house. There’s an oak dresser on a porch with a for sale sign duct-taped to the front. There’s a water tower with the town’s name painted diagonally and, behind that, the school—a chain and a padlock around the front doors.

From hands and knees, I push up to standing. Ruth arranges the pack behind her shoulders and lies back, uninterested in fun or kids. She shuts her eyes in the circle of six unpeopled bikes. The kids stare at my belly as I stand. Charley, the little one, chuckles until Amy stops him. “Nothing funny about that.”

The kids lead me away from the store, oldest first. I fall in line behind small Charley. Out of earshot from the others, I tell him, “Well, it is kind of funny.”

Katy stops to pick up a stick, something to drag through the dirt. They tell me their mother had been born here, which is rare because there’s no hospital or doctors. She was delivered by a neighbor who’d given birth three times herself and so knew something about it. I tell them I have no idea how to give birth. They tell me their mother has a loom. She makes rugs and sells them to an outfit in New York City that marks the price of the rugs up 700 percent. The kids tell me their mother loves a man more than their father, but she hasn’t seen the man in twenty-five years and everything she loves about him has, at this point, been made up by their mother.

We stop in front of a small house with a concrete porch. “This is the first fun thing,” Elizabeth says. The house is vinyl-sided. There’s a discarded mini-fridge in the yard and a woman as large as I’ve ever seen, a cumulus cloud of yellowed flesh, cottage cheese in a polyester skin on a sagging double porch swing.

I steal one glance. Her average-size soul hides behind her ribcage. Sounds of body processes bounce and rebound through the spiral galaxy of her middle. She’s like a human whirlpool, pulling everything in toward her.

The children stare as if looking into an oracle. “You can say whatever you want to her. She just takes it. She can’t really move, at least not fast enough to catch you.”

The woman watches us.

One of the children tries, “Fatty.”

The woman doesn’t flinch and doesn’t take her eyes off me. I walk away quickly.

The children bombard the woman with insults and absurdities before catching up with me. After the first fun thing, I’m not certain I want to see the second, but the children take the lead and I fall back in line. Eventually I think of something to say to the large woman, but “Hello” occurs too late.

We leave the road, cutting through an overgrown lot, a garden planted during the Reagan administration. There’s a sage bush and some asparagus fronds. There’s a fence still standing. The children find a hole. Each takes his turn ducking under the wire. Alex and Amy hold it up as I squeeze beneath.

We follow a path through yellow grass. Charley sings a song about a zebra. Amy sings with him. Elizabeth turns to reassure me. “Not much farther now.” Mostly the afternoon is quiet. My eye catches some color up ahead, garbage caught in the grass, a cookie wrapper that has weathered nights and storms in this field. It was here last time I kissed Lord, last time I ate dinner at El’s.

“Is that neighbor still around?”

“The one who knew about babies?”

Elizabeth stops walking, which means we all stop walking. The path is narrow and she’s in the lead. “No. She’s gone.” She turns to look at my middle. “Why? When’s that going to come out?”

“Well.” I scratch the sides of my stomach. “I’m not sure.” I try to start us walking again, but Elizabeth doesn’t move.

I shake my chin no. All I see are the tips of my sneakers beyond my curved belly. “I never really knew.”

Someone has dumped the front door to a house in the field. It has a small diamond-shaped window with smashed glass. Charley sings, “‘He used to like to wear galoshes until a pair of oxen told him those were only for the rain. Now the zebra prefers his sneakers and wears them as often as he can.’” Big black squirrel nest in a leafless tree.

Some part of pregnancy is familiar. When I was a girl and it was quiet, I felt an enormous weight, a dentist’s lead blanket across my body. My hands would get heavy, huge, impossible to lift. The world would go soft, metallic, and heavy. That’s kind of what pregnancy feels like. That, plus the best present you ever felt coming. Mostly I’m surprised how little most people know about growing babies. No one tells you about all the weird things that will happen, like how your mouth will get full of spit. What’s that about?

The kids don’t have to tell me when we’re there. We step out of the trees and into the open. The expanse could cover eight football fields. There’s nothing there except a huge depression. We’re standing at the edge where the ground falls away under our feet.

“What is it?” My voice dribbles down into the hole. The seven of us line up shoulder to shoulder along the edge. In the space and stillness, we wait for something to happen.

Charley sings a sudden, loud pitch. His siblings join in, striking alternate notes. Like a trained choir, one child drops out to breathe while the others keep up the chord. The noise is big as a church organ. I can see it disturb the emptiness. It travels out, down, up, across the depression over to the other side. I join them, quietly at first, then I really start to belt. Breathing, belting, breathing, belting. The sounds lift us, like we could step off the edge and not fall. One noise, an awkward, ugly chord, until we are empty. Each noisemaker drops out, and when the quiet returns, it’s equally impressive. The quiet focuses everything. I run my hands over my hair, straightening it, calming something electric, and once I have, across the hole, as if we yelled him into existence, I see a man. “Who’s that?” I hit Charley’s shoulder and point. “You know him?” The man watches me. He’s huge, solid as a wall, Sasquatch in a brown jacket and dark sunglasses like a character from a cop show plopped down here by accident. He walks with a cane though he’s young. When he sees me see him, he steps back from the edge and disappears.

“Who’s who?” Elizabeth asks. The man is gone.

“There was a guy. Nothing. Forget it.” In a moment I’m easily convinced I imagined him.

“This is fun.” Especially compared to the last thing. “Singing into an old mine.”

“It’s not a mine,” Drew sneers. “It’s a crater from outer space. Meteor strike.”

I look into the woods. “A meteor made this?”

“Not a meteor,” says Alex. “It’s a sinkhole.” He’s matter-of-fact. “Our town is getting swallowed because the gas company’s sucking everything out from underneath us. That’s the real reason they closed our school. They’re getting ready to kick everyone out of town so they can get the gas.”

“That’s not it,” Charley says.

“I don’t know. I’m just a kid.” Charley starts up the sound again, and the rest of us join in. There isn’t any point to it. I’m not getting anywhere. No start, middle, or end. The children scream and I scream, and the noise we make goes out and down and round and round and round. 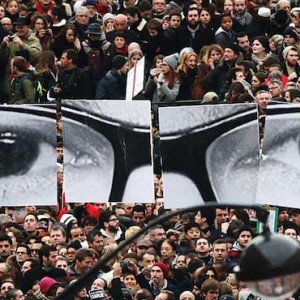 Adam Gopnik On Charlie Hebdo I read Charlie Hebdo for the first time on early sojourns in France, in the 1970s. I am probably a bit of a coward when it comes...
© LitHub
Back to top