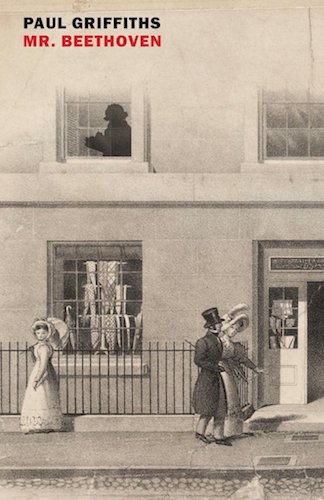 The following is excerpted from Paul Griffiths' novel, Mr. Beethoven. Griffiths is a Welsh novelist, librettist, and music critic. Admired for his writings on classical music, he has written for The Times (London), The New York Times, and The New Yorker. His first novel, Myself and Marco Polo, won the 1990 Commonwealth Writers’ Prize. He has published two other novels and a collection of short stories, along with books of music history and criticism and several librettos. He lives in Manorbier, Wales.

It may have been lit by a chandelier and lined with oak paneling that threw back a sheen, but these accouterments boasted vainly against the modesty of the dining saloon. Under the starched napkin that was now placed over his left hand, the steward raised and lowered his index finger in a gesture the boy recognized as conveying relieved acknowledgment that the passenger had successfully been brought down, querying displeasure that the bringing had taken so long, and monitory promise that the matter was by no means concluded. The boy smiled, and some of the other passengers, whose attention had been drawn from their soup plates by the belated arrival of their last traveling companion and his young escort, smiled back, before the sounds of silver dipping against china, and of more or less discreet slurps, resumed. This early in the voyage, the passengers were all a little wary of exposing themselves to conversation.

There would have been no real reason for the steward to move around the table to the one empty chair and pull it out, were there not the immediate need to make it clear to the boy that responsibility for the distinguished passenger had now passed from one to the other of them, and that the passing did not require any kind of communication. It was taken, what had not been given.

In this kind of society, the steward is very unlikely to have had any notion of the nature of his passenger’s distinction. Even less chance that the boy would; he would have noted a tilt of the head or a raised eyebrow on the part of the steward sending him on his errand, and that would have been enough. It was distinction, the awareness of which may have made the boy all the more awkward in pulling and twisting the gentleman’s attire into place, with little help from the sleep-softened body, which by now would have been seated at the table and begun venturing on the plate of soup placed immediately before it, venturing with a spoon and a slurp both almost certainly noisier than the others’.

Some of those others would, no doubt, have been more closely acquainted with their companion’s accomplishments. Perhaps all of them were. They were, after all, cabin passengers, paying notably more than those stowed side by side below decks. At some point there would have to have come, then, over the arhythmic percussion and subvocalizations of eating, another sound.

“Mr. Beethoven,” the voice began, raised, as its owner turned from taking possession of the table to focusing on the late arrival, and then, recognizing that the latter made no response, and possibly remembering something, salvaged the intervention by changing it from an approach to an imparting of information, to be expressed at a lower level, with eyes now scanning the others:

“Mr. Beethoven is, I understand, traveling to Boston to attend the first performance of a new work of his.”

This situation or explanation of the gentleman’s presence, sitting there eating his soup while the others had stopped to listen to the speaker and were deliberately not looking at the person under discussion, could have been recalled from the pages of a musical magazine but was confided as if it had been private information. Taken as such, it would have seemed more to close the topic than open it, leaving everyone but the speaker to return to the rapidly cooling soup. After a moment, with spoon still lifted and eyes striving to keep back the appearance of disappointment, the speaker would have had to do the same.

It would be possible to work out which vessel this might have been, in whose dining saloon these people were delving into their cabbage soup with greater or lesser pleasure. Suppose the year was 1833, as could well have been the case; that would give the distinguished passenger enough time to have moved on from what had absorbed him almost exclusively through the mid-1820s: the string quartet.
Not so long ago, the task of finding what could have been this particular ship—one sailing for Boston in 1833 from continental Europe, and from a port that would have been accessible at the time from Vienna without quite some difficulty—would have presented, well, quite some difficulty: a trip to the headquarters of the National Archives, in Washington, D. C., or, after 1994, to that department’s new facility at College Park, Maryland, where are housed, among other documents, passenger lists for vessels arriving at U.S. ports between the 1820s and the 1980s, these lists being printed forms, the earlier ones completed in neat, swift copperplate, presumably by immigration officials, detailing each passenger’s name, age, sex, occupation, “country to which they severally belong,” and “country of which they intend to become inhabitants” (given as “United States,” or “U. States,” or “U.S.,” or sometimes

Now the whole thing can be done at home. And it can be done at no cost, thanks to the Familysearch website supported by the Church of Jesus Christ of Latter-day Saints—not, of course, for the purposes of narrative fiction, but rather to enable adherents of that faith to identify their ancestors, who, unable in life to hear the word of Joseph Smith, may nevertheless be saved if their descendants will stand baptism on their behalf.

Skimming through the lists of the thousands who disembarked at Boston in 1833, looking for any names not obviously British or Irish, you might seize on “Abraham Hultz,” and so be led to the brig Florida, which sailed from Amsterdam with just seven passengers (leaving room, then, for your imaginary eighth), curiously, all of them men (family groups were more the norm) and relatively young (which was not so unusual). Abraham, at twenty, was the baby, and he—who had now given up on the soup—tops the list, presumably because he was first in line presenting himself to the authorities, for there is never any evident reason for how entries were ordered. Below him are Antoni and Francis Kizer, thirty and twenty-five respectively, both of them coopers and, surely, brothers, as might be confirmed by how they lift their spoons in synchrony. Next are a shoemaker, a farmer, and a baker—all useful trades where they were going—the first of them the same age as Francis Kizer, the other two twenty-eight. Last on the list was another twenty-five-year-old, J. J. Whatson, mariner, with the observation: “put on board and passage paid by U.S. Consul.” you might wonder if he, nervously darting his eyes around the table, was being sent home on account of some misdemeanor perpetrated in the Dutch capital—but why, then, as a cabin passenger, all expenses paid?

Apart from this Whatson, given as belonging to the U.S., the passengers are all said to hail from Holland—though this seems unlikely, given their names. Hultz, possibly Jewish, could have come from anywhere, though possibly not from the Netherlands, since there are no Hultzes listed in the online Netherlands phone book. Nor are any Kizers to be found there (the Massachusetts phone directory, by contrast, includes many more than could plausibly have been descended from this pair), but plenty of Keizers. Perhaps Harman Wibling, the farmer, also suffered mistranscription, for this is another surname unknown to the Dutch resource. Or perhaps he was the sole living representative of his line, emigrating to leave a trickle of progeny in Danbury, Connecticut, and Fort Lauderdale, Florida. (Unused to having a meal provided for him, he had already emptied his bowl by this point.) With Joan Floren, the aptly named baker, we at last have a potentially Dutch name, but not so with the shoemaker, Peter Wortley, who must have been British by birth.

Yet there they all were, on board the brig Florida (which, by the way, was to be painted in watercolor only three years later at Palermo, Sicily, the resulting picture to be sold, in Boston, by the auction house of Skinner, Inc., in 2006 for $8,225), bound for a new life from which, they must have thought, they would never wish to return—unlike their companion passenger, old enough to be their father.

Did each of the six, and the U.S. Consul, too, make separate arrangements with the captain? That they were all single men, and much of an age, might argue rather that they arrived as a group. If so, what brought them together, the possibly Jewish painter (Hultz), the two coopers, the very likely English shoemaker, the farmer, and the baker, all of them now awaiting with various shades of expectation the main course? They were skilled artisans, and would therefore have had some time for their own pursuits. Could they have been keen amateur musicians, the Hultz-Kizer-Wibling string quartet, joined by an English clarinetist and a bassoon-playing farmer? And the U.S. Consul, with some sympathy for his miscreant (who, his peppermint cordial spiked by laughing comrades, had been arrested for lashing out at a passing stranger), had placed him in this vessel, where, never separated from his French horn, he would be among friends. They could even get together to play their fellow passenger’s Septet.

As for that fellow passenger, he could have reached Amsterdam in stages, from Vienna to Salzburg, Salzburg to Nuremberg, Nuremberg to Frankfurt, Frankfurt to Cologne, Cologne to Amsterdam. The details of the journey need not delay the serving of the stewed mutton. The gentleman could have been there in a very few days; the others had perhaps arrived before him, awaiting the wind. And so the whole thing falls into place.

Lucy Corin on the Near-Death Experience That Changed Everything 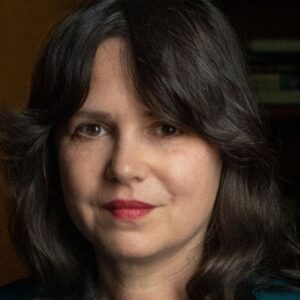 Lucy Corin on the Near-Death Experience That Changed Everything Lucy Corin is the guest. Her new novel, The Swank Hotel, is out now from Graywolf. From the episode: LC: There are a lot of ways...
© LitHub
Back to top