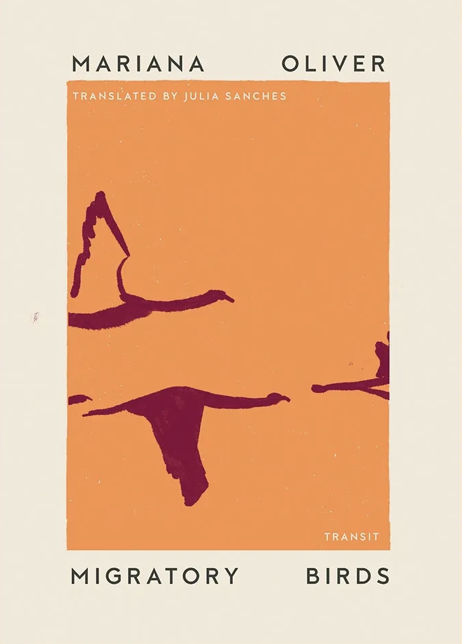 The following is excerpted from Mariana Oliver's book, Migratory Birds, about what it means to leave the familiar behind and make the unfamiliar our own. Oliver is currently working towards a doctoral degree in modern literature at the Iberoamerican University in Mexico City. Sanches is a translator of Portuguese, Spanish, and Catalan; and she has translated works by Susana Moreira Marques, Daniel Galera, and Eva Baltasar, among others.

Bill Lishman was turned down by every aviation school in Canada. No amount of enthusiasm will help if a runway and a field of grass look the same color. If a recessive gene is passed down through generations and settles in your X chromosome so that you can’t tell red from green, you won’t be working as a firefighter, a painter, or an electrician. If you can’t tell a fresh apple skin from one that’s too ripe, you won’t be allowed to pilot planes. You’ll have to watch them through the window, like birds.

Just like that, as he watched birds through the window, a young Bill Lishman looked down at his featherless skin and realized he envied their wings. So he decided to build himself a pair to amend his imperfect body. Before him, mankind had learned to fly by observing the movement of birds: the flight of birds and of planes is governed by the same principles. Wings are flat, aerodynamic surfaces that rely on the force of air; the pressure above needs to be lesser and the pressure below greater. This is the key to defying gravity.

One advantage of growing up in the countryside is that any backyard can be turned into your own practice runway. Bill used to climb a hill every day, dragging behind him the other half of his body: a broad, delta-shaped canvas surface that he strapped to his torso on reaching the summit. Fitted with wings, he’d dash downhill and a gust of wind would lift him from the earth. On a successful takeoff, the feeling of the ground brushing his feet was first and last. His body gracefully rose above the house where he’d grown up and above the row of monochrome trees. Then came the inevitable descent, when the body’s weight doubles and the wings turn into painful prosthetics, cheap knockoffs.

Because his flights felt shorter and shorter and he was tired of hauling his delta wing up the hill time and again, Bill added an engine. By the late seventies, Bill Lishman had become a pioneer of ultralight aviation.

Sometimes, out of the blue, you catch a glimpse of the future. A moment of insight that disrupts the day-to-day, a revelation that becomes impossible to shake off. In the middle of a practice flight, Bill noticed he was no longer alone but encircled by a large flock of ducks migrating south. For a couple of minutes the speed of the birds and of the aircraft were one and the same, and together they traveled a short distance. It was like his body had multiplied. As he flew among the birds, Bill became one too. And even though he’d taught himself to pilot planes because he enjoyed solitude, the airborne company of those dusky-brown birds was an unexpected pleasure that made him feel less vulnerable.

He was Canadian and had an abundant, salt-and-pepper beard. His flight goggles left a crisp line around his eyes, beneath which sat a long and ruddy nose. They were talking about him on the news because he’d raised sixteen wild geese in his backyard. He’d taught the geese how to eat and defend themselves, and that the first step to overcoming fear is balance. Journalists recounted with astonishment that Bill Lishman, in anticipation of winter, had led his geese along a southbound route to a place where the weather was less severe. He flew a thousand kilometers with them, from Ontario to Virginia.

Bill told himself when he got home that some trips can only ever be taken in one direction, that he would never see those geese again; after all, it’s impossible to find the way back when there are no tracks to follow. He forgot that home is a route anchored in memory. The geese flew back the following spring. They returned to the place they’d left and even though they’d been changed by the trip, Bill could still tell them apart. Which is why people started calling him “Papa Goose.”

Certain bird species are naïve. They leave their shells and entrust their lives to the first thing they come into contact with, be it their mother, their father, or any other living or mechanical thing. They follow them wherever they go and mimic their behavior to make them happy, which ensures their survival. This is similar to how children form bonds with their parents, and why they imitate their expressions and movements, and learn to use words and phrases they don’t understand as though they were their own. Home is also a mirrored gesture.

A famous photograph illustrates this behavior. In it an elderly man walks through a field in shorts and a baggy shirt; he smokes a pipe and looks down at the ground, deep in thought. Behind him waddle a row of ducklings that seem like they’re in a rush. The man is Konrad Lorenz, an Austrian zoologist who had dedicated his life to studying avian behavior. From the image it’s clear that the ducks are following Lorenz, and yet the path he follows is hidden from sight. In most photographs of Lorenz, ducks keep him company.

Before their habitat was destroyed and their population was decimated by hunters, whooping cranes lived in North America and migrated south every year. By the 1940s, they were a species condemned to disappear, reduced to a series of photographs. A group of cranes was raised in captivity in a bid to save them, but the results fell short. Once they were reintroduced to the wild, the cranes were reluctant to breed and when they did, were unable to care for their colts. Come fall, they ignored their instinct to migrate and joined a group of sedentary birds; they didn’t survive. In captivity, cranes never live beyond infancy.

Migration is one of the most fascinating behavioral patterns of certain bird species. An enduring need for repetition that compels them to travel great distances, even at risk to their lives. Hence the reason they fly in groups. In a flock, the bird that acts as guide and figurehead is also the one that breaks the wind, mitigating air resistance for the other birds. Day after day they swap positions and share the burden of their journey. Among migrating birds, permanence is an acceptance of death.

Some years ago, Bill Lishman joined a group of researchers whose goal was to save whooping cranes from extinction. Someone reasoned that since Bill had led a flock of geese hundreds of kilometers and the geese had been able to find their way back, he might do the same for cranes. In captivity, the work starts before the cranes are born. Eggs are placed in incubators and the caregivers play a recording of an ultralight engine three times a day. When the chicks break through their shells, the first thing they see is a crane-shaped puppet that little by little teaches them basic things, like how to find food and regulate their sleep cycle. As soon as they sprout feathers, the cranes learn to fly with help from an ultralight painted in matching colors. Following the sounds they know best, they undertake the first migratory journey of their lives from Wisconsin to Florida. Home is also a recording from childhood, an implanted memory.

A man pilots a yellow ultralight across the sky. His name, Bill, Bill, Bill, is the last thing he hears before his feet take wing. All liftoffs are the same, he thinks, a ritual by which we become birds. As the body rises, the mind blots out all sounds and refashions them one by one, as if they existed in isolation. First heartbeat, then breath, then saliva moistening the throat; then the whoosh of air as the ultralight’s wings break it into a white trail. Bill, Bill, Bill, his name echoes three times in his helmet. If they’d yelled out the name William, which is what his father used to call him, he thinks they’d only have managed to say it once. Though it’s possible they’d have dragged out the vowels so that each syllable hovered in the air for as long as possible. Even though everything seems clearer to him from far away, he knows it’s too late to glance down and take in everyone saying goodbye or the childish astonishment that lights up people’s faces whenever they see a flying machine. From the distance where he is, all expression is beyond grasp.

As though sensing his thoughts or wanting to interrupt them, the flock behind him begins to whoop. Ever since he first heard them, Bill has had the feeling that whoever decided to call those birds whooping cranes had never flown beside them; way up high, their cries are of jubilation, not the dissonant celebration of a death by hunting. The cranes stretch out their legs and long necks as they fly, and the black edge on the mirror-side of their wings contrasts with the snow-white feathers above them. They grow larger and majestic when defying gravity. The cranes soar, charcoal strokes across the sky.

Bill smiles, having just realized that the cranes and the ultralight only look the same to his eyes. Anyone seeing him from below would think they were staring up at a peculiar-looking flock. They’d believe the cranes had lost their minds, trailing behind a big yellow bird.

All the Cowboys Ain't Gone by John J. Jacobson, Read by Grover Gardner 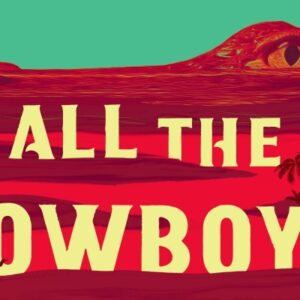 All the Cowboys Ain't Gone by John J. Jacobson, Read by Grover Gardner Every Monday through Friday, AudioFile’s editors recommend the best in audiobook listening. We keep our daily episodes...
© LitHub
Back to top