I first came across Peter Singer in 2006, via an article he wrote in the New York Times Magazine. He was discussing the “Golden Age of Philanthropy.” Warren Buffett had just pledged $37 billion to the Gates Foundation and other charities, which on an inflation-adjusted basis, Singer noted, was “more than double the lifetime total given away by two of the philanthropic giants of the past, Andrew Carnegie and John D. Rockefeller, put together.” Singer posed some simple questions: What should a billionaire give to charity? What should we (non-billionaires, ostensibly) give? And how do we calculate these numbers?

What struck me about Singer’s arguments was that the amount in question, for him, wasn’t theoretical. It was calculable. There is an amount of money one needs to live a decent life—to pay for a reasonable amount of rent, clothes, food, and leisure. And if you have more than that amount, he posited, you should give it away—because you don’t need it, and someone else does.

The bluntness of it made me chuckle. It was a straight-faced, matter-of-fact shrug of an argument, and even as I formed my own responses to him in my head, I kept having the same thought, over and over:

“Well, geez. I’ve never looked at it that way before.”

Ten years later, I was researching various topics in moral philosophy for a TV show I was developing, called The Good Place. As I drifted into utilitarianism—a philosophy arguing that the moral worth of an action is based on its consequences—Singer popped up again and again. With each of his articles or books that I read, I found myself reacting with the same mix of fascination, dismay, excitement, and disbelief. His writing was clear, unambiguous, uncompromising, and, at times, shocking. Arguments I at first found to be absurd would wind up seeming eminently reasonable . . . and vice versa.

But what stuck with me the most as I read his work—particularly about charitable giving—was how often I came back to that original thought: “I’ve never looked at it that way before.” And the power of that thought has stayed with me.

Living even a modest life in a wealthy, (relatively) stable country like America can provide a level of comfort—and this is not an exaggeration—greater than that of King Louis XIV in his palace at Versailles. Chances are you have most or all of the following: running water, indoor plumbing, air conditioning, a refrigerator, a TV, internet access, and a washing machine. (Read up on 18th-century hygiene some time: Louis XIV would’ve given half his wealth for a mechanical washing machine.) Even today, measured on a global scale, these simple comforts are absurdly luxurious, and they are also—relatively speaking—cheap. But the most common commodity that life in a wealthy country can provide you is also the most insidious: complacency. It is easy, even for a person of average income, to take the basic comforts of life for granted. And for the wealthy, it is absurdly commonplace to do so.

At its core, Singer’s book asks us to consider a very simple truth: a life is a life, no matter where that life lives.

Which is not to say most people’s lives are easy. Far from it. Most people’s lives, even in the wealthiest nations, are full of economic stress, painful moments, personal and professional disappointment, medical trauma, difficult decisions, trials and tribulations, anxiety, and suffering. Which makes it even harder to remember that having three dollars to buy a hamburger is a luxury that hundreds of millions of people living in extreme poverty cannot conceive of.

Enter Peter Singer, and The Life You Can Save.

At its core, Singer’s book asks us to consider a very simple truth: a life is a life, no matter where that life lives. A human being over there is no less valuable than a human being over here. It then asks us, given that simple transitive property of inherent human value, to consider treating that life over there with the same care and attention we give to lives over here. That’s all. That’s the “ask.”

In the book The Life You Can Save, you’ll read some extreme examples of how people approach the conclusion that all lives are equally valuable. You’ll read about people who gave away their entire fortunes—tens of millions of dollars—because they concluded that having a single dollar more than they needed to live was morally problematic. You’ll read about people who voluntarily gave away their kidneys after reading that the chances of dying due to having only one kidney are 1 in 4,000, and thus not giving away their “extra” kidney would have meant valuing their own life 4,000 times more than someone else’s.

If you’re like me, you’ll read these stories, and you’ll feel a lot of things in rapid succession. You’ll feel awe and admiration for people who can be so devoted to helping others. You’ll feel shame for not being one of those people. You’ll feel like those people are nuts, because wandering into a doctor’s office and saying, “Please take my kidney and give it to a stranger who needs it,” is not the kind of thing you have ever imagined doing. You may even feel like a terrible hypocrite, because even though you already do a great deal to help other people in need, you also own a large flat-screen TV, and a soft comfy bathrobe, and an autographed baseball bat signed by your favorite player that cost $300—none of which, technically, you “need.”

And then you may feel anger, because you think of yourself as someone who tries to do the right thing whenever you can, and you like your comfy robe—it’s comfy, dammit!—and who is this guy to tell you that you shouldn’t buy that robe, anyway, and also he’s talking about giving away your kidneys, and how is that any kind of reasonable standard?!

But this is exactly the point. Because more important than what you feel when you read this book is what you will not feel: complacency.

You will not feel like other people don’t matter. You will not blithely scroll past reports of disasters, whether abroad or close to home, without considering—even if just for a moment—the impacted lives of those affected. Instead, you will have, bouncing around in your head, the thought that there may be something simple you can do to help, something that does not disrupt your life or put you or your family’s well-being in peril.

So don’t worry, prospective reader: you do not have to give away your kidney, or bankrupt yourself to improve the lives of the extremely poor, to abide by the tenets of this book. You merely have to ask yourself a few questions: what am I doing, as a human being on earth, to help the less fortunate? Can I, perhaps, do a little bit more? And if so, how?

Which are questions worth asking. 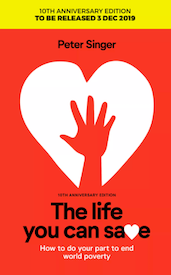 Michael Schur is a television producer, writer, and actor as well as the creator of The Good Place. 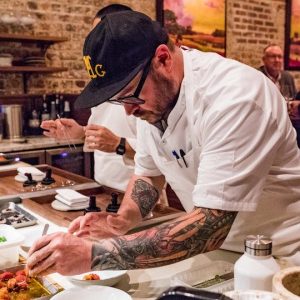 Born and raised in rural Virginia, Sean Brock helped to grow everything his family ate, cooking, preserving, and learning...
© LitHub
Back to top
Loading Comments...