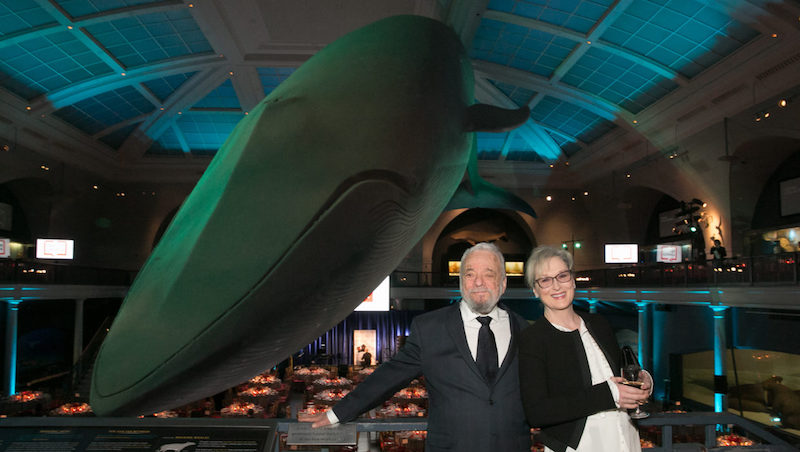 The PEN America Annual Literary Gala is one of the fanciest of galas, taking place at the Museum of Natural History and getting even the most reclusive writers into formalwear. This year’s gala honored The Women’s March, imprisoned Ukrainian filmmaker Oleg Sentsov, and Stephen Sondheim, and boasted an appearance by Meryl Streep. This is the second literary event I’ve been to this month where Meryl Streep was in attendance. I like to think she knows our world is in turmoil and wants to help the artists get to work. I thought I’d ask some people what their favorite Meryl Streep movie was: such an innocent question! But we all know writers are cagey and complicated people, and no one trusted the simplicity of this question.

“My favorite role of Meryl’s is political agitator,” John Maher, associate editor at Publisher’s Weekly, told me. “Obviously she’s a great actor, but really I just love when she annoys people politically.” Hear, hear. Paul Morris, vice president of Author’s Guild, strategic director at House of Speakeasy and former man-about-PEN, would not answer any of my questions. What’s your favorite Meryl Streep movie? How is the first PEN gala you’re not working at? Where were you during the Women’s March? “No comment,” he said. “Say that I said no comment!” As you wish!

Next I asked Alex Berenson, a New York Times-best selling author of several thrillers, the Meryl question. He seemed hesitant. I suggested he could also tell me something serious, like what PEN meant to him. He told me about Joseph Roth, an Austrian-Jewish journalist and novelist who moved to Paris when Hitler came to power. “The writers always know when things are going to get bad because writers are pessimists,” he said. PEN tried to help Roth come to the US, and even though he died before it happened, it showed that “PEN has been trying to help writers for a long time.” He paused. “And Sophie’s Choice.”

I ran into Marya Spence from Janklow & Nesbit and commiserated on how hard it was to want to get dressed in this weather, but she was wearing a satiny wrap dress that she called “fake vintage” which accurately masked any troubles. Zadie Smith was often surrounded, a pastel anomaly in a sea of black and white in her pale pink dress and crystal blue head wrap. Alan Cumming was leaning on the bar in a skinny black tie. Markus Dohle, the CEO of Random House with the very good hair, told me how much he liked the Literary Hub totes with Joan Didion on them.

I saw Margo Jefferson from afar and with my third glass of wine in hand lingered near her at the bar. I waited for her to order a drink (I have manners!) and then told her I loved Negroland. She was enthusiastically kind and I commented on her glamorous velvet blazer. “It’s all hand-me-downs!” she said. We agreed that all the best outfits were vintage. When her companion turned to me, I realized it was Elizabeth Kendall, a nonfiction author who was my art criticism professor in graduate school and often made me rewrite my papers three or four times. “Giving criticism takes more time,” she said, by way of acknowledging this, and I took it as a slight compliment (another thing about writers is that they really want compliments). She and Margo told me that they met in the 70s taking tap dance together. I could listen to friendship origin stories like that all night, but dinner was approaching and the waiters began flitting around the large dinosaur, tapping on xylophones to softly urge us to the next room.

Dinner takes place under the big whale, with dozens of mini-tables set up and hosted by literary luminaries like Rita Dove, Masha Gessen, and Salman Rushdie. When Meryl Streep presented the 2017 PEN/Allen Foundation Literary Service Award to Sondheim, she told a story about when she once went to his house and asked him to sign her sheet music for the song he’d written her. When she got into her cab, she finally peeked at the message: Don’t fuck it up.

Meryl said she felt pressure to pay tribute to the master, but she sees special meaning in him winning this year. “When we debate whether and how to hold onto the America we know and love, we are thinking of the America that Stephen Sondheim has revealed to us… An America that is far from ideal—that grapples with its flaws earnestly, if imperfectly. An America that is empathic, mindful of the vulnerable and broken, honest.”

READ THE REMARKS OF HONOREE JOHN SARGENT, CEO OF MACMILLAN, ON THE IMPORTANCE OF THE FIRST AMENDMENT TO PUBLISHERS

When Sondheim came up to accept the award, he joked that he wasn’t sure if he was worthy. “I write songs for musicals, for God’s sakes—but if Bob Dylan can win the Nobel…” He was being humble, however, as he does quite a bit of philanthropy and everyone seemed pleased to see him honored. The 2017 PEN/Toni and James C. Goodale Freedom of Expression Courage Award went to The Women’s March, which was accepted by co-chair Bob Bland, who walked onstage wearing a red pussy hat matching her red dress. “The nature of courage is the ability to do something that frightens us,” she said. “Lean into fear and grief. This is not a partisan issue, it’s a fact: women’s rights are human rights.” Suzanne Nossel, executive director of PEN America, presented the 2017 PEN/Barbey Freedom to Write Award to honor imprisoned Ukrainian writer and filmmaker Oleg Sentsov to his cousin, Natalya Kaplan.

And in a fitting nod to our dystopian world, Robbie Gordy of Christie’s led an auction for a first edition of 1984 signed by Meryl Streep, Stephen Sondheim, and the other literary hosts. It went for $28,000, and helped the gala raise over two million, a new record for PEN at a very crucial time. Even though the night was full of sparkling distractions, of tuxes and floor-length gowns and endless trays of wine, of writers being treated like celebrities, I think we can hear Sondheim’s advice in our heads: don’t fuck it up. This is a time when the artists are needed most. 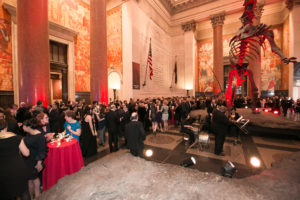 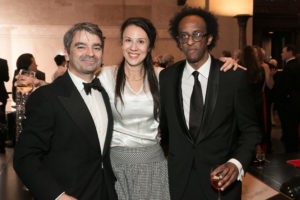 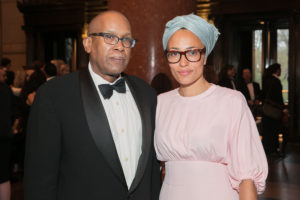 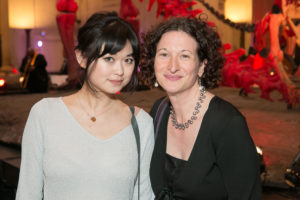 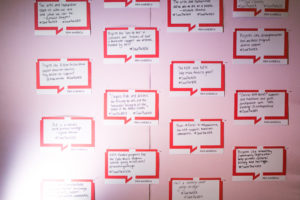 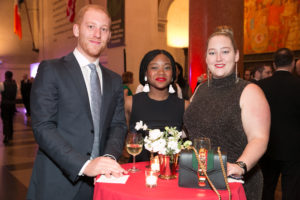 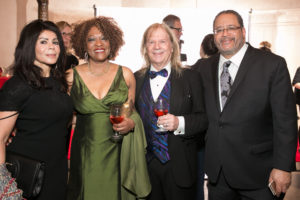 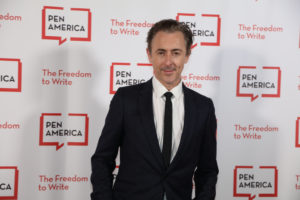 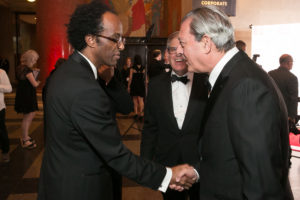 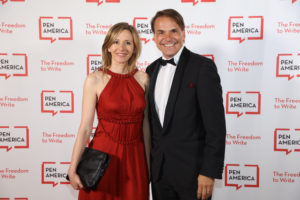 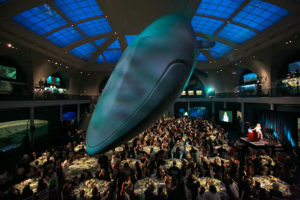 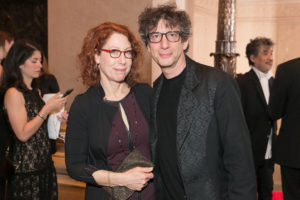 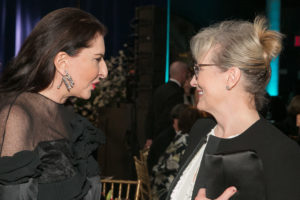 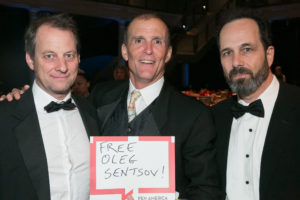 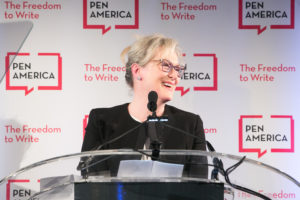 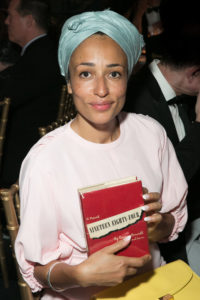 Zadie Smith with the auctioned-off first edition of 1984 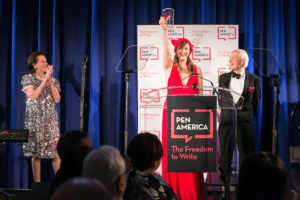 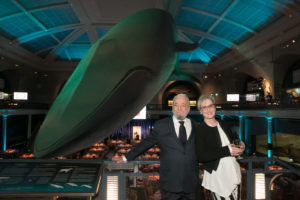 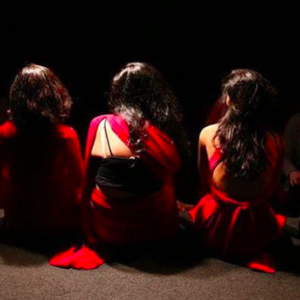 Twenty years ago, the Asian American Writers’ Workshop in New York City was on St. Mark's, in a space that was once, according...
© LitHub
Back to top
Loading Comments...