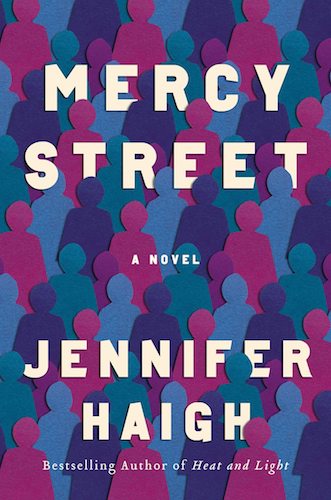 The following is excerpted from Jennifer Haigh's new novel, Mercy Street. Haigh is the author of the short-story collection News from Heaven and six bestselling and critically acclaimed novels, including Heat and Light, which was named a Best Book of 2016 by The New York Times, The Washington Post, The Wall Street Journal, and NPR. Her books have won the PEN/Hemingway Award, the Massachusetts Book Award, and the PEN New England Award in Fiction, and have been translated widely. She lives in New England.

The storms kept coming. There was a feeling of meteorological unease. The pigeons of Copley Square whuffed their displeasure. At the corner of Mass and Cass—the epicenter of the Methadone Mile—volunteers handed out blankets. Commuters waited for buses that never came.

Schools closed for a day, a week, for two weeks, prompting a citywide childcare crisis. In the Savin Hill section of Dorchester, streets were taken over by boys on sleds.

Boston descended on Star Market girded for battle. Toilet paper, bottled water, frozen pizzas. It was impossible to keep these items in stock. Checkout lines were staggering. Shoppers read the same headlines over and over, the aging starlet who was married again or pregnant again or fat again. They studied the contents of each other’s carts, a stranger’s secret comforts: cartons of cigarettes and extra-sensitive condoms, tubs of ice cream and cases of IPA.

In the neighborhoods, shoveling took on a feverish intensity. Parking spaces were saved with wheelbarrows, with lawn chairs, with recycling bins.

The boys attacked Savin Hill with whatever was handy: cafeteria trays, trash can lids. They raced down the slopes with war whoops, shrieks of terror and delight, because childhood always finds a way.

Years ago, when Claudia was just starting out on the hotline, the callers’ questions amazed her. For a startling number of people, the basic facts of human reproduction were shrouded in mystery. She answered calls from women who douched after sex, or had sex only while menstruating, and were stunned to find themselves pregnant. More than one truly believed she’d contracted herpes from a toilet seat. And these weren’t teenagers; they were grown women. Teenagers would have known better.

Considering what passed for sex education thirty years ago, in the public schools of Clayburn, Maine, this made a certain kind of sense.

It happened in a single afternoon that fell, in 1983, on the first warm day of spring. In Maine, it is a holiday of sorts: the hats and gloves packed away, the Bean parkas moved to the back of the closet. These are the rituals of a primitive people blessing the return of the sun. At Clayburn Middle School, the sixth-grade boys whooped it up during an extended recess. The girls, meanwhile, were trapped indoors, sequestered in the cafeteria for a Very Special Presentation by a sales rep for the Modess corporation, an ebullient young woman whose entire job was to drive back and forth across New England showing schoolgirls a filmstrip about menstruation. After the movie, she handed out sample packs of Modess sanitary napkins. At age eleven, the girls had no possible use for these items; in 1983, synthetic hormones had not yet reached alarming concentrations in the American food supply, and puberty was still a ways away. Still, most were poor enough that getting something—anything—for free was worth crowing about.

The sales rep showed them how to wrap a used napkin in toilet paper and dispose of it properly. Through the open window they heard the crack of ball against bat, boys cheering and shouting. Someone had scored a run.

Along with the napkins they were given a booklet printed on heavy paper, with a title in curlicue script: Growing Up and Liking It. It looked like a child’s storybook, and in a way it was. The main character was a girl named Patty, whose family had moved to a new city and who kept in touch with her old friends, Beth and Ginny, by writing letters (a quaint notion, even in 1983). The girls swapped news about school and boys, but mostly about getting their periods and using Modess products. They discussed the mysterious requirements of “heavy flow days” and “light flow days,” and whether you could wash your hair or shower during your period.

Who would even ask such a question? Why would anyone think you couldn’t? Even Claudia knew better, and she knew almost nothing. Her information about sex came mainly from Justine, who knew as little as she did, but with greater certainty. From the moment Justine got her period, Claudia wanted one desperately. This was Justine’s superpower. She could make anything— even bleeding from the crack—seem glamorous.

Of course, none of that had anything to do with sex. For that, Claudia turned to television. Vague references to the act—what Bob Eubanks, the toothy host of The Newlywed Game, called making whoopee—were everywhere, but actual information was rare. At least once per episode of The Love Boat, a make-out scene would cut to a close-up of the do not disturb sign being placed on the cabin door.

What happened after the door was closed? Answers were elusive. Her mother, naturally, was no help. If forced to speak of certain body parts—for instance, when toilet-training a foster— Deb resorted to euphemism. A girl’s private area was called her princess. This caused a comical confusion in the summer of 1981, when Deb, who loved weddings, woke the whole family at dawn to watch the British royals get married. When Prince Charles made Lady Diana Spencer his princess, the fosters couldn’t control themselves. Their giggling could not be contained.

Her afternoon with the Modess rep did nothing to enlighten her, and yet, for some reason, she’d needed a parent’s permission to attend the session. Deb had signed the form without comment. They’d never had a conversation about sex and never would. The following year, when Claudia started bleeding, she saw no reason to mention it. She simply swiped a maxi pad from the box under the sink.

Naomi and Claudia were working the hotline.

The caller gave her name, Brittany, and asked how Claudia’s day was going. Never underestimate the politeness of mannerly young women! Even those who’d been date-raped or infected with chlamydia were happy to observe the conventions, reflexively eager to please.

Brittany sounded anxious. Four days earlier, she’d had unprotected sex. She was scared to death she might be pregnant.

“It just happened,” she said—apologetically, as though she had wronged Claudia personally. “It was all my fault.”

Over the years, Claudia had heard the same words from teenagers and middle-aged women; from nurses and teachers, cops and soldiers; sex workers and rape victims and survivors of incest. It was a lesson they’d been taught from birth, swallowed and digested: at all times, in all circumstances, the woman was to blame. Claudia resisted the urge to correct them. If you’re pregnant, you had help.

Brittany said, “What can I do?”

It was a simple question with a confusing answer. Most pharmacies in Massachusetts dispensed emergency contraception without a prescription. The morning-after pill could be taken within five days of unprotected sex, but its effectiveness diminished with each passing day. To complicate matters, it was less effective in overweight women. Explaining this to a caller was delicate.

“This is a little personal,” Claudia said, “but how much do you weigh?”

Silence on the line. Of all the prying questions she asked the callers (Does it burn when you urinate? Is the lesion red, or crusted over? Is your husband circumcised?), this one incited the most outrage. She’d been called a nosy bitch, a body Nazi. Occasionally a caller hung up in disgust, but no one ever said I don’t know. Claudia had yet to encounter a woman who didn’t know her own body weight. (Her mother—a woman who could polish off a can of buttercream frosting in a single sitting—had known her weight to the ounce.)

Claudia explained that for a woman her size, the safest bet was an IUD, which prevented implantation. The insertion took just a few minutes. Dr. Gurvitch had an opening in her schedule and could see Brittany that afternoon.

But there was a complication: Brittany lived in rural western Massachusetts, far from public transportation, and didn’t own a car.

There was always a complication.

In Brittany’s case, the answer was clear. She lived half a mile from a CVS drugstore, which dispensed the morning-after pill without a prescription. After four days it would be less effective than an IUD, but far more effective than doing nothing at all.

When she hung up, Naomi stripped off her headset. “Was that another EC? That’s the third one today.”

“It’s the snow,” said Claudia. “Storm babies. It accounts for half the population of New England.”

“These girls,” Naomi said, shaking her head. She spoke of the callers as if they were her own daughters: What are these girls thinking? Exasperation in her voice; affection, amusement, a grudging admiration. She seemed to be rooting for them. Naomi was the mother Claudia wished she’d had.

She often had this feeling about acquaintances and even strangers, as though parents were parts of a life that could be swapped out like an alternator or a fan belt. The truth, she knew, was more complicated. If Naomi had been her mother, she would be someone else entirely, unrecognizable to her current self.

Unlike Claudia’s mother, and unlike Claudia herself, Naomi was patient. Answering the same questions—month after month, year after year—Claudia sometimes wanted to throttle the callers. Their crises seemed unnecessary. Truly, it was not that difficult to avoid getting pregnant.

“How was Maine?” Naomi asked.

“Did you have a talk with your tenant?”

“Not yet,” Claudia said. Nicolette’s phone still wasn’t answering, which might mean anything or nothing. “I’ll run up there next week, maybe. It isn’t urgent,” she added, which may or may not have been true.

At noon, predictably, the line fell silent. Friday afternoons were always dead; young women were otherwise occupied, furiously calling and texting, making plans for the weekend. In a few hours they’d be off doing the things they’d be calling the hotline about on Monday morning. Claudia was about to step out for lunch when the phone rang again.

She slipped on her headset.

“Hello?” The caller was male—unusual, but only a little. About a third of the STD patients were men. This one had a deep voice, a hard Boston accent. “What is this numbah?”

“We’re a medical facility,” said Claudia. “This is the counseling line.”

“How can I help you?” Claudia said.

“My wife has been calling this numbah.” Traffic noise in the background, a motorcycle roaring past. “Her name is Alicia Marzo. M–A–R–Z–O. Is she a patient there?”

“That information is confidential,” Claudia said.

A car horn in the distance, the Dopplered wail of an ambulance passing. The caller was driving somewhere.

“Are you shitting me? This is my wife we’re talking about.”

“It’s called the Health Information Privacy Act,” she said evenly. “You can Google it.”

Another car horn. The caller, clearly, was a lousy driver. Hang up the phone, buddy, she thought. Keep your eyes on the road.

“This is bullshit,” the caller fumed. “Let me talk to your supervisor.”

“I am the supervisor.”

“I’ll come over there if I have to,” he said, louder than necessary. “Someone will have to talk to me.”

“I wouldn’t advise that,” said Claudia, but the line had gone silent. He’d already hung up the phone. 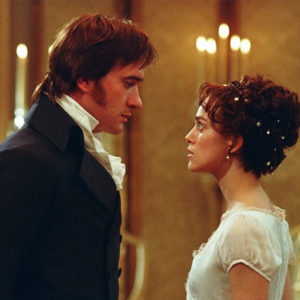 The true story behind Mr. Darcy’s infamous hand flex. Perhaps one of Austen fans’ favorite moments on film comes from an early scene in the 2005 film adaptation of Pride and Prejudice....
© LitHub
Back to top