This week on Book Dreams, Megan Rosenbloom—author of Dark Archives: A Librarian’s Investigation into the Science and History of Books Bound in Human Skin—delves into the who, what, when, where, and, most importantly, why of books bound in human skin. She talks with Julie and Eve about how the desensitization and clinical distancing of doctors’ attitudes towards patients during the 19th century led to an increase in the production of books bound in human skin; how public hangings and dissections were used to dissuade people from becoming criminals; and how our understanding of societal ills like political propaganda and systemic racism can be deepened by the study of books bound in human skin.

Julie: I feel the need to point out to everyone that this book is a weirdly fun read. I did not expect that. As part of the Anthropodermic Book Project, Megan is traveling from place to place taking tiny samples from books that are reputed to be bound in human skin. She takes guesses about whether she thinks they actually are bound in human skin and she lets us know the results and assesses what all of this means historically.

Eve: And because of that approach, this isn’t just a fun read; it’s also a really important one. Because what Megan learns, whether a book is actually covered in human skin or is just reported to be, tells us quite a lot about very mainstream and societally devastating problems that we’ve long faced. Here’s just one example:

As part of her travels, Megan tested a piece of parchment that was inscribed with a message purportedly from one Luke Swetland and dated 1779. There was an actual Luke Swetland who was kidnapped by a Native American tribe in 1778, and who escaped and returned to his family in 1779. The message on the parchment claimed that it was the skin of a white man scalped by Native Americans and that Native Americans used skin like this for currency.

Megan writes, “Did Swetland write this desperate note on the preserved skin of another captive? I had my doubts. The note’s date struck me as too close to the date when he reunited with his family for it to have been written under immediate threat of torture. The spelling also made me a bit suspicious. Although the note was written right around the time that American English coalesced into standard agreed-upon spellings, Swetland’s grandson claimed he was an avid reader. He probably would have had a standard spelling of his own last name, though even that is not 100 percent certain given the time period.” Megan goes on to say, “Why would someone lie about making something of human skin? In short, money. The scarcity of an object made from human skin and the attendant morbid curiosity drive its value.” Megan also points out that scholars have argued that the captivity narrative helped demonize Native Americans and justify manifest destiny to the West.

Julie: In this instance Megan confirmed that the parchment was not in fact made from human skin, it was instead cow hide, and that this was one of many examples of racism that were used to justify the mass slaughter of Native Americans.

Eve: So you can see how this topic is much more than morbid curiosity.

Megan Rosenbloom is a librarian with a research interest in the history of medicine and rare books. Now the collection strategies librarian at UCLA Library in Los Angeles, she was previously a medical librarian and before that, a journalist. She is obituary editor of the Journal of the Medical Library Association and president of the Southern California Society for the History of Medicine. She is a member of the Anthropodermic Book Project, a multi-disciplinary team scientifically testing alleged human skin books around the world to verify their human origin. She is also the co-founder and director of the Death Salon, the event arm of the Order of the Good Death, and is a leader in the Death Positive movement.

Believe It by Jamie Kern Lima, Read by the Author 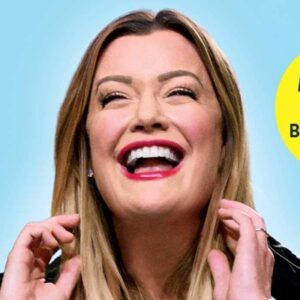 Believe It by Jamie Kern Lima, Read by the Author