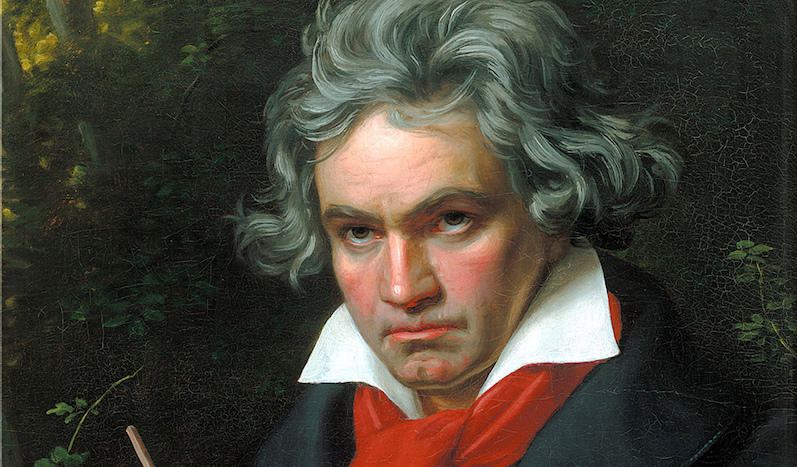 I met Beethoven at an Italian restaurant on the Upper West Side of Manhattan. He was looking for patrons for his orchestra. I needed a muse. I was working on my first novel, The Woman in the Moonlight, about the deaf composer’s volatile love affair with Countess Julie Guicciardi. As a longtime journalist, I was accustomed to quoting living people, not inventing dialogue for dead ones. When a friend offered to introduce me to a conductor who specialized in instruments from Beethoven’s time, I thought, How perfect! Perhaps I could interview him and gain insight into a musician’s life.

When the maestro walked into the restaurant, I noted that he had Beethoven’s wild gray hair and commanding presence. It was too soon to tell if he had the composer’s irascible personality, but after he launched into a diatribe about his “incompetent” staff, I was hopeful. Like Beethoven, he could also be charming; he was smart, funny, and single-minded in his devotion to music. During our three-hour lunch, he explained that he’d been divorced for many years. When I asked what he missed most about married life, he replied, “My Steinway.”

When the maestro walked into the restaurant, I noted that he had Beethoven’s wild gray hair and commanding presence.

The next day, he invited me to a patron concert at a private club. The ornate room evoked the Viennese salons where Beethoven had once thrilled the nobility with his fiery improvisations. I imagined the women in diaphanous Empire-waisted gowns, the men in morning coats and white cravats. In the middle of the program, a harpist performed the Moonlight Sonata.

The maestro later confessed that a tear had dripped down his cheek; he explained that it spoke to his “permanent connection to the power of musical vibrations,” adding that we were the “sum of vibrations through the ages.” This was good news. If we vibrated long enough, soon I’d be vibrating with Beethoven himself.

Every morning before I started to write, I went on the maestro’s website. It functioned as a portal to the 19th century, with Vienna just a click away. Now that I had a Beethoven surrogate, I no longer felt tethered to the facts. I could indulge my imagination. My writing was going so well that I was ready to take a break.

My husband and I were in Tuscany when my muse returned unbidden. He complained in an email that his new staff was sending out information filled with grammatical errors. I worried that he was confusing our roles. I was the writer. He was the muse. Why fret over grammar? I told him that I didn’t think it wise to let anything distract from his upcoming concerts.

That night, I had a dream that I wrote a musical composition. It was a blend of Keith Jarrett’s “Bridge of Light”—the maestro had conducted it—and parts of Beethoven’s String Quartet No. 12 in E flat major. It felt like a real breakthrough. I’d finally built a bridge to the past.

I thought my muse might be interested, but he never replied to my email. He did, however, get back to me once I returned to New York. He was angry that I wasn’t more sympathetic to his staff problems. When I accused him of getting overly dramatic, he reminded me that “music is the most dramatic of all the arts!” Julie, my narrator, was suffering from Beethoven’s difficult temperament, and now I was suffering from the maestro’s.

We hadn’t spent any time discussing Beethoven, so I wanted to set up an official interview to get his thoughts. He was impossible to pin down but finally squeezed me in. While I knew Beethoven’s biography, the maestro knew his music so intimately that his knowledge almost transcended words. I had a hard time following his arcane references. When I reviewed my notes, among the few things I’d written down was “Beethoven = angel hair filigree.” I had no idea what it meant.

During the interview, I’d asked him to speculate on Julie’s reaction upon hearing Beethoven play for the first time. He was then the most exciting piano virtuoso in Vienna, with a style that veered from ferocity to tenderness. His playing was considered too agitating for ladies with a delicate constitution. In my book, Julie fainted. Was this realistic? He never really answered, but in a follow-up email, he offered an example from his own life, telling me that women were attracted to him because of “the music thing.” He went on: “You know, the road ladies.”

Was he comparing my narrator to a groupie? Did he think I was a groupie too? We got into a heated text spat. He later wrote that given the pressure he faced, he wanted only supportive people around him. I knew what that meant. The maestro, my muse, was banning me from Lincoln Center.

I quickly apologized. He was planning to conduct Beethoven’s 8th Symphony and I couldn’t miss it. The maestro was charismatic on the podium. Puffing out his chest and extending his long arms, he seemed to enfold the entire orchestra in his embrace. Listening to the symphony on period instruments allowed me to hear what Julie heard, giving me a deeper understanding of the sound world of the 19th century.

Feeling more positive, I invited the maestro to attend an arts gala. I’d arranged the table so he could sit next to a potential patron. He ignored me the entire night. Beethoven would have done the same thing, so I was trying to work it into the novel, but life was now overtaking art. When I told the maestro that I found his behavior rude, he promised to talk to me at the party after his next concert. We had a lovely conversation, and I became a patron. In my book, Beethoven had just had a fight with his largest benefactor and needed money. I felt that I was helping both men out.

Afterward, the maestro said he needed a break—from me. Dealing with him was like having whiplash. But wasn’t that the essence of Beethoven’s music—the sudden rhythmic changes, the thunderous climaxes, the sheer outsize drama? A month later, after another spat, the maestro refused to reply to several of my texts and I let it rest. Muses can’t be summoned. They emerge when you least expect it.

One day, he suddenly emailed to say that he’d caught me in an HBO documentary and it was as if my ghost had invaded his bedroom. In my book, Julie had just returned from Vienna after a long separation from Beethoven. “I thought you were Eine geist,” I had him say.

After the maestro conducted a thrilling rendition of Beethoven’s Eroica, he invited me to attend a musical event—“Epilogues & Epitaphs”—at Brooklyn’s Greenwood Cemetery. I had no desire to spend a hot summer evening in a crypt, but as I was preparing to bury Beethoven, I chalked it up to more research. After drinking a plastic thimble of bourbon in a mausoleum, we trekked up the hill to the catacomb. The concert was pleasant, but I couldn’t help noticing the names of the people entombed around me. It felt like an ending.

But there was an epilogue. I attended the maestro’s gala at the same time I was reworking a critical ballroom scene. The maestro had promised to dance with me, but when Julie waltzed with Beethoven it ended in tragedy. I was nervous, but I didn’t have to worry. During the cocktail hour, the maestro was so engaged with prospective patrons that he waltzed right past me without saying hello.

During the past year, we’d talked about collaborating on something for Beethoven’s 250th anniversary. This spring we met to discuss plans. His upcoming schedule was packed with Beethoven events. Over the years, I’d grown fond of his orchestra and was excited about the concerts. Unlike our first lunch, however, there was an elegiac tone to the conversation. When we said goodbye, he held out his arms and drew me in the way he did his musicians. The following week, he conducted the very last concert at Lincoln Center before COVID-19 shut it down.

Today, I no longer live in the 19th century. The Woman in the Moonlight is finished and about to be published. Did the maestro influence my creative process? He certainly helped to bring Beethoven, with all his Sturm und Drang, alive. But ultimately, the effect was more ineffable than that. 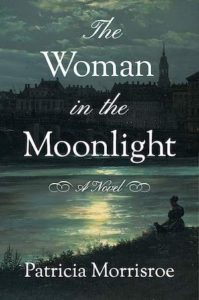 The Woman in the Moonlight by Patricia Morrisroe is available now from Little A Publishing.

Patricia Morrisroe is the author of Mapplethorpe: A Biography, Wide Awake: A Memoir of Insomnia, and 9 ½ Narrow: My Life in Shoes. She was a contributing editor at New York magazine and has written for many other publications, including Vanity Fair, the New York Times, Vogue, the London Sunday Times Magazine, Travel + Leisure, and Departures. The Woman in the Moonlight is her first novel.

Obsession and Desire in an Ancient Assyrian Library