In Conversation with Sharmaine Lovegrove, Founder of Dialogue Books

Mainstream British publishing is changing—slowly—thanks to tireless individuals who continue to question the status quo, and who prove, by their actions, that just because things have been done a certain way forever it doesn’t mean they have to stay the same. One of the people who has infused the industry with dynamism and change is Sharmaine Lovegrove, a former entrepreneur who’s worked on all sides of the industry, and who has recently launched her own imprint, Dialogue Books (part of Little, Brown), with a focus on telling stories that have often been excluded by traditional publishing.

After Lovegrove left home at 16, she worked in several bookstores (most readers who know London a little will have been to the second-hand stalls under Waterloo Bridge, the legendary independent bookseller Foyles, and the London Review of Books bookshop). After university, she got a job as a publicist, though not for a publishing company, as they all rejected her applications—she’d later find out everyone who did land those jobs either went to Oxbridge or had family connections. Then, after she was turned down for a loan to open a bookshop on Broadway Market (a road where there are now three), she left the UK and opened Berlin’s first English-language shop; Lovegrove went on to co-found a scouting company, and became literary editor for Elle UK. Finally, in 2017, she started her own imprint.

A recent survey of more than 1,000 people working in UK publishing found that 90 percent were white; less than a hundred out of the thousands of books published in the UK last year were by non-white authors. Despite those terrible numbers, it’s hard not to feel that change is coming: we’ve always known that the demand from readers was there, and that the writers were writing; now, thankfully, more and more people are working to make and distribute the books that connect them. I recently exchanged emails with Lovegrove about her new venture.

Marta Bausells: Last time we checked in, you were gearing up to launch Dialogue Books’s first official title (The Leavers by Lisa Ko, out now)—and you had not only your exciting 2018 list, but also your 2019 list almost ready. Congratulations on a fantastic first ten months! What are your hopes and plans for the rest of this year?

Sharmaine Lovegrove: Thank you! It has a been a whirlwind but that’s natural as someone who has been working as an entrepreneur for over a decade. We run things at a different pace! For the next two years of publishing I hope that readers can be transported to somewhere that makes them consider the world from a different perspective, or see echoes of their own lives in the pages of our books. Dialogue publishes across fiction, non-fiction, commercial and literary so there is something for everyone on our list.

MB: Dialogue publishes voices that are often excluded from the mainstream, by and for LGBTQI+, disabled, WOC and working-class communities, across literary genres and both in the UK and (soon) the States. You’re interested in “books telling stories of our time.” What do you look for in submissions?

SL: I am interested in stories that concern politics and social justice, the everyday and the journey. In terms of unheard voices my list aims to be inclusive which is what sets it apart from most lists in this country where only one type of voice is given space. By being varied and wide-ranging I actually don’t exclude anyone. We have white middle class writers and gay working class black writers, everyone is welcome at Dialogue as long as the work gives voice to a world that is original, culturally expansive, and is brilliantly written.

MB: Inclusion is at the core of your mission with Dialogue, and you’re being rightly celebrated as one of the main people spearheading change in British publishing. But I’m curious as to what the view is from the inside—you recently wrote in the Observer about how frustrating it is to still be the only black person in your division, for your race to be so defining of your work, and how you hated the feeling that some people interpreted your mere presence as progress. Could you talk about the difference between inclusivity and tokenism—as it pertains to British publishing today?

SL: I am no longer the only black person in my division as Sphere Fiction and Dialogue recently hired a fantastic editorial assistant. It was a rigorous process with 668 applicants (the most applicants ever for Hachette) and he got there because he was the best.

Being in the room and asking slightly different questions and, most of all, looking for someone who will be a brilliant editor in his own right: This is the difference of tokenism to inclusivity. By assessing the barriers and then taking them down, you can see a range of people who will fit because they are right for the job you have created. It’s as simple as no longer having an idea of what is the right fit, understanding much of the job is learning and that anyone can do that. Often people are too busy and want someone who can just do the job. By changing entry level expectations you can find people who have little or no experience but who bring something different to the table that will inform how you publish for the better.

That exchange—show us your world and we’ll show you ours—is both powerful and opens up the job market to a huge range of people.

MB: You have the unique perspective of someone who’s been on almost all sides of the trade: an indie bookseller, a press officer, a scout, a literary editor in the media, a publisher. Has anything caught you by surprise in founding Dialogue?

SL: The biggest surprise is how desk-based my job is now and how little we engage with bookshops and readers on a daily basis. I miss bookshops but still spend a large percentage of my salary on books. I try to do lots of author panels in bookshops so I have an excuse to meet readers. Just today I was in a bookshop at the airport and convinced two readers to buy The Party by Elizabeth Day as I am making my way to a panel in Berlin. I am addicted to the boxfresh experience of buying a new book—oh the possibilities! My vice is hearing how much someone loved something I’ve recommended. How we talk about stories and characters is the best type of cultural exchange.

MB: Our American readers might not be aware of how shockingly homogenous, from both a race and class point of view, the UK industry is. The appetite for all kinds of voices is there, but change has to be structural. You’ve talked about how white people need to start owning their entitlement—not just their privilege. The industry should probably do the same, and that starts with hiring. How can we, at all levels in the industry, combat the the status quo?

SL: My example earlier touches upon that. People shouldn’t be shamed into being inclusive. If you literally cannot think outside of your experience, should you be hiring? Should you be an editor? Should you be responsible for publicizing and marketing books when you cannot think about everyone in our society? I hope I don’t just think of these things because I am a black woman but because I am a good, open-minded individual for whom being liberal is a core trait and equality is a human right.

MB: Do you think publishers who don’t have a diverse workforce in ten years, that reflects society, will have problems to surviving?

SL: Everyone has to change—adapt and thrive in order to survive. I have zero time for people who don’t understand this. I don’t want to spend my time convincing people of the cultural and moral imperative—I have too much else to do. If you don’t want your business to have the broadest reach  then good luck!

MB: You wrote this piece I’ve mentioned, in the Observer, about your own route into publishing. I found it so moving, especially how your love of books and stories propelled you forward—and how your grandmother influenced you. What would you tell people who hope to work in publishing, but don’t have those family connections or Oxbridge background?

SL: We need you! If we don’t use your skills and talents then we will decline. Skill yourself up in a myriad of different ways, we need lots of transferable skills. Dig deep and show you want this (go and work in a bookshop whilst you are waiting for your break). Your passion will win out, hold tight.

MB: And if you could talk to baby Sharmaine at 16, having just left home, what would you tell her?

SL: What I did tell baby Sharmaine is you are good enough, you have rights, stay true and be your best self.

MB: I would love to finish by asking you about how different London was in the 1980s and 90s versus now. I didn’t know that London, and it sounds like a beautiful hazy dream to me.

SL: Oh London, my first love, my forever home! London in the 90s is very similar to Bristol [where Lovegrove has recently relocated] now, which is similar to Berlin or Hamburg. It was lively—not busy—but it had energy, possibility, and was fearless and proud. Now it just feels like an extension of the home counties with people “heads down,” going to work and struggling to survive, spending too much on basics such as renting and food.

This is because London swallowed the capitalism pill and people moved for work rather than for lifestyle. People move for a job, not to create—and now, people are moving out to create. Although London has always had a shifting population, seeing the artists go is a huge blow to the cultural scene, though great for the rest of the country. The secret, I realized, is that other cities like Manchester, Liverpool, Birmingham and Bristol are all cosmopolitan and are not lacking in what London has in terms of food and culture, but the scale allows for a better quality of life and a less segregated existence. 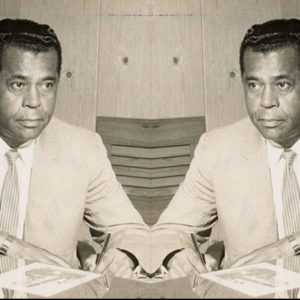 “Bourdain used his tremendous platform to explain to his audience how their own lives were entangled with those of other...
© LitHub
Back to top