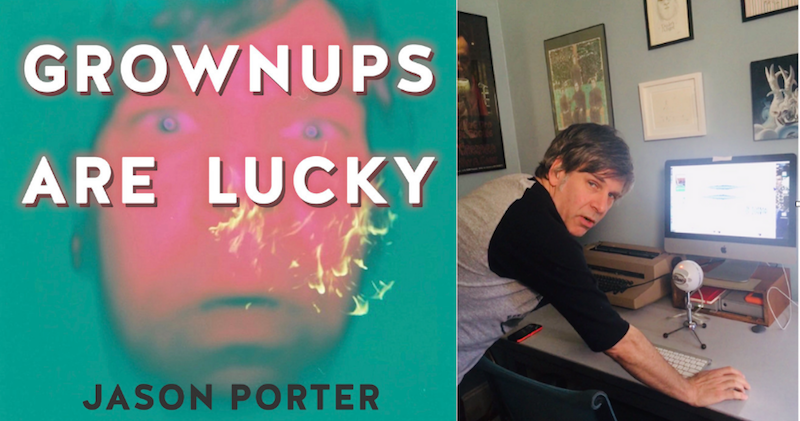 Jason Porter: Find a Hobby, Die, or Keep Doing This

Jason Porter’s podcast recording studio is an intimate space, one shade short of robin’s egg blue, where the walls are decked with collectibles and art made by friends. Four monks stare blankly from a crayon-green lawn; a hybrid creature fights from a watery hell; and a film poster advertising The Killing of A Chinese Bookie bares the deceptively unassuming face of Timothy Carey, an actor known for characters roiling with subtext, sipping from a cup of tea. The poster is signed. Porter’s characters also tend to roil. Porter does, too. Raymond Champs, the hilariously mournful narrator of his first novel, Why Are You So Sad? is convinced the world is depressed, so he devises a survey about sadness. And distributes it. At work. Champs can’t help but reveal his disquiet, to his co-workers, to his wife, with presumptive questions like:

Do you think people will remember you after you die?
For how long?
Do you think we need more sports?

On Porter’s desk rests a microphone aesthetically vintage and futuristic; a widescreen computer; and a squat electronic typewriter, putty-colored, the size of several encyclopedias stacked. Behind us stands a bookshelf, packed with novels, including his most recent purchase, Jerzy, by Jerome Charyn.

I asked him how it was.

He said, “I don’t know, yet. Michael told me to read it. The man knows books.”

I’d forgotten. I should start again.

I have talked with Porter before, but not like this. I interviewed him once, over email, on the occasion of his first novel. I’d talked with him informally several times, after. But since the start of his latest project, the wonderfully strange and very funny fiction podcast Grownups Are Lucky, I have wanted to talk again. The show is perfectly suited to those (like me) with shortening attention spans, and those (also me) endlessly interested in the possibilities of fiction. In other words: do you like stories? I mean really short stories? The weekly diorama-like stories featured on Grown Ups Are Lucky are 250 words long (one page), briefly introduced by Porter, followed by a patient reading, and finished with comically unnerving end-credits. The entire show is rarely more than four and a half minutes long. This is a remarkable feat, and often approximates an aural conflation of Lydia Davis’ philosophical brevity, Diane Williams’ brilliant questioning wit, and George Saunders delightfully inventive gallows humor. The form, however, is his.

I wanted to know more.

We met first in a place mutually loved, at the beloved speakeasy-bookstore Brazenhead Books. There, while drinking cool wine poured from the kitchen bar, sitting on an orange sofa, beside a large and immaculately detailed model Ferris wheel, we asked Michael, the proprietor, what we should read: Charyn’s Jerzy for Porter; The Collected Stories of Leonard Michaels for me.

I turned the conversation to Grown Ups Are Lucky.

Porter said, “If I recall correctly the title was pulled from a caption in a Family Circus comic strip. I wanted to use it as the title for a song for a band I was in, a long time ago. I had been fascinated by that strip for a while because it was rarely funny, and weirdly creepy, and hard to tell what the joke was meant to be. When I was in college I had this big plan to cut it out everyday and mail it anonymously to Newt Gingrich because like the comic strip I found him unfunny and creepy. But I never followed through on the project, which was probably wise, as the FBI might have started a file. They may have. But I also liked the sad irony of the title, having been desperate to be a grownup when I was a child, only to find it’s not all it’s cracked up to be.”

This response demands a few observations.

It should be said Porter has a rich voice, warm, generous, melancholic. In person. And on podcast. This matters.

His stories are as welcome as they are strange, and he’s always telling stories. The response above is but ninety words short of an episode.

Recordings from the rest of the night, populated by Michael, Jason, myself, and two Australian expatriates, quickly fade into not wholly relevant conversation about the crooked hype of shampoo, and Robert Musil’s The Man Without Qualities (Michael had just finished it). At some point, Jason and I made plans to meet for Mexican food and to see his studio.

We’re so passive with our thoughts most of the time. Here I spit them out and arrange them. Like arranging flowers.

I have listened to every episode of Grownups Are Lucky (so far), and like any exceptional collection it spans the spectrum of human experience. The stories embrace realism, absurdism, humor, and misery, often at the very same time. Actually, they’re always funny. But their great mean is also their medium: Porter’s voice. In “Drift,” “a baby reaches down from a daydream…” In “Bend,” “A wind delights itself in not having a self. It blows through your fingers, into my hair, stealing a hat from an old lady, animating a flag, bending grass…” Two stories from the show were featured in Electric Literature’s series The Commuter, and a ten-story suite was published in The Maine Review, and Epiphany will be featuring Porter in their Spring 2019 issue. In a recent, uncanny favorite, “Jump,” someone spies an animal sipping from lakeside, and realizes: “Humans will be my death.”

The line put a knot in my throat.

After seeing the studio, we had shrimp tacos and tall waters.

I asked, “How many will you write?”

“250 words per story,” he said. “250 stories. If I write one a week, that’s another three years. I don’t enjoy the math. Of course, if I stop, I might feel completely rudderless.

“How do you think of the podcast craft-wise?” I asked.

“I started writing these after I finished my first novel, panicked I would never attempt another. The idea was a prompt. My minimum requirement as a ‘writer’ was to write 250 words every day, without objective, or judgment. This goes on until death, or until I get a hobby. The key is continuing, and contributing to the ongoing file of nonsense, and not getting discouraged when they’re mostly uninspired junk. And I have to say sticking to an exact word count is an excellent exercise for editing your own work, and for digging deeper. I enjoyed Twitter at its start for that same challenge. Having a rigid count forces tough decisions, teaches you about clarity, and economy.”

We regretted our waters.

“There is the question of whether he affects the content, and if he affects the impulse to publish stories in this manner. As for the latter, time feels like it’s moving faster. This would be true even if some other jackass were in the White House, and getting a foothold on the present was already difficult given technological shifts. But Trump compounds all of this, as our government erodes before our eyes. We are the animal in the road, transfixed by headlights.

Tyranny is about to mow us down. In these conditions it does feel advantageous to put something out there within the week. It’s an added risk because on the whole I think work benefits from having time to marinate, cultivate, refine, but it’s hard to imagine waiting years to release a story about Brett Kavanaugh. As for the question of whether he affects the content, I’m sure he does. I try to be careful not to make everything political because that wasn’t the initial goal of the project, and the whole thing might turn into a serialized rant, but I also don’t resist those urges entirely. If nothing else it’s a good mental exercise. We’re so passive with our thoughts most of the time. Here I spit them out and arrange them. Like arranging flowers. Though that sounds more relaxing. I strive to make it as relaxing as arranging flowers.”

I saw you jump. Your back and front legs took turns. Down and forward, then back, legs up and out, splashing. Extra work because you lacked experience. Like you were trying to take your socks off without using your hands, which is something you would do since you don’t have hands. You have hoofs, and your mother let you wander. I was thinking about your mother because a local had warned me. He said mothers like yours would run me up a tree. Especially this time of year. But I think that was a bigger issue when you were younger. Your mother let you wander off a little. She wanted you to know about things. I like that about her, though she still scared me. She was all the way over there, sucking up the lake. But she also thought about me, on the shore, finishing my sandwich, slowly taking my camera out of its bag, being careful not to broadcast the sound of velcro, getting ready to take pictures. The pictures are the worst thing to do. They diminish the power. The surprise of your mother making a loud animal noise as you entered the mountain lake, a reminder that life is wild. I thought about your life, jealous. A vegetarian diet. Time in the stream. I wondered how few years you might live. I thought about your death, which was sad; your heart collapses or a wolf attacks. I thought about my death: Humans will be my death.

Scott Cheshire is the author of High as the Horses' Bridles (Henry Holt). His work has been published in AGNI, Electric Literature, Guernica, Harper’s, One Story, and the Picador Book of Men. He lives in Los Angeles.

Richard Blanco: 'I Don't Subscribe to the Notion of Writer's Block' 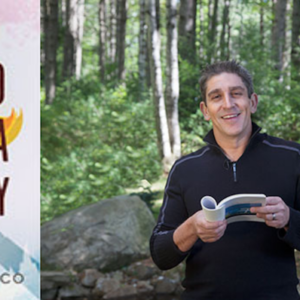 Richard Blanco: 'I Don't Subscribe to the Notion of Writer's Block'

Richard Blanco's new poetry collection How to Love a Country is now available from Beacon Press. * Who do you most wish...
© LitHub
Back to top
Loading Comments...