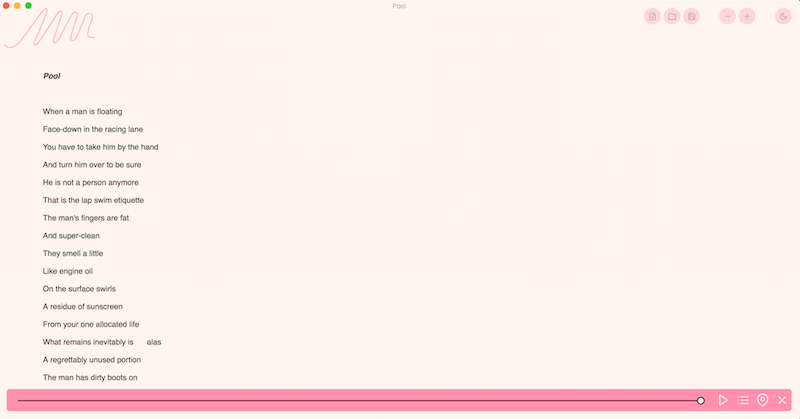 Meet Midst, a new writing tool that reveals the editing process behind poems.

As readers, we’re obsessed with the creative process: entire podcasts, interviews, and courses are dedicated to how writers come up with their ideas and write. But here’s a trade secret: more often than not, the genesis of any given idea is a mystery, even to the writer in question. This is true for poet Annelyse Gelman, author of Everyone I Love Is a Stranger to Someone and POOL. “Usually, if the poem I’m working on is going well, I get into an intensely focused space, and as soon as I finish it, I immediately think, How the hell did I do that? I’m never going to be able to do that again,” she explained. “There’s this post-flow-state amnesia—it’s like waking up from a dream.”

Gelman wanted to understand her own process more clearly—particularly when she started her MFA at the University of Texas at Austin’s Michener Center for Writers and discovered that no one was discussing how they arrived at the work they brought to class. All the rigorous discussion of process in workshop started after writers solidified their first full draft; every step before that was left mysterious and untouched.

This frustration gave Gelman the idea for Midst, a new word processor that tracks writers’ changes as they make them, letting them (as well as their readers) see exactly how their first draft was written. Once a writer finishes their piece, they can rewind to see previous versions of their document—something like a a poetic timelapse.

In 2018, Gelman teamed up with the software developer and sound designer Jason Gillis-Grier to make Midst a reality. The pair were so excited by the idea that they managed to carve out time between Gelman’s MFA courseload and Gillis-Grier’s full-time work as a programmer, muscling through late nights and technical dead-ends. This collaboration yielded added functionality: now not only can a Midst poet rewind their work to see where they’ve been, but they can re-enter the document at any point on its timeline and keep writing from there—or drag an old section into the “present” of their poem, making editing easy.

The Midst app is still technically in beta; the project launches on February 9th. But currently viewable at Midst’s website is Midst’s Pilot Issue, a 2019 collection featuring poems that solicited poets wrote using the Midst software. Readers drag a cursor to rewind the poem and see the changes poets made from inception to “completion.” Not only is the issue sleek and user-friendly (and the pink color scheme is a cute distinguishing touch), but it’s a complete reframing of the work, which in any other journal would stand alone devoid of context. It’s exciting to see the discoveries embedded in the contributors’ processes, like the invention of the ending in Jackson Holbert’s “Poem About Judges” and the format shift in Hedgie Choi’s “I Get It, Phases.”

The Pilot Issue is expected to be the first of several Midst issues. The second issue will be released on February 9th for Midst’s formal launch, with a new cohort of contributing poets including Jos Charles, Imani Elizabeth Jackson, and Zach Schomberg. But that’s not the ultimate goal, says Gelman; eventually, she hopes anyone will be able to create a Midst profile and directly upload their own work, like Neutral Spaces meets Vimeo.

Midst is intuitively useful for writers who want to learn from other writers’ processes, as well as who want to track their own process more carefully. But Gelman believes Midst has a larger reach than that: it has the possibility to invite readers into an art form they previously found inaccessible. “One of my main hopes for Midst is definitely for folks who don’t think they understand poetry, or who don’t think they can write it, to realize that it’s not magic,” says Gelman. “Everyone does it differently, and there is no “right” or “wrong” way to do it . . . Even for someone with absolutely no interest in writing, I think witnessing that craft even once can make the reading experience richer and more exciting.”