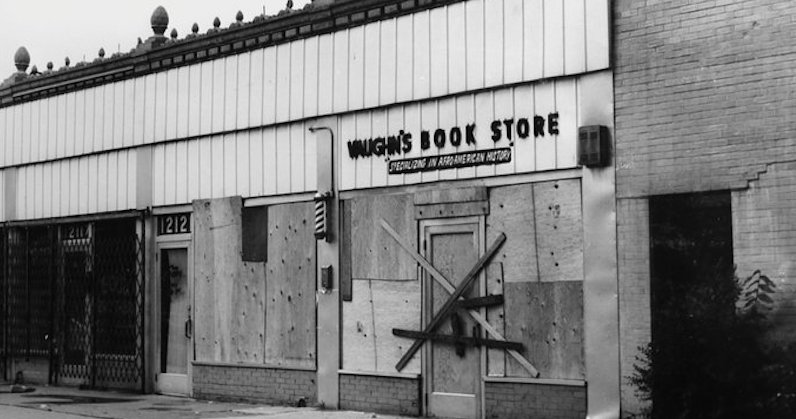 It was my best case scenario. Not only did Edward Vaughn pick up the phone, but he was willing and eager to speak. At 85 years old, he had way more energy than me, 60 years his junior, when I called him earlier this week. (An unfortunate cocktail of technological failure and fanboyish unpreparedness means no new quotes from Vaughn here).

I rang Ed Vaughn for reasons mostly unconnected from what historians will remember him for: he served as a former state representative in Michigan, an executive assistant to Detroit’s first Black mayor, and was one of the first African-Americans to open his own bookstore as the era of Black Power (or the age of Black consciousness) burgeoned in the 1960s.

Two years ago today, the history of Vaughn’s Bookstore in Detroit, which operated in various iterations from the mid-1960s until its closure in the early ’90s, was the subject of a story in a local paper.

Many major American cities around that time didn’t have bookstores that focused heavily on African diasporic cultures and histories. Vaughn had migrated from Alabama to Detroit in 1956, looking for work, and found it in a restaurant before stints with the postal service and Army.

Not long after he was discharged, Vaughn searched for a book in Detroit and had trouble finding it: Ralph Ginzburg’s 100 Years of Lynchings (1962), which assembled a range of American newspaper articles about racial violence. Vaughn’s friends at the post office wanted to read it, too, and other literature about African-American history, so he started ordering books and selling them out of his trunk.

He saw an impending Black philosophical and aesthetic shift that veered from the contemporaneous Civil Rights movement, and wanted to prepare. Buoyed by the support of local Black nationalist media figures like the Cleage brothers (Henry and Albert) and the Henry brothers (Milton and Richard), Vaughn co-founded his bookstore with Polly Ross.

(I was calling Vaughn to ask about his involvement with the Shrine of the Black Madonna in Detroit, the mother church of the Black Christian Nationalist movement inaugurated by Albert Cleage. Would you believe me if I said Ed Vaughn also played a key role in propelling the Black Arts Movement to international fame? A story for another time.)

In a 1989 interview for the Eyes on the Prize documentary series, Vaughn explained the overarching project he and other Black leaders were pursuing:

I think what we were trying to say to them at that time was that we needed to control the community in which we lived, it was kind of sad that we lived in a community where we did not control the social, economic, and political conditions of the community.

Vaughn’s had signs and banners with slogans like “Think Black” and “Knowledge Is the Key to a Better Tomorrow!” The store suffered extensive damage during the 1967 summer rebellion. Though most eyewitnesses recanted their statements to the FBI, Vaughn and other nearby residents suspected the police of launching a late-night raid that ended in a fire and flood.

Fortunately, Detroit’s position in the Black Power movement was the focus of much international attention. Vaughn’s received many book donations from around the world, especially China, as news spread about the book burnings in Detroit. Today, Ed Vaughn’s four children are businesses owners in their own right, running a barbershop, hair salon, and framing business in Atlanta and Detroit.

I think Vaughn would agree with Bernadine Evaristo’s assessment that the publishing industry “hasn’t changed fast enough to become more inclusive.” Discussions about placing BIPOC publishing professionals in positions of power can be grounded in the experiences of people like Vaughn, and should include people like him.

Buying books by and about Black people is good, keep doing it. Question is what are we going to do after we put them back on our shelves?