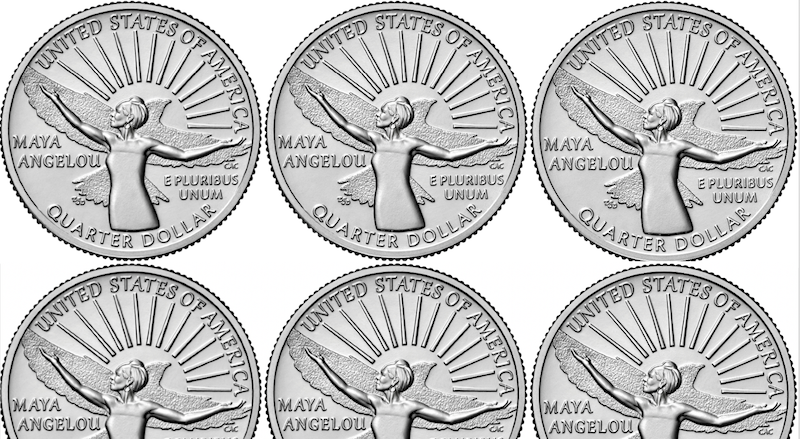 Maya Angelou is the first Black woman to appear on the U.S. quarter.

Long-awaited news: the U.S. Mint has announced they have officially begun shipping a new quarter honoring Maya Angelou. Angelou is seen on the tails side of the quarter; the image, designed by Emily Damstra and sculpted by Craig A. Campbell, shows Angelou with uplifted arms in front of a bird in flight and rising sun—“inspired by her poetry,” the U.S. Mint says, “and symbolic of the way she lived.” Angelou is the first Black woman to appear on the U.S. quarter.

The quarter depicting Angelou is the first quarter of the American Women Quarters Program, which begins this year and continues through 2025. The program features coins with tails designs that highlight trailblazing American women—besides Angelou, the additional 2022 honorees are astronaut Dr. Sally Ride; politician and suffragist Nina Otero-Warren; actress Anna May Wong; and Wilma Mankiller, first female principal chief of the Cherokee Nation.

The American Women Quarters Program was made possible by the Circulating Collectible Coin Redesign Act of 2020, which passed in January 2021 and is exactly what it sounds like. “As a leader in the civil rights movement, poet laureate, college professor, Broadway actress, dancer, and the first female African American cable car conductor in San Francisco, Maya Angelou’s brilliance and artistry inspired generations of Americans,” said Representative Barbara Lee (D-CA), House sponsor of the bill. “I will forever cherish the private moments I had the privilege to share with Maya, from talking in her living room as sisters to her invaluable counsel throughout the challenges I faced as a Black woman in elected office. I am proud to have led this effort to honor these phenomenal women, who more often than not are overlooked in our country’s telling of history. If you find yourself holding a Maya Angelou quarter, may you be reminded of her words, ‘Be certain that you do not die without having done something wonderful for humanity.’”