Max Porter’s debut, Grief is the Thing With Feathers (Graywolf Press), a work that exists in a liminal space between poetry and fiction, is as gorgeous as it is singular. I read it in a single sitting and have been haunted by its hypnotic rhythm and vulnerability ever since. Following its UK release in 2015, it was shortlisted for the Guardian First Book Award, the Goldsmiths Prize, and the Dylan Thomas Prize.

Just as it resists categorizations of genre, a plot summary is also inadequate, although I can say the story centers on a widower, his two sons, and a giant crow—the transfiguration of their grief, which has become an unwelcome visitor in their home. It is an unpredictable and moving work of art.

I first met Max in London at Granta Books, where he is an editor, but we crossed paths again at the 2016 Adelaide Writers Week, where I was blown away by his reading style, his kindness, and his penchant for an Aperol spritz. We emailed about his work a few weeks later.

Catherine Lacey: I have this feeling more and more that writing a book should be a side-effect of a life, a consequence of one’s experiences and curiosities instead of one’s primary goal. I know a little about your varied background, but can you tell me a little more about how you produced Grief is the Thing With Feathers?

Max Porter: I think that feeling is the right feeling. I had the luxury, when writing this book, of having no readership in mind, no contractual obligations, no ambition as such to even publish it, so I was able to be completely focused on what I wanted it to be. I guess I’m suggesting a deep unease with the economic imperative of a writer delivering into a system. And so I am reminiscing about the conditions of writing a debut, whereby none of those pressures exist. This book spilled out of me in an attempt to answer some questions about parenting, childhood, mourning, form and storytelling. If getting it published had been my primary goal I think a nasty fraudulence would have unbalanced the thing from the start.

But to answer your question, I put my kids to sleep, I cooked a meal for my beloved, and I sat with this old laptop (no Internet connection, which seems vital in retrospect) and I got into a good place. I’m not sure I buy into any ideas about creative flow, but I certainly managed to shut out the noise of my job and found I was really listening to the three voices I was writing. I also had a physical support network of things I’d been collecting; scraps of paper, sketches and notes. If in doubt, I would draw. And then I would log on to the Internet and send the pieces to myself as gmail drafts. This way, back and forth over a few months, I assembled it. Truth be told I was a little bored of some of the novels I was reading, and hoping to re-engage myself by collapsing together poetry, children’s books, plays, essays and so on. In that respect the book is a self-portrait of my reading life, of moving between forms, of actively seeking hybridity. It turns me on, that movement. And, even more truthfully, I was angry at some bullshit family stuff and wanted to write a character that brought some heavy truths in a loving way, with play, with violence, with energy and a long memory.

CL: I love the idea of a book being a “self-portrait of [one’s] reading life.” Were you reading a lot of Ted Hughes at the time or is that deep in your reading DNA at this point?

MP: I actually stopped reading Hughes, because it would have been disastrous to have his voice affecting the Crow character in my book. I was trying to write about a reader’s obsession becoming manifest, so yes, I had been previously been sufficiently obsessed to attempt this! Hughes is deep in my DNA, especially his letters and his prose. Dickinson, Carson, Hoban, David Jones, Basil Bunting, they all are sufficiently imbedded in me now that I would consider them comparably part of the DNA. Not influences so much as permission-giving fabric of myself as reader and writer.

CL: Listening to you read your work, I was really struck by your style, how you seemed to have a deep, sonic understanding of each work and a natural sense of performance. So often it seems a writer struggles with the staged reading. What goes into your approach?

MP: That’s nice of you to say. I have to honor the musical nature of the book. Next time I’ll go for nasal monotone. This book is especially concerned with the interplay between three voices when one of those voices is running violently amok and flinging literary history and puns and allusion all over the place with an aggressive healing agenda. It would be a shame not to read Crow like he’d want to be read. He’s a show off with a thousand years of symbolic superstardom to play with, so I have to channel that a bit. It’s also fun to read, and I want to have fun. I’m of the cassette mix-tape generation, so the move from bouncy-bassline joy to heavy-heartbreak guitar is something I hoped to get in this book. Visible joins, romantic agenda. The switch from the looseness and violence of nonsense verse to the exactitude of essay should be reflected in the way it’s read and I hope it might be interesting to hear. Or maybe I just want to give the bored book festival attendee some foul English sentiment to chew on.

When I was young I was in a music theater troupe. One time I played the part of The Stinky Cheese Man and led the cast around by playing stinky BeBop on my saxophone. Perhaps I’m just trying to recapture the excitement of that. The freedom of the jam session combined with the deep pleasure of the rigorously scripted.

CL: Aha! A musical theater background. It never really leaves you. You’re also an editor at Granta for an incredible range of writers like Will Boast, Patrick deWitt, Han King, Ellie Catton, etc. Do you see a common thread between your writing and editing practices? Or do you approach these two jobs with different sides of yourself?

MP: I imagined it would be two different hats, but it quickly became apparent that it’s the same thing. The figuring out of how best to convey ideas, what structure, narrative shape and the architecture of plot can do. I’m a discursive editor, and turned out to be quite a discursive writer, so the discussions have simply deepened. My authors could probably accuse me of having been a little distracted this year, a little slower to reply to their ENDLESS TERRIBLE NEEDINESS, but I think they recognized that I wrote a book I needed to write and it might have made me better in some ways at my day job. I’m certainly more empathetic to an author’s vulnerability now, to some of the practical obligations and tender spots of the process. Knowing what it’s like to be edited, copy-edited, publicized, badly reviewed, positively reviewed, acclaimed, abused… all this helps me—simply—in trying not to be a dick with writers. The janus-faced game; intellectual playmate/market champion. I have felt it, which must be different from merely understanding it. The publication process is exposing and often lonely, so I have been bowled over by the privilege of being surrounded by people that have done it before and suddenly insist that they care for me. Really clever and brilliant writers have held me this year and fed back the support (or indeed carefully measured spoonfuls of instructive pain or mockery) that I have previously fed them. Bitter or delicious. I’ve been very grateful.

CL: I was actually going to ask you about that, and maybe we’ve already talked about this, but publishing a book has this dark side that it seems no one but other authors really see. The more exposure, the darker the dark side gets, it seems to me.

MP: I am pro-choice thin-skinned, so yes there is darkness. But it’s generative, I think. I imagined I might toughen up, but I became paper-light. Which leads me to think a lot about the bullshit inherent in any notion of toughness, the possibilities of fear and fragility. And also the great ways in which one suddenly has perspective and realizes a change has occurred. I also have the magnificent life-line of young kids. If I am sitting gazing at one-star reviews, considering the loneliness of being misunderstood, the agony of exposure, the pain of creation, then a little guy wandering in with his underpants on his head saying “Dad, check out my butt-arse face” can really help.

CL: We talked a little in Adelaide about how you don’t think of yourself as a writer, still, despite having written and published a book. When will this madness stop?

MP: This madness will stop when I sit down and start a new thing. Grief is my love letter to my Dad, to my brother, my wife, my kids, Dickinson, Hughes, kid’s books, fables, Nasty England, much more besides. It boiled out tangled up with my life and I’m glad it did, but it’s got to be different next time.

I will think of myself as a writer when I sit down in a quiet room, face whatever pressures are inherent or invented, and write a story from scratch. For writing. Because I want to write. 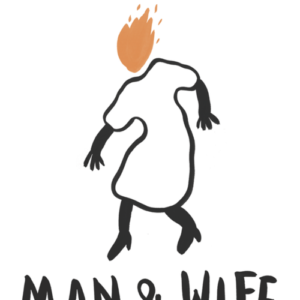 We’d been settled at the camp only a year, though Momma said it may as well have been forever. She missed having walls...
© LitHub
Back to top