"You Have to Take the Dive"

Today, if you can believe it, is the fifth anniversary of Maurice Sendak’s death. The beloved author and illustrator held pride of place in my childhood home—I grew up reading not only Where the Wild Things Are but Outside Over There and The Nutshell Library and I Saw Esau and Let’s Be Enemies—and if you ask me, he’s one of the rare geniuses of our time. He was also a funny, often crotchety old man, with a lot to say about the creative process and children’s books—or books that, as he specifies in almost every interview, he writes and children decide they like to read. To celebrate the life of the great artist—and try, as ever, to emulate him a little more—I’ve collected some of his words on art, art-making, and the creative life.

On how to make art:

Herman Melville said that artists have to take a dive, and either you hit your head on a rock and it splits your skull and you die, or, that blow to your head is so inspiring that you come back up and you do the best work you ever did. But—you have to take the dive. And you do not know what the result will be. —from a 2011 TateShots feature

Artistic style is only a means to an end, and the more styles you have, the better. To get trapped in a style is to lose all flexibility. If you have only one style, then you’re going to do the same book over and over, which is pretty dull. Lots of styles permit you to walk in and out of books. So, develop a fine style, a fat style, and fairly slim style, and a really rough style.

As an aspiring artist, you should strive for originality of vision. Have something to say and a fresh way of saying it. No story is worth the writing, no picture worth the making, if it’s not the work of the imagination. —from Artist to Artist: 23 Major Illustrators Talk to Children About Their Art

Knowledge is the driving force that puts creative passion to work. —from a 1961 letter to Ursula Nordstrom

Certainly we want to protect our children from new and painful experiences that are beyond their emotional comprehension and that intensify anxiety; and to a point we can prevent premature exposure to such experiences. That is obvious. But what is just as obvious—and what is too often overlooked—is the fact that from their earliest years children live on familiar terms with disrupting emotions, that fear and anxiety are an intrinsic part of their everyday lives, that they continually cope with frustration as  best they can. And it is through fantasy that children achieve catharsis. It is the best means they have for taming Wild Things. It is my involvement with this inescapable fact of childhood—the awful vulnerability of children and their struggle to make themselves King of All Wild Things—that gives my work whatever truth and passion it may have. —from Maurice Sendak’s 1964 Caldecott Medal Acceptance Speech

During my early teens I spent hundreds of hours sitting at my window, sketching neighborhood children at play. I sketched and listened, and those notebooks became the fertile field of my work later on. There is not a book I have written or a picture I have drawn that does not, in some way, owe them its existence. —from Maurice Sendak’s 1964 Caldecott Medal Acceptance Speech

I don’t think about [whether something’s appropriate for children]. I just want to be taken up by an idea and get all excited. And put Mozarts’s symphonies on a player and get more excited. —from a 2011 interview with Joe Fassler

If I have an unusual gift, it’s not that I draw particularly better than other people—I’ve never fooled myself about that. Rather it’s that I remember things other people don’t recall: the sounds and feelings and images—the emotional quality—of particular moments in childhood. Happily an essential part of myself—my dreaming life—still lives in the light of childhood. —from Artist to Artist: 23 Major Illustrators Talk to Children About Their Art

I always wrote, from way back when, I wrote stories. This was kind of a family occupation, we all wrote stories at home. But I didn’t publish anything, officially, until ’57. But if you’re an illustrator, you’re almost a writer. Or you want to be a writer. You sort of hug words when you illustrate a book. And so eventually you do think you’re gonna be a writer, and then hopefully you become a writer. —from a 1970 interview with Studs Terkel

It often happens this way—you work for years and years until something eventually appears. I didn’t know [Bumble] was going to be a pig, I didn’t know all kinds of things when I began. But then I began fresh all over again. I don’t know how long it took me in the long run—but this notion that I suddenly sat up in bed, had an idea, and sat down and did the book is kind of silly. It’s been around my neck for a long time. And I’m so glad it’s finished, it’s published, and out of my life. —from a 2011 interview with Joe Fassler

I don’t set out to write for children; I mean I don’t consciously write a book for some imaginary child. I just write the book because I have to. So it can’t be condescending; I don’t have any audience in mind except my own pleasure. And I would never condescend to myself if I could help it. —from a 1970 interview with Studs Terkel

On the importance of art in everyday life:

Art has always been my salvation. And my gods are Herman Melville, Emily Dickinson, Mozart. I believe in them with all my heart. And when Mozart is playing in my room, I am in conjunction with something I can’t explain. I don’t need to. I know that if there’s a purpose for life, it was for me to hear Mozart. Or if I walk in the woods and I see an animal, the purpose of my life was to see that animal. I can recollect it, I can notice it. I’m here to take note of. And that is beyond my ego, beyond anything that belongs to me, an observer, an observer. —from a 2004 interview with Bill Moyers

Well, that’s what art is. I mean, you don’t make up stories. You live your life. —from a 2004 interview with Bill Moyers

I have a fellowship that started last year, two men and two women living in a house, and I go over when they want me to critique or whatever the hell. I just talk dirty. They’re nice people. Young. It’s probably not very original, but old artists like to have young artists around… to destroy. I’m joking. I really want to help them. But publishing is such an outrageously stupid profession. Or has become so.
…
Well, nobody knows what they’re doing. I wonder if that’s always been true. I think being old is very fortunate right now. I want to get out of this as soon as possible. It’s terrible. And the great days in the 1950s and after the war, when publishing children’s books was youthful and fun… it really was. It’s not just looking back and pretending that it was good. It was good. And now it’s just stupid….Because of Rupert Murdoch. His name should be what everything is called now. —from a 2012 interview with Emma Brockes 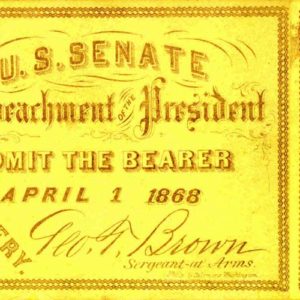 THE MOST ACCIDENTAL OF PRESIDENTS Like Donald Trump, hardly anyone expected Andrew Johnson to become president of the United...
© LitHub
Back to top