“From these experiences, I learned that nothing was glamorous.”

When Reviving Ophelia rocketed to number one on the New York Times bestseller list, I was not prepared. I had expected that my main reward for writing this book would be learning to write with a New York editor. Instead, I was catapulted into a spotlight, something I had never wanted.

The first effect of this spotlight was that people began to treat me differently. Even my extended family teased me about being famous. Some people in our community who had never spoken to me invited me to dinner. People on the street recognized me, but I didn’t recognize them. I felt bad that I might be hurting their feelings. When I went to parties or events, I pushed myself to speak to everyone so that no one would think that I was snobby. All this effort to reassure people I liked them wore me out.

Like many midwestern women, I had been taught never to stand out or consider myself special. Besides, I knew I wasn’t the best writer, even in my own writing group. I had just written some new ideas based on my experiences as a therapist.

I was bombarded by requests to speak, to consult, to do interviews, to co-write books, and to sign book deals. I was asked to do everything from being on corporate boards to giving product endorsements and to helping distraught parents of adolescent girls find a therapist. I didn’t have enough hours in the day to respond to all these requests.

Glamor was in the eye of the beholder, not the person performing or working in the spotlight.

Jim took over almost all the responsibilities for answering the phone and dealing with requests. This soon became an eight-hour workday for him. He was a kind therapist who spent many hours a day as a free referral service. This was before email and the internet and everything was done with paper or telephones.

I was still working as a therapist, and now I was writing a new book. I also had speeches to prepare. I woke at four in the morning to try to keep up with this schedule.

After dinner, Jim and I would take a walk and discuss the difficult issues that had come up that day. We devised policies that helped us make decisions quickly. I wouldn’t do product endorsements or be on corporate boards. I didn’t want to co-write books or consult. But I would do interviews and help promote my books.

On the road making speeches, I was green as grass. At first, I traveled alone, flying mostly to the East and West Coasts. The people I met were pleasant, but I was continually stressed. I worried about missing flights and the responsibility of earning the money I was being paid. I wondered if I would have the energy to be kind and attentive to the hundreds of strangers who would want a word with me.

Meanwhile, I had trouble meeting my own basic needs. I could not sleep in new settings. Some of the places I spent the night made me crazy. For example, at a private girl’s school in the Northeast, I was lodged in a museum, and the doors were locked at night. It was a roomy, dark, old building with an ancient bedroom for me. But I hadn’t had any dinner, I couldn’t get out of the place, and there was no way for me to use a telephone, as the switchboard operator had gone home.

Another time, my bedroom was in an administration building, and, at two in the morning, the cleaning crew came in and vacuumed around my bed. I never returned to sleep. At one point, I did a two-day workshop for professionals in Illinois. Knowing I would be in front of large crowds of psychologists, I was unable to sleep at all during the two nights I worked there. By the end of the second day, I couldn’t hold my thoughts together. I was in front of five hundred people and forgetting the beginning of my sentence before I reached the end.

To feel truly alive, I needed the sights, sounds, and smells of home.

One year I slept more in hotel rooms than in my own bed. As my public persona grew, my real self became smaller and more fragile. I discovered I was a person who only did well around familiar people in my own territory. I needed that grounding to stay calm and to sleep at night.

This all came to a head at a November gig in 2002 in Defiance, Ohio. Jim and I flew on three different planes through snow to an airport a couple of hours from the small college where I was speaking. Two of the planes had experienced engine trouble, and by the time we reached the airport, both of us were exhausted from the stress of the flights. We were also hungry, and I was giving a speech that night. But we were driving through a desolate landscape of mostly industrial parks and empty fields.

Finally, we stopped at a small-town café. There were dead flies around the inside windows and dust on some of the tables, but we had no alternative. I needed to eat before I spoke. I had been reading Fast Food Nation on the plane and was even more concerned than usual that my food be healthy. Jim and I ordered bowls of chili. When this chili came and I tasted it, I thought it tasted like actual shit.

I didn’t finish the bowl, and I told Jim that either we were in a place where we were eating fecal matter for dinner or I was so messed up that I was imagining I was eating fecal matter. “Either way,” I said, “I need to get off the road.”

That winter I stayed home. I lay on the couch by my fire with my little cat on my lap and read big history books. I didn’t have the energy to see my friends. My blood pressure was high and I started on medication. I also began reading about Buddhism and meditating.

By spring, I was doing some speaking again, but with a greatly curtailed schedule.

From these experiences, I learned that nothing was glamorous. Glamor was in the eye of the beholder, not the person performing or working in the spotlight. Expensive hotel rooms and bouquets of flowers were no substitute for watching the stars blink on and the sun and moon rise. Kind people in book lines did not keep me from missing my friends. To feel truly alive, I needed the sights, sounds, and smells of home. 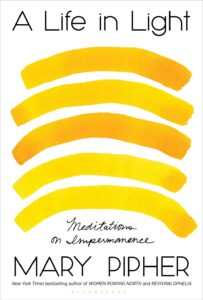 Excerpted from A Life in Light: Meditations on Impermanence by Mary Pipher. Copyright © 2022. Available from Bloomsbury.

Mary Pipher is a psychologist who has earned her the title of “cultural therapist” for her generation. She is the author of four New York Times bestsellers, including Reviving Ophelia, The Shelter of Each Other, Another Country and most recently, Women Rowing North. She lives in Lincoln, Nebraska.

"What the Seas Would Make Us." A Poem By CJ Evans 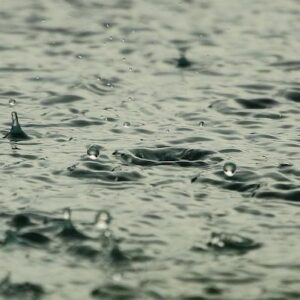 "What the Seas Would Make Us." A Poem By CJ Evans

I don’t know how to tell you about the rain. It falls as if all these woods weren’t owned. It bends the arcs of...
© LitHub
Back to top
Loading Comments...