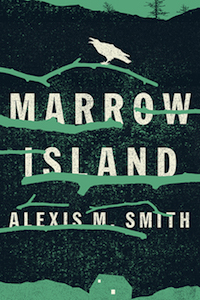 The following is from Alexis M. Smith's novel, Marrow Island. Alexis M. Smith was born and raised in the Pacific Northwest. Her debut novel, Glaciers, has been translated into Spanish and Italian. It was a finalist for the Ken Kesey Award for Fiction and a World Book Night 2013 selection. Alexis attended Mount Holyoke College, Portland State University, and holds an MFA from Goddard College. She lives with her son in Portland, Oregon.

This was my last glimpse of Marrow Island before the boat pulled away: brown and green uniforms clustered on the beach, tramping up the hill to the chapel and through the trees to the cottages of Marrow Colony. The boat wasn’t moving yet, but the uniforms already seemed to be getting smaller, receding from my sight, shrinking into a diorama, a miniature scene of the crime.

Carey had helped me into the boat. I sank to the wheelhouse deck and curled into myself, sitting knees to chest, spine to prow. Joshua Coombs was calling out on the radio, requesting an ambulance to meet us in Anacortes. Katie tried to come aboard, but Carey hollered something to her and she ran back up the dock. He squatted next to me and spoke softly, just by my ear.

“We need to take off your clothes.”

They were soaked through; I wouldn’t be warm until I was dry. I understood that this was first aid; I understood that he was doing his job as the park ranger. I just didn’t have it in me to participate in my own rescue. I was spent, scraped, and bruised. I leaned into him, eyes closing.

“Stay awake, Lucie,” he said. “A little longer. Listen to my voice.”

He lowered me carefully to my back, his parka under my head, and called to Coombs for scissors.

Carey kept talking, narrating as he undressed me, threading one arm through a sleeve, gently rolling me, tugging the shirt up my torso, lifting my head. I knew his hands were on me, but through my cold flesh they felt like the mitts of a giant, huge and heavy. He took off my socks—my shoes were long gone, in the field? in the ruins? in the woods? — and cradled my heel in his palm as he lowered it to the deck. My thoughts had stopped making sense; I tried to visualize Carey’s words as he spoke, I have to cut these off. Then he slid the small sharp scissors up the outside of my leg through my jeans. He hesitated around my hip.

“Please try — can you be very still?” he asked.

I was shivering uncontrollably. He rubbed my legs up and down under a blanket, telling me about circulation, about blood, about heat. I drifted.

Coombs was starting the boat. Katie came back with more blankets. Carey told Katie to get down on the deck and wrap herself around me. She lay down beside me on Carey’s parka, pulled me into her body, and rubbed my arms and back. He covered us both with the two blankets.

I breathed into the wool as the boat lurched through the swells, nausea rising up instantly. Katie seemed never to stop panting from her run up the shore. The bass beat of her heart, the thrust of the boat through the waves, and the feeling of fullness at the back of my throat. I wanted to purge everything inside me, but my bearings held.

At the hospital in Anacortes, they treated me for hypothermia, but they were confused; I was going through more than one kind of shock. Carey told them I’d been lost on Marrow Island overnight—he didn’t know the rest of it yet—and they saw his uniform and took his word. When they asked me what and when I had last eaten, I shrugged, though I remembered my last meal well—the mussels, the heady broth, the bread, the wine, and the birch liquor — and the cramps in my stomach that started not long after. The memory of food brought on the first hunger pangs; the craving for energy, for heat, my metabolism waking up. They were so strong they stabbed at my guts, but the nausea lingered. I couldn’t imagine putting something in my mouth, tasting, swallowing.

Katie told the intake nurse she was my sister, and I didn’t correct her. They let her sit by my bed all night.

“I’m not leaving you alone with her,” Carey told me. She was standing right beside him when he said it, but she didn’t defend herself. I didn’t know what to say; I wanted them both.

Katie held my hand for hours, while my temperature rose and patches of my flesh became livid. I could feel the drunken movement of blood and plasma through my body, my cheeks throbbing, my toes and fingers buzzing. My breasts felt like meat cold from a locker. Eventually Katie slept, head next to mine, nose to my cheek, like when we were girls, like that first night after the quake, clinging to each other under a Mylar sheet in the gymnasium. I listened to her sleep; I felt her moving through her dreams.

Carey sat in a chair by the door, waiting for the sheriff, though he shouldn’t have—he should have been back on Marrow at his post, taking the state troopers through the woods, writing official reports. Soon enough everyone would be looking for all of us, with questions. But they would find what they were looking for at the Colony without our help. And by the time they asked me to tell my part, they would have a story of their own and they wouldn’t veer from it, no matter the details I offered.

My notes were probably already in the sea or burnt to ashes. I tried to reconstruct the days in my mind, building a timeline, sorting details, drawing up the images of pictures I had taken, of things I had seen. I cataloged the different scents in the layered stench I gave off: conifer needles, stump rot, burnt lichen, fungi spores — all washed with the yeasty brine of bodies. Mostly my body. But other bodies, too.

In the weeks after, back in the city, I woke alone in my third-floor apartment every morning. Outside, buses lumbered down Fremont Street, shopkeepers turned over their Open signs, people drank their coffee, checked their phones, walked their dogs. The city repeated its relentless, noisy cycle just like it had every day before and after that week I spent on Marrow. I listened, I watched. After the May Day Quake, over twenty years before, Seattle had rebuilt itself, from concrete rubble heap back to silver city, lessons learned, so we tell ourselves. Otherwise, what was the point of it all? What unlikely comfort we find in the refrain build, destroy, repeat. There are always survivors left to pick up the pieces. There’s always someone to tell the tale.

I had my own refrain: I told the story of those days on Marrow hundreds of times in the first few months — to the state police and the FBI, the grand jury, to my fellow journalists, to the editors who wanted me to write a book, even — because of Sister J. — the archbishop of the Seattle Diocese. I answered their questions honestly, and all the details were true, but the telling began to feel like a betrayal. I told them the story and they typed it up and it became tabloid-television lurid. Marrow Colony as cult. Marrow Colony as failed utopia.

From my hospital bed, from my apartment, from the courtroom, I saw Marrow Island and Sister’s Colony pillaged, and all the people there who were scraping out a little space for themselves — their only hope to live gratefully, daily, in the service of the planet — they were evicted, displaced, incarcerated.

Now I am five hundred miles away in the dry, pine-scattered forests of eastern Oregon, but every time I dream, I find myself back on the islands. In some dreams, I relive the events as they happened. In others, I realize I’m dreaming, and I try to undo the past, to make different choices. Either way I wake up feeling lost. How did I get here? How did this happen? I might be the only one left who knows.

The newspapers have moved on to other catastrophes. The Colony’s history will fade into the archives; the colonists will become ghosts. No one will remember the names of those who performed a miracle on Marrow Island. I have never said so to anyone—not even Carey—but I forgive them. I forgive them for trying to kill me.

On the Invisibility of Middle-Aged Women 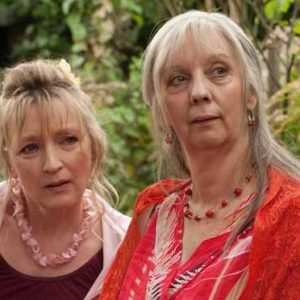 On the Invisibility of Middle-Aged Women A year ago at a literary festival in Wales, I met a woman. It was at a reception at a castle that had a beautiful park and a regal...
© LitHub
Back to top